Please ensure Javascript is enabled for purposes of website accessibility
Log In Help Join The Motley Fool
Free Article Join Over 1 Million Premium Members And Get More In-Depth Stock Guidance and Research
By Rich Duprey – Sep 18, 2019 at 10:01AM

But the megabrewer may dilute its effectiveness in trying to catch up to the lead hard seltzers.

Anheuser-Busch InBev (BUD 1.53%) badly misjudged the hard seltzer market and is now trying to make up for lost time.

Despite being an early entrant in what has exploded into a national phenomenon, the megabrewer seems to have made a number of missteps and now needs to retool to more fully capture the beverage's potential. Anheuser-Busch is reportedly planning to launch a Bud Light hard seltzer brand, its third entry after Bon & Viv and Natty Light hard seltzer. 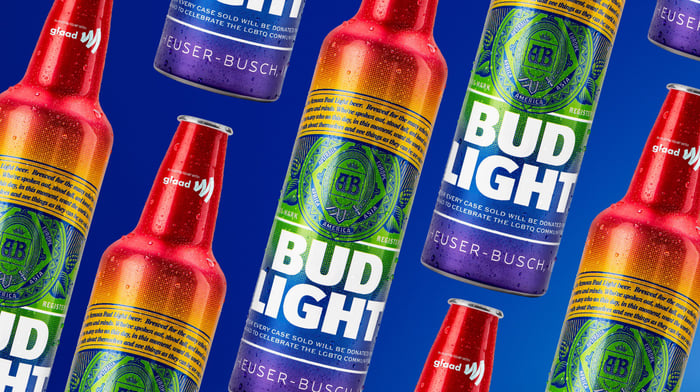 Hard seltzer, of course, is all the rage this year, exploding into the drinking public's consciousness and fueling meteoric industry sales growth. Analysts predict it will become a $2.5 billion industry by 2021, as sales tripled over the past year and were up 164% in July alone. Wags called it the "summer of seltzer."

The flavored malt beverage has been around for more than a few years. Coors was actually first to market in 1993 with Zima, though at the time, it was seen as something of a weird drink and never caught on. One of the industry's later pioneers was Boathouse Brewing, which launched Spiked Seltzer in 2013, but it, too, was early and got overshadowed by the hard soda fad.

That drink experienced a "boom splat" phenomenon, however, as sales initially soared but cratered soon afterward as increasingly health-conscious drinkers worried about the substantial amount of sugar hard soda contained.

That positioned hard seltzer as a perfect alternative, because it was light, low in calories, low in sugar, and refreshing. For brewers still suffering from declining beer sales, making the flavored malt beverage was right in their wheelhouse.

It was in 2016 that hard seltzer seemed to really catch on. Mark Anthony Group, the maker of Mike's Hard Lemonade, came out with White Claw, followed by Boston Beer (SAM 1.63%) and its Truly brand. While Anheuser-Busch dabbled in seltzer with its Two Cents Spirited Seltzer, it opted not to reinvent the wheel and bought Boathouse later that year and rebranded its Spiked Seltzer as Bon & Viv.

But that's where the megabrewer made its first mistake. Although hard seltzer appeals equally to women and men, Anheuser-Busch seemed to think of it more along the lines of a wine spritzer-type beverage and marketed it to women. White Claw and Truly didn't limit their audience to one gender, and today they account for nearly 85% of the hard seltzer market.

Apparently Anheuser-Busch realized the error of its ways. Earlier this year, it ran advertising for Bon & Viv during the Super Bowl and subsequently secured it the rights to be the official hard seltzer of the National Football League. It then sought to tap into the college crowd by launching a Natty Light version, a lower-cost, higher-alcohol extension of its Natural Light brand, the sixth-biggest-selling beer in the country. Now Anheuser-Busch is coming out with a Bud Light hard seltzer.

With a near-16% share, Bud Light is still the top-selling beer, but sales are in serious decline, falling almost 8% through August. Tying it to a hard seltzer brand could help keep it afloat, much the way Bud Light Lime-a-Ritas staunched some of the hemorrhaging.

Yet it also means Anheuser-Busch has been spinning its wheels for three years. Because it didn't realize hard seltzer's potential, it didn't lead with its strongest brand and now risks diluting its efforts because it has three hard seltzer brands on the market. A more focused effort behind its best-selling beer would have been best if it wanted to grow its business and capture share.

Although it may be in luck because of a nationwide White Claw shortage due to high demand, the market is still flooded with hard seltzer options, and Anheuser-Busch may find it is only watering down its own efforts by adding yet another one to the mix.