Please ensure Javascript is enabled for purposes of website accessibility
Log In Help Join The Motley Fool
Free Article Join Over 1 Million Premium Members And Get More In-Depth Stock Guidance and Research
By Dan Caplinger - Oct 23, 2019 at 11:21AM

Markets were once again mixed on Wednesday morning.

Wall Street got pulled in different directions again on Wednesday morning, continuing a trend of mixed news that investors have had to endure for the past couple of days now. Without any big developments on the global macroeconomic or geopolitical fronts, there haven't been any clear catalysts to send the market in a particular direction. As of 11 a.m. EDT, the Dow Jones Industrial Average (^DJI 0.00%) was up 71 points to 26,859. The S&P 500 (^GSPC 2.13%) climbed 4 points to 3,000, and the Nasdaq Composite (^IXIC 0.00%) was higher by 5 points to 8,110.

Earnings continued to play a key role in the direction of individual stocks, and Caterpillar's (CAT 2.52%) latest results showed a downbeat view of economic activity from the perspective of the construction equipment industry. Meanwhile, Nike (NKE 2.75%) named a new CEO.

Shares of Caterpillar were down almost 1% Wednesday morning after the maker of construction and industrial equipment reported its third-quarter financial results. On their face, the numbers reflected the weakness in the global economy. Sales fell 6% from year-ago levels, and earnings declined 8% on a per-share basis. 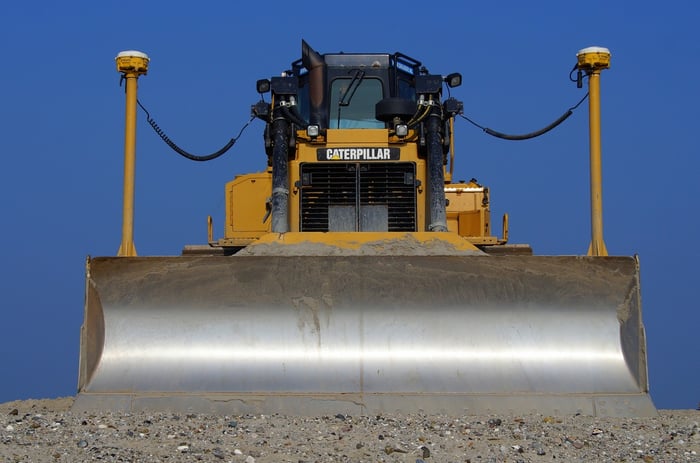 Caterpillar blamed much of the sales shortfall on a change in the way its dealers handled inventory. Last year, dealers had boosted their inventory levels by $800 million in the third quarter. This time around, however, dealers actually decreased their inventories by $400 million. That $1.2 billion swing represented a revenue growth shift of roughly 9 percentage points.

Yet CEO Jim Umpleby admitted that there was more going on than inventory movements. "End-user demand," Umpleby said, "while positive, was lower than our expectations." Moreover, the CEO noted that Caterpillar now expects flat end-user demand for the fourth quarter as well.

In response, Caterpillar cut its earnings guidance for the full year, setting a new range of $10.90 to $11.40 per share on the bottom line. That's a far cry from the $12.06-$13.06 range Caterpillar had previously hoped to achieve, and with plenty of uncertainty on the global trade front, some fear that things could get worse for the construction equipment manufacturer before they get better.

Nike just does it

Meanwhile, Nike saw its stock drop 2%. The athletic footwear and apparel giant announced that it had named a new CEO, continuing a trend of executive shifts among several companies -- including a key competitor.

Nike said that it had chosen John Donahoe as its new chief executive officer, effective Jan. 13, 2020. Donahoe was previously the CEO at ServiceNow, but he had also been a member of the Nike board of directors since 2014. Outgoing CEO Mark Parker will retain his role as board chair and work closely with Donahoe and his senior management team.

At first, the new CEO's tech background might not seem entirely relevant to Nike's business. Yet Donahoe was also chief executive at online marketplace giant eBay, giving him relevant experience in the sale and marketing of retail goods. Donahoe was also chair of PayPal Holdings, tapping him into the payment processing side of retail.

Nike is working hard to move past its traditional wholesale distribution business model to incorporate more direct-to-consumer sales. With his array of experience, Donahoe looks like a logical choice to spearhead that movement and help Nike take the next steps toward maximizing its brand value.