Let's analyze the company's prospects ahead of the upcoming earnings report.

The upcoming third quarter isn't likely to be a vintage one for Caterpillar (CAT 1.46%). The company's headwinds have been growing, and a combination of industry dynamics and macroeconomic difficulties threatens its near-term outlook. Let's take a look ahead at why it's set to be a tricky period for the company. 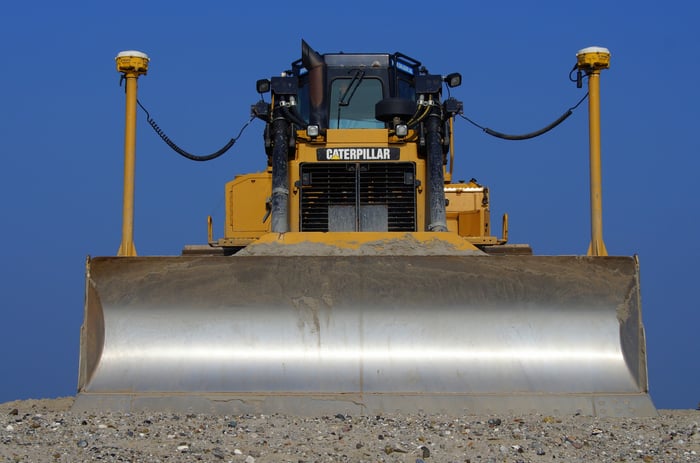 It's clear that the construction segment of the business is the largest profit generator, but the change in profit -- the key swing factor in determining the stock's prospects -- was pretty much split among the three equipment segments in 2018.

Unfortunately, all three faced difficult conditions in the third quarter.

Readers have already seen how a host of information from engine and component manufacturer Cummins (CMI 1.73%), which raised red flags for Caterpillar, not least the concern that China's construction industry is on the slide. As we shall see in a moment Cummins's management had some cautionary commentary on the outlook for oil & gas and mining spending in 2019 -- key end markets for Caterpillar.

In addition to the macro-economic challenges, CFO Andrew Bonfield talked of "pricing pressures from local competitors" during the second-quarter earnings call.

Furthermore, a look at industrial supply company Fastenal's (FAST 2.24%) monthly sales data for its construction (nonresidential) end market shows a clear slowdown, and this could feed through into weak orders for Caterpillar. 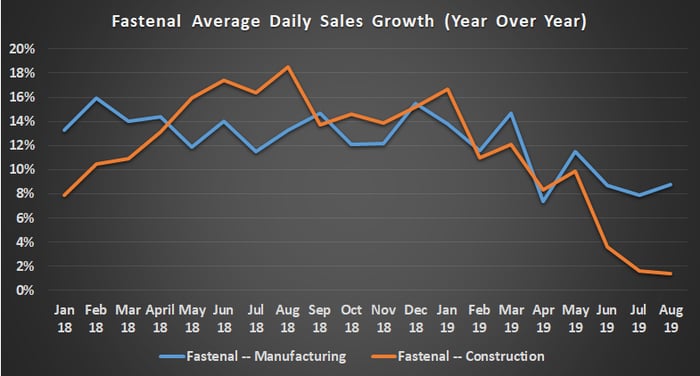 Of course, this is the last thing that Caterpillar needs, because on the last earnings call, Bonfield said that he expected dealer inventories to rise by $900 million in 2019 compared to a previous estimate for inventories to be flat last year. On the second-quarter call, Bonfield said about dealer inventory, "We are comfortable that this level is supported by positive end-user demand."

However, if end-market sales growth is slowing (and inventories have already been rising more than previously expected), dealer inventories are likely to go up more, meaning that they are less likely to order more equipment from Caterpillar.

Going into 2019, investors had high hopes that mining companies were on the verge of beginning a long cycle of capital spending following a few years of weakness. Indeed, as you can see below, they have remained strong in 2019 so far. 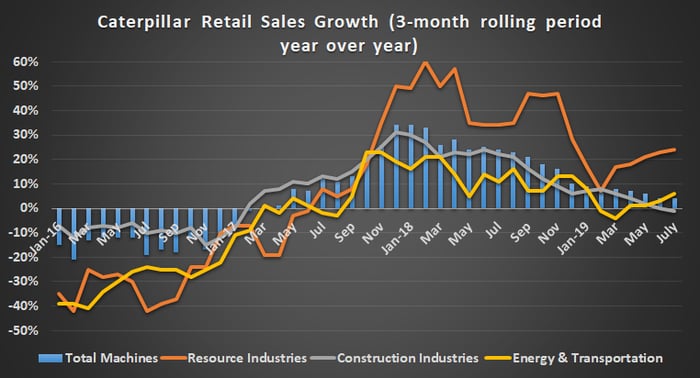 Moreover, a quick survey of the capital spending plans of major miners like Rio Tinto, BHP, and Freeport-McMoRan shows that they remain in place. However, if global growth is slowing, it's likely to take demand for commodities like iron ore, copper, and coal with it.

Cummins CEO Tom Linebarger has talked of mining not looking "like it's at peak, but it's definitely leveled off." The question is whether that leveling off will also be seen in Caterpillar's resource industries sales and whether it's compatible with management's expectations for the segment in 2019.

There are two areas of concern here.

First, Caterpillar is expecting reciprocating engine sales to bounce in the fourth quarter as takeaway capacity comes online in the Permian Basin. However, other companies such as Cummins have been reducing their expectations for spending from the region, and Emerson Electric CEO David Farr has already cited weakness in spending from the Permian Basin this year. Indeed, the management of Emerson's process automation rival, Honeywell, has also spoken of large projects being pushed out.

Second, adoption of precision scheduled railroading (PSR) by nearly all the major railroads in the U.S. is likely to improve the efficiency of rail networks, and history suggests that this will mean a drop in locomotive and railcar equipment demand.

Caterpillar's rival in locomotives, Wabtec (WAB 2.00%), had its CEO Rafael Santana stating on his company's second-quarter earnings call that "precision scheduled railroading is certainly having some effect on new local orders." All told, the longer-term impact of PSR on holding back locomotive order growth is a concern.

The company certainly faces headwinds, but to be fair, a lot of this is probably already priced into the stock. For example, even if Caterpillar only hits the bottom end of its guidance range of $12.06 to $13.06, it will trade on just 10 times earnings. That makes the stock look like a good value, but just be aware that the headline news might not be great in the next six months or so, and the headwinds outlined here might cause a lowering of its earnings outlook in the near term.