Please ensure Javascript is enabled for purposes of website accessibility
Log In Help Join The Motley Fool
Free Article Join Over 1 Million Premium Members And Get More In-Depth Stock Guidance and Research
By Lee Samaha - Updated Aug 20, 2019 at 9:39AM

When peers warn about slowing end markets, it's usually a good idea to take heed.

Some management teams have a tendency to stubbornly hold onto guidance while Rome burns, while others deal with realism, take their medicine early, and prepare to get better. Engine and component manufacturer Cummins (CMI -1.12%) is probably in the latter camp, and management's recent and extensive end-market commentary served as a salutary warning as to what investors in companies might expect later in the year.

Let's take a look at what was said and why it matters.

There's no doubt that many industrial end markets are slowing, with a slew of companies having lowered guidance during the recent earnings season. Cummins was no different, with management lowering its full-year revenue growth estimate to flat from a previous estimate of flat to 4% growth. Moreover, the revenue growth estimate for its most important segment (engine) was taken down to negative 2% to positive 2% from a previous estimate of 1% to 5%. 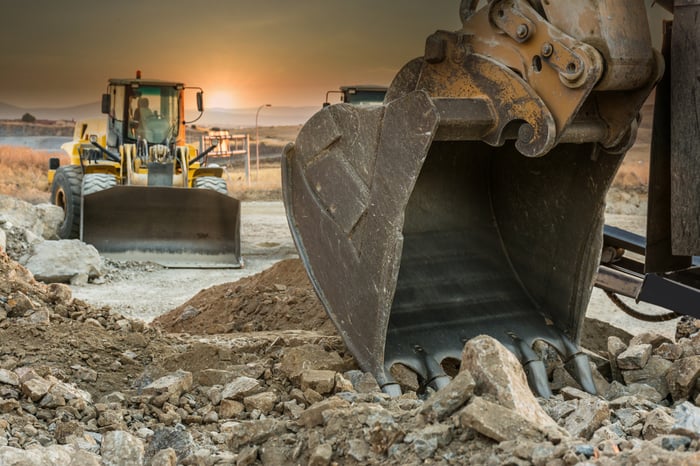 It's not the fact that growth in Cummins's end markets are deteriorating through 2019 -- the market knew that would be the case going into the year -- but rather that the decline is clearly worse than previously expected. In addition, CEO Tom Linebarger served notice that "many of our markets are either at or near cyclical peaks in our view, which means that inevitably, we will start to see some of these markets decline."

In particular, let's focus the commentary on four key end markets, namely trucking, construction, mining, and oil and gas, because what Linebarger said is relevant to shareholders in Caterpillar (CAT 0.73%), Rockwell Automation (ROK -2.21%), and many others.

It's no secret that the trucking market is about to peak, but we've known this for some time. Indeed, it's interesting that management didn't actually take down its forecast for heavy- and medium-duty truck production in the North American free-trade agreement (NAFTA) area and China. However, Linebarger did take down his estimate for this type of truck production in India and Brazil.

He also noted that, "most of the truck markets are at or near peak," and "China looks like it's on the way down," while adding, "it's sort of hard to find a truck market that doesn't feel peakish."

As grim as that outlook sounds, investors shouldn't rush to hit the sell button just yet, because recent history suggests that the time to buy the sector is as industry sales/production starts to turn down. As you can see in the chart below, shares in the sector surged in 2016 even as truck sales turned down. 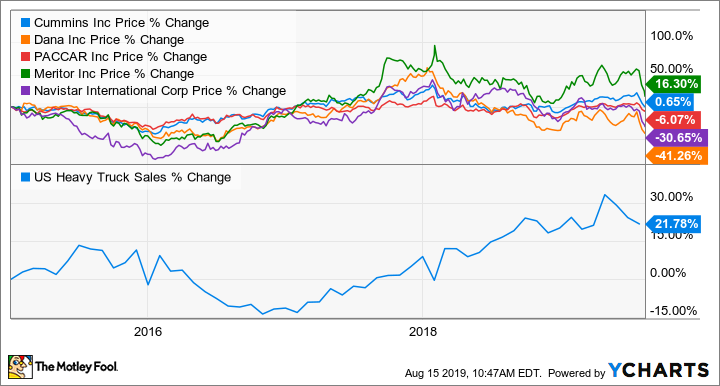 Although Linebarger noted that the U.S. construction market "is still strong," he also said it "feels" like it has to "tail down," while "China has got to start tailing down because China has been up for a while, and unless they continue to stimulate the market, it's likely to head down."

Frankly, this is concerning commentary for a company like Caterpillar, especially as its dealer inventories are running higher than previously expected. Similarly, any weakness in China is going to hit United Technologies' Otis segment and its plans to increase new equipment sales volumes in the world's biggest market.

Caterpillar investors should also be concerned by what Linebarger said about oil and gas and mining. For oil and gas engines, Linebarger said, "we now anticipate sales in North America will decline by 75%, compared to our 60% down expectation three months ago with lower demand for new equipment in the Permian Basin."

If this is indicative of ongoing hesitation in capital spending in the Permian Basin -- something Emerson Electric's management also highlighted, then Caterpillar is likely to disappoint investors because an improvement in spending from the Permian Basin in the fourth quarter is baked into its guidance. Similarly, Rockwell Automation investors are hoping the strength in oil and gas and mining will help offset notable weakness in semiconductor, automotive, and food and beverage -- Emerson Electric also noted weakness in these three areas.

Regarding mining capital spending -- a key battleground for bulls and bears, and an area Caterpillar and Rockwell both hope are in the early innings of a long cycle of growth -- Linebarger gave some sobering commentary: "It doesn't look like it's at peak, but it's definitely leveled off." To be fair, he also said his view was that it could "have a slow growth from here for a little bit longer," but that's hardly the kind of long cycle of growth that Caterpillar, for example, is expecting.

In an odd sense, Cummins' realism shouldn't reflect badly on the company itself. It's never a good thing when a company cuts guidance, but management appears to be taking action ahead of the downturn, and Linebarger believes the company can gain market share in a downturn. Moreover, selling out of trucking-related stocks just as the market starts turning down isn't necessarily the right investing strategy.

However, if Linebarger's oil and gas, mining, and construction commentary proves accurate, then some of its competitors and peers might end up disappointing investors again in the coming quarters.