Please ensure Javascript is enabled for purposes of website accessibility
Log In Help Join The Motley Fool
Free Article Join Over 1 Million Premium Members And Get More In-Depth Stock Guidance and Research
By John Ballard – Updated Oct 23, 2019 at 8:57AM

CEO Bobby Kotick is looking at a 10-year time horizon.

As Activision Blizzard (ATVI -0.83%) winds its way through a transition year, the company continues to invest resources in its esports initiative. Estimates by market researcher Newzoo and Goldman Sachs expect esports to grow into a multibillion-dollar industry within the next three years.

At the front of this emerging form of entertainment is Activision Blizzard's Overwatch League, which has been driving much of the momentum in esports. Since the league was launched in Jan. 2018, Activision has sold 20 teams -- in addition to broadcast deals with Twitch, ESPN, Disney XD, and ABC, as well as major sponsorships with some of the biggest brands in the world. 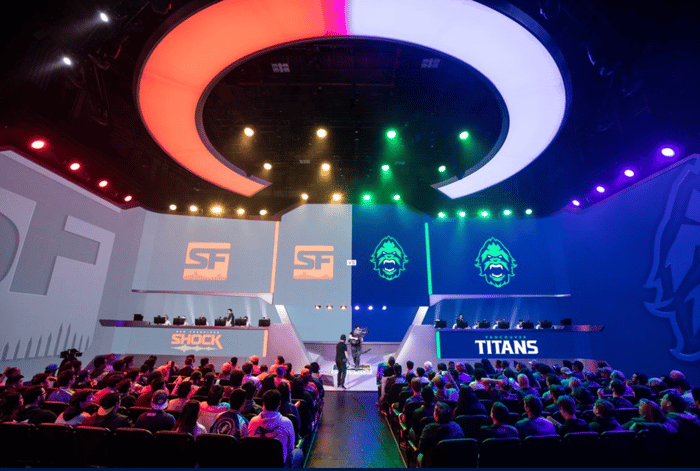 With the worldwide esports audience expected to nearly double to 645 million by 2022, it remains a compelling growth opportunity. But it will take time to turn a meaningful profit for Activision Blizzard. CEO Bobby Kotick recently told CNBC during Overwatch League's Grand Finals event in Philadelphia that he "looks at things on a 10-year time horizon."

Esports is a relatively new business model for the game company, and there's a lot of work to be done to raise awareness and interest. We'll look at some recent signposts that show Activision's esports efforts are progressing well, and what needs to happen for it to scale into a major business.

Where do esports currently stand?

Unfortunately, revenue from esports is still not registering in the company's financial results. The Blizzard segment, which includes revenue from Overwatch League, has experienced a 25% decline in revenue through the first half of 2019. Part of that is due to strong sales in 2018 of the World of Warcraft: Battle of Azeroth expansion, with no comparable sales of the franchise this year. Still, this means that, despite the team sales and sponsorship deals announced over the last year, esports isn't moving the needle for the company.

Furthermore, profits are likely nonexistent at this point, given that the company spent $50 million last year on personnel, facilities, and equipment associated with esports broadcasting and online games.

On the bright side, Activision Blizzard reported double-digit growth in viewership during the second season of Overwatch League based on average minute audience, a metric that calculates the average viewership for a program at a specific interval during the broadcast. The average minute audience for season two of the Overwatch Grand Finals increased by 16% year over year. It's estimated that 1.12 million people tuned in to watch the championship match.

Additionally, Call of Duty World League saw a 50% year-over-year increase in viewership for two events during the second quarter earlier this year. The numbers for Overwatch and Call of Duty are showing progress, but there's potential for much more growth.

Stepping stones for a profitable medium

Esports for Overwatch and Call of Duty feature a city-based league structure, which lays a solid foundation with which to grow a large audience. Like traditional sports, teams in both leagues will begin playing home and away games in their respective cities starting next year.

Cultivating local fan bases for teams is crucial to realizing Kotick's vision for esports. During the first two seasons of Overwatch League, local watch parties started to pop up in different cities, which helped drive merchandise sales. And there was a good turnout for the few games hosted in Dallas and Atlanta earlier this year.

Perhaps the greatest challenge to build a large audience is to improve the viewing experience, which won't be easy for a fast-paced game like Overwatch. The in-game camera is mostly focused on one player's point of view during a match. That leaves viewers mostly relying on the commentators to know what's going on amidst all the chaos.

During the second-quarter conference call, CFO Dennis Durkin said, "There's still a lot of room for further improvement in the viewing experience, and this is a key focus area for us as we think it's critical to continuing to make the broadcast not only compelling but easily digestible for mass-market audiences."

Management has made some adjustments, but this will be an ongoing trial-and-error process.

Ultimately, what drives revenue is people watching games. One indicator that the esports industry is rapidly growing is the rate of increases in player salaries, which have been doubling every two to three years since 2010. Player salaries for any sport come out of the total revenue generated primarily from ticket sales, merchandise, and advertising. The more viewers there are, the more partner brands will line up to put their logo in front of those eyeballs.

As revenue in esports grows, it will attract additional investment. This is how Activision Blizzard was able to sell eight additional teams ahead of season two of Overwatch League. And in August, the league announced a multiyear co-marketing deal with Kellogg, which will kick off next year with Cheez-It and Pringles products featuring Overwatch League branding.

Investors should also keep in mind that professional gaming is new to mainstream entertainment, whereas traditional sports have been around for decades. It's likely going to take several years for team owners to develop a profitable business around local advertising, ticketing, and merchandise sales. The first thing that must be done is to cultivate a large amount of local support around each team, and that won't happen overnight.