Please ensure Javascript is enabled for purposes of website accessibility
Log In Help Join The Motley Fool
Free Article Join Over 1 Million Premium Members And Get More In-Depth Stock Guidance and Research
By Anders Bylund - Oct 24, 2019 at 10:51AM

The bar was set pretty low, but the manufacturing technology specialist exceeded expectations by a wide margin. 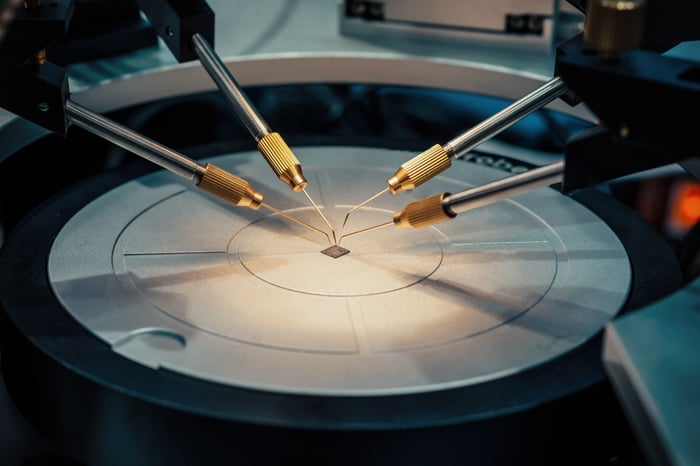 Pearls of wisdom from the executive suite

The company is finding ways to make do despite bumpy and unpredictable market conditions.

"Although our Advanced Markets remain constrained due to global macro-economic and trade uncertainty, we remain very excited about our product and market offerings into 2020 and beyond," said CEO Gerald Colella in a prepared statement.

In other words, MKS Instruments is feeling the pinch from Chinese-American trade tensions and tariffs. Three months ago, Colella explained his modest guidance targets with softening demand for consumer devices, tariffs, and the American import ban on products by major client Huawei. All of these headwinds are still in play.

MKS Instruments set its fourth-quarter revenue guidance at roughly $470 million. At the midpoint of that projected sales level, adjusted earnings should land near $1.02 per share. Both projections are in line with current analyst expectations. The targets, which include significant contributions from the Electro Scientific buyout, can be compared to adjusted earnings of $1.54 per share on $461 million in revenues for the fourth quarter of 2018.

Investors had been expecting a far weaker performance from MKS Instruments. After a 14% jump in after-hours trading, the stock is trading at a reasonable 22 times trailing earnings. Share prices have more than doubled in three years and tripled in half a decade. Despite far from ideal market conditions, MKS Instruments is on a roll.