Please ensure Javascript is enabled for purposes of website accessibility
Free Article Join Over 1 Million Premium Members And Get More In-Depth Stock Guidance and Research
By Beth McKenna - Oct 24, 2019 at 8:21AM

Here's what to watch when the 3D printing company reports Q3 earnings on Nov. 13.

At that time, investors should know how the quarter turned out for its 3D printing rival 3D Systems ( DDD 1.98% ), which is scheduled to release its Q3 results after the market closes on Wednesday, Oct. 30.

Stratasys stock gained 63% in the first half of 2019, thanks in part to first-quarter revenue and earnings soundly beating Wall Street's expectations. Shares have since pulled back considerably. They're up 8.6% so far this year through Oct. 23, trailing the S&P 500's 21.8% return and ahead of 3D Systems stock's 15% loss. 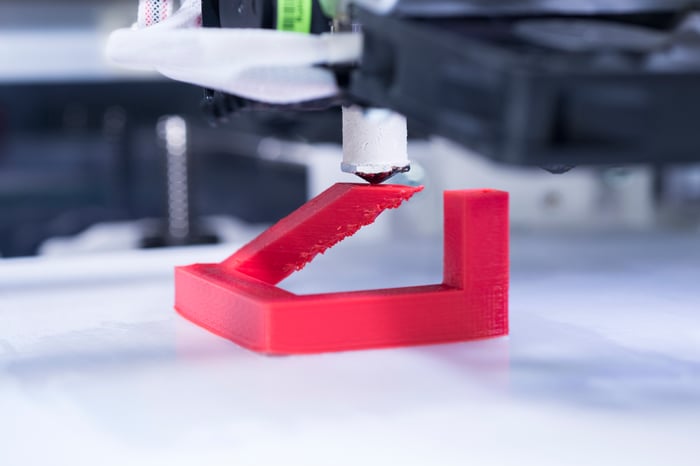 Analysts are expecting Stratasys' headline numbers -- revenue and EPS -- to be the same as they were in the year-ago quarter.

In the second quarter, the company's revenue declined 4.1% year over year to $163.2 million, which management attributed largely to weak demand in Europe due to softening economic conditions. Adjusting for sales of divested entities and the effect of foreign exchange, revenue dropped just 1%. Earnings per share under generally accepted accounting principles (GAAP) flipped from negative to positive, and adjusted EPS rose 6.7% to $0.16.

Stratasys has been without a permanent CEO since last June, when Ilan Levin resigned after leading the company for nearly two years. Elan Jaglom, Stratasys' chairman of the board, has been serving as interim CEO. Investors can expect an update on the CEO search on the earnings call.

It's now getting a bit long for the company to be operating with an interim CEO. My guess is that some investors share this belief and leadership concerns have been a factor in the stock's pullback.

Sales of 3D printers are central to Stratasys' business model in that they drive recurring sales of print materials, which have fat profit margins. In the second quarter, 3D printer revenue fell 10% year over year, or 6% if we exclude divested entities and the impact of foreign exchange -- not a good result, but not as bad as 3D Systems' 27% drop.

Investors will want to monitor Stratasys' operating cash flow. Last quarter, this metric was negative: The company used $3.8 million in cash from operations during the quarter.