I've maintained for quite a while that Vertex Pharmaceuticals (NASDAQ:VRTX) is the best biotech stock on the market. My thinking was -- and is -- that Vertex's virtual monopoly in the cystic fibrosis (CF) market, combined with several shots on goal in treating other diseases, gave it a huge advantage.

But Vertex stock now looks more attractive than ever. In fact, I think the biotech stock is a screaming buy right now thanks to two enormously important things that happened over the last four days. 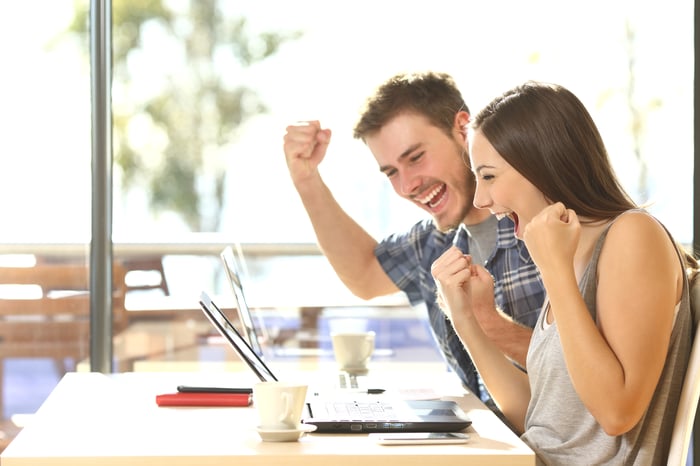 1. Approval for Vertex's most important drug yet

Vertex announced on Monday that the U.S. Food and Drug Administration (FDA) approved Trikafta for treating cystic fibrosis in individuals ages 12 and over who have at least one F508del mutation in the CFTR gene. There are several things you should know about this key FDA approval.

First, it came much earlier than expected. The FDA's deadline for announcing an approval decision was March 19, 2020. For the agency to grant approval barely two months after Vertex's filing is stunning.

Second, approval for Trikafta means that 6,000 Americans with CF who haven't had an effective treatment alternative in the past now will have one. The F508del mutation in the CFTR gene is the most common mutation causing CF. Trikafta, the first triple-drug combination for CF, has the potential to treat up to 90% of all CF patients down the road.

Third, the likely financial impact for Vertex resulting from the drug's approval is significant. Market researcher EvaluatePharma ranked Trikafta as the No. 1 most valuable pipeline program in development earlier this year. The drug is expected to generate sales of $4.3 billion by 2024. To put that into perspective, all three of Vertex's current CF drugs combined made a little over $3 billion last year. There's no question that Trikafta is destined to become the biotech's most important drug yet.

Approvals are one thing; getting paid for a drug is another. Vertex won European approval for Kalydeco in 2012, for Orkambi in 2015, and for Symkevi (marketed under the brand name Symdeko in the U.S. and elsewhere) in 2018. But despite these approvals, none of the drugs were available to patients in England because Vertex and NHS England couldn't reach an agreement on reimbursement -- until now.

On Thursday, Vertex announced that an agreement has been reached with NHS England that makes Kalydeco, Orkambi, and Symkevi available to eligible CF patients in England for all currently approved indications, as well as any future approved indications for the drugs. This deal opens the door for around 5,000 CF patients in England to have access to therapies that treat the underlying cause of the disease.

The United Kingdom is home to more than 10,000 people with CF, ranking the nation second worldwide in prevalence of the disease. Over 8,000 of those individuals with CF live in England. These people now have more hope than ever before.

Vertex now has a newly approved drug that, assuming it goes on to win approvals in Europe and elsewhere, will enable the company to expand its target patient population by more than 50%. It now has reimbursement deals in place for its other three drugs in most of the biggest markets. Vertex is attractive based on its CF opportunities alone. But there's more to the story.

Last month, Vertex announced a $950 million deal to acquire Semma Therapeutics. Semma is working on developing a cure for type 1 diabetes and has made some impressive progress in preclinical testing.

With all of the good news for Vertex, you might think the stock would be ridiculously expensive. That's not the case, though: Vertex shares currently trade at 29 times expected earnings. But with analysts projecting average annual earnings growth of 38% over the next five years, the stock looks cheap when its growth prospects are factored in.

Investing in biotech stocks always comes with risks. Vertex's pipeline candidates could turn out to be duds; the company could run into issues winning reimbursement for Trikafta. But I think the stock's potential for great returns outweighs the risks. In my opinion, Vertex is without question an excellent buy right now.