The stock is set to run higher, perhaps even outpacing the S&P 500.

Athletic apparel giant Nike (NKE 0.85%) has been the king of sportswear for a long time now. Its current focus on digital transformation is paying off, with the Nike Direct business going strong, and international growth has also been impressive. The athletic-wear giant delivered a strong fiscal first-quarter report, which helped boost the shares to a record high.

Nike's stock price is up 30.7% in 2019, and its last earnings report was extremely solid. Over the past three years, sales have grown by 6.42% and earnings have risen by 25.6%. These numbers simply show how strong the financials of the company are. Its only rival, Adidas (ADS -0.77%), has lost several customers to Nike. First-quarter results beat Wall Street expectations, with revenue up 7% to $10.7 billion (10% excluding the effects of foreign currency movements). Revenue was up 12% in the Europe, Africa, and the Middle East division, 13% in Latin America and the Asia-Pacific, and 27% in China. 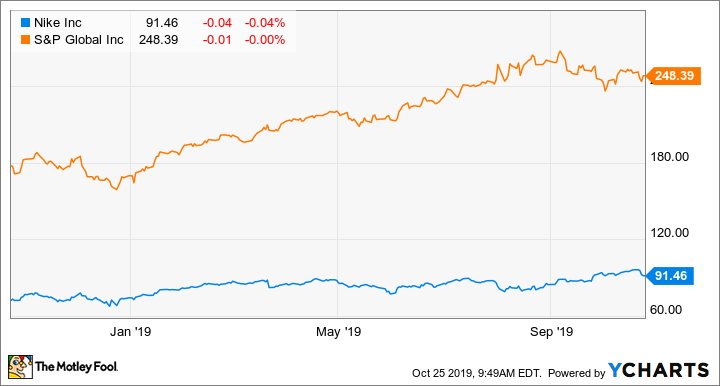 China is a key market

Nike is a market leader in China, and the popularity of the NBA is acting as a key tailwind for growth in the region. Sales shot up 22% to $1.68 billion in the quarter, excluding currency shifts. The NBA is the most popular sports league in China, with more fans than the three largest European soccer leagues combined. As the official sponsor of the league and its top players, Nike has tremendous growth potential in China. That said, a trade war could have an effect on results.

President Trump announced on Aug. 1 that the United States will be levying an additional 10% tariff on $300 billion in Chinese goods; this amount was further raised to 15% on Aug. 23. About 25% of the footwear and apparel produced worldwide comes from China. That said, Nike management has insisted that they can source from factories in other countries to mitigate the effects of these tariffs on the U.S. market.

Nike's earnings have grown by an average of 5% annually for the past three years, with a 42% year over year jump in digital sales in the last quarter. Management expects digital sales to continue to accelerate, and leadership remains focused on reshaping the company's presence in the marketplace over the long term. As noted, momentum remains strong in China, despite the trade-war concerns.

Net income jumped to $1.4 billion, is a 25% increase over the previous year. Earnings per share, boosted by stock buybacks, surged 28% to $0.86 against analyst expectations of just $0.70.

A healthy addition to a portfolio

Wall Street sees Nike as likely to outperform. The company's markets are likely to continue growing, with several upside opportunities (Nike App initiatives, a robust product pipeline, Nike Fit, and other strong productivity strategies). Given a strong dollar and the necessary investments in omnichannel offerings, the brand will remain a stronghold in retail.

Particularly for investors confident in management's focus on digital and international business, this is a solid consumer-goods stock to own and a good time to buy.