Nike (NYSE:NKE) stock is richly valued, and the company's latest quarterly results did a lot to justify the high expectations investors have for this business. Excluding the impact of foreign currency changes, revenue climbed 10% year over year. The sportswear category, including certain products in footwear and apparel, continued to perform well, as Nike finds success mixing style and performance.

But most impressive was Nike's double-digit earnings growth. Margin improvements, which are happening even as the company invests in initiatives to improve its brand's competitive position, benefited the bottom line. In particular, these three numbers from the fiscal first-quarter 2020 report show why investors are willing to pay a premium for Nike stock. 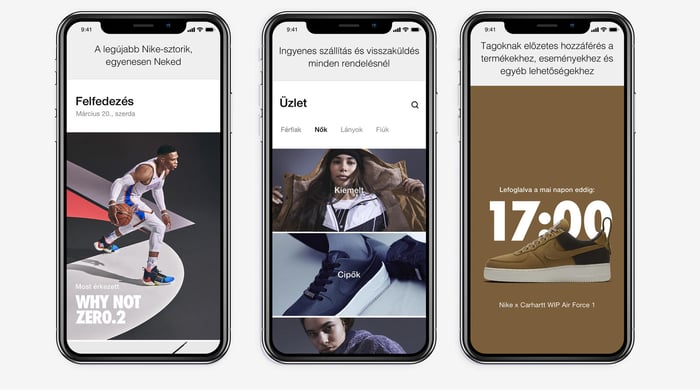 Nike's footwear and apparel continue to experience strong demand. That consumer interest is driving the company's solid top-line performance, but as growth investors know, it's the bottom-line performance that ultimately fuels stock returns. In the fiscal first quarter, net income soared by 25% year over year, and earnings per share rose by 28% -- the difference a result of a lower share count due to management's ongoing stock buyback program.

Net income also got a boost from lower tax rates -- it paid 12.4% in the first quarter compared to 14% a year prior -- but even factoring that out of the equation, Nike still grew its pre-tax income by 23% to $1.561 billion.

That income grew faster than revenue can partly be attributed to the improvement in gross margin, which expanded by 1.5 percentage points to 45.7% for the quarter. Management expects further margin growth through the rest of the fiscal year but of a lesser magnitude than it achieved in this most recent quarter.

2. Demand creation expense up only 6%

Another factor that is benefiting Nike's bottom-line performance is the strength of the brand. In recent years, Nike has been able to maintain revenue growth while keeping a tight lid on demand-creation expenses (which include advertising, marketing, brand events, and more):

Data source: Nike. Years are fiscal years ending in May.

Nike's gross profit in its fiscal first quarter increased by $474 million from $4.397 billion to $4.871 billion. However, demand-creation expenses increased by only $54 million.

Total operating expenses grew by $265 million, which meant roughly half of the increase in gross profit dropped straight to the bottom line, fueling a robust improvement in profit. Pre-tax income improved by 23% to $1.561 billion, up $291 million from the year-ago quarter.

Given the strength of its brand, Nike should be able to continue leveraging any spending it does do to fuel outsized profit growth and use the extra savings to reinvest in technology -- an area where the company is developing a significant competitive advantage.

Because Nike doesn't need to spend as much on expenses like marketing to achieve its desired results, the company can direct more resources toward widening its competitive moat. It's investing in technology in several areas, including innovation, data analytics, and digital commerce platforms like the Nike app and SNKRS app. In addition, Nike recently acquired Celect, a predictive data analytics firm that will help it better anticipate demand. These are the areas that will power Nike's success over the long term, as evidenced by its robust growth in digital sales. Last quarter alone, digital sales were up 42% year over year, adjusted for foreign currency changes.

The company's apps are helping it forge deeper connections with customers. Nike is investing to deliver more personalized shopping experiences, and in this age of e-commerce, digital access to products is essential for growing sales.

Memberships to Nike Plus are proving to be an effective tool for keeping demand-creation spending down. Once customers are signed up, Nike delivers alerts about new product launches and gives members early access. In the last quarter, more than 50% of Nike's digital growth came from these members. Over the last three years, the number of active users across its apps has more than doubled.

That said, since Nike still generates most of its revenue from sales in physical locations, partnerships with retailers such as Foot Locker remain crucial. Stores are valuable touch points in which the company can connect customers with its digital ecosystem. Nike signed up nearly one million new members through its company-owned and factory stores last quarter. Additionally, it's starting to integrate the Nike app experience at Foot Locker stores in North America, as well as its retail partners in Europe and China.

The stellar report has investors feeling good, and the stock has hit new highs in the days following the earnings release. Guidance for the rest of the year looks solid, too. Despite the uncertainty caused by the U.S.-China trade war, management still expects fiscal-year revenue growth to be in the high single-digit percentage range, and gross margin is expected to improve by 50 to 75 basis points. Wall Street analysts expect Nike to grow adjusted EPS by 16% to $2.89, which puts its forward price-to-earnings ratio at 31.9 times currently.

That valuation looks steep, but Nike is a well-oiled machine that continues to squeeze more profits out of its operations while doubling down on its fast-growing digital business.