The personal items company fell more than 5%, which might signal a good time to purchase this defensive stock.

Kimberly Clark (KMB 0.72%) announced its quarterly earnings on Oct. 22. Included in its report was a 1% year-over-year sales increase, led by the personal care segment. The company increased both its organic sales growth and adjusted earnings per share.

Despite that news, Kimberly Clark shares dropped more than 5% in the aftermath, which may have been because its consumer staples competitor Procter & Gamble (PG 1.29%) recently reported a 7% increase in sales. Kimberly Clark owns well-known brands including Kleenex, Scott, Huggies, Kotex, and Cottonelle, firmly placing the company in a defensive industry that should be relatively insulated from the effects of a recession. 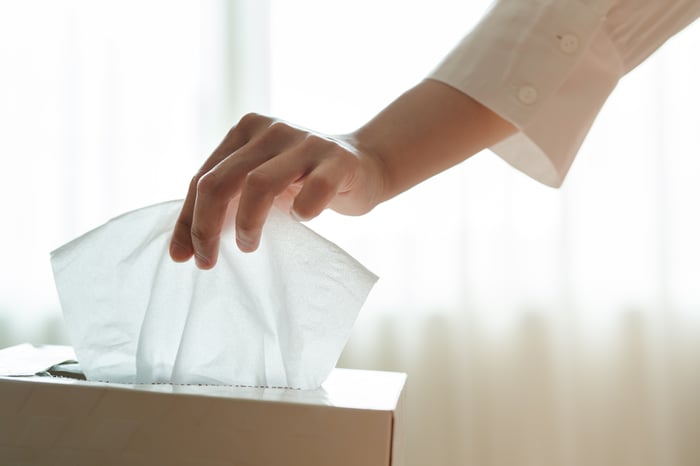 From July 2007 to July 2009, the S&P 500 fell 55%, whereas Kimberly Clark shares only sank 30%. In the recovery since the Great Recession, the stock kept pace with the market up until Q2 2017, at which point it started a year-long slide that pulled back returns.

Such a decline after a ho-hum earnings report is worthy of a deeper look, and it could represent an entry at this point in the market cycle if there are no imminent risks to owning the stock.

Kimberly Clark carries debt, but not enough to warrant concern

The company has a $46 billion market cap with only $90 million of shareholder equity, so its capital structure is debt-heavy, with $7.75 billion in total debt. However, debt-laden balance sheets are common among large caps in the household and personal products industry. In fact, Kimberly Clark's debt to EBITDA ratio of 2.34 is below the industry average of 2.6. The company's 0.81 current ratio is lower than most peers and does not indicate an imminent liquidity risk. Its interest coverage ratio of 10.09 is lower than the peer group average, as well. Despite using substantial debt to finance operations, it would not appear that financial health is a concern.

Kimberly Clark generally maintains a high single-digit to low double-digit net profit margin, which falls within the range of its major peers. The company's management delivers a Return on Invested Capital (ROIC) of 25.08%, which is 11 percentage points above the industry average, indicating that the company is doing an excellent job using its resources to deliver financial returns.

The stock's valuation is a mixed bag

Importantly for investors, Kimberly Clark has a 3.07% dividend yield with an additional 1.6% buyback yield. Only a small number of peer group participants exceed those yields, and the industry average cash dividend yield is 2.69%.

Kimberly Clark is a large, mature company in a defensive, mature sector, and its growth prospects are modest as a result. The bull narrative here is that the stock is unlikely to fall as far as the market in the next downturn, and a healthy dividend yield just got healthier when share prices dropped after earnings. As such, it might have a role in a risk-averse or recession-ready portfolio.