One out of every eight women in the United States will develop breast cancer, according to Breastcancer.org. Of those, about 25% will have an aggressive type called "HER2-positive," which also recurs at higher rates.

The human epidermal growth factor receptor 2 (HER2) gene produces proteins that control breast cell division, growth, and repairs. Too many copies of the gene, or too many receptor proteins, lead to excessive growth of cancer cells. 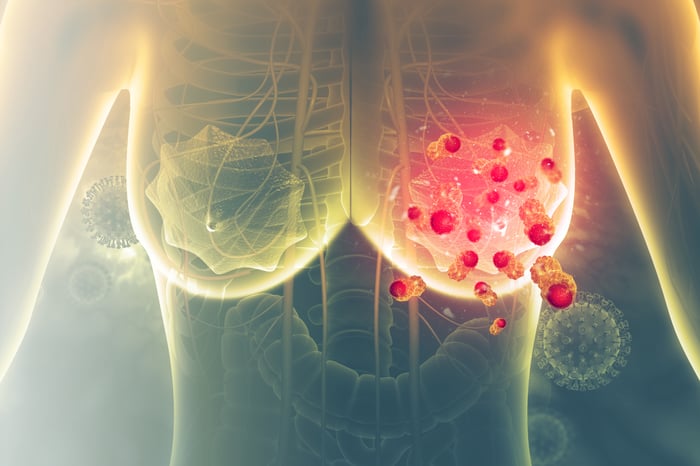 Shares of Seattle Genetics (NASDAQ:SGEN) jumped 15% this week following the announcement of positive clinical trial results for its oral HER2-targeted breast cancer drug tucatinib. Patients in the trial received either trastuzumab and capecitabine, or those two drugs plus tucatinib. The patients had received three prior therapies before entering the trial. Of note: The cancer had spread to the brain in 47% of patients in the trial.

Seattle Genetics highlighted that the trial reached the primary endpoint of progression-free survival. The tucatinib-treated patients had a 46% reduction in risk of disease progression or death. For patients whose cancer had spread to the brain, the drug demonstrated a 52% reduction in disease progression or death. Additional trial endpoints, including overall survival, favored tucatinib treatment.

Seattle Genetics plans to unveil more detailed results from the trial at the San Antonio Breast Cancer Symposium (SABCS) in December. Until then, the company has begun work to gain approval globally, starting with a New Drug Application filing to be submitted to the Food and Drug Administration (FDA) in the first quarter of 2020.

This week did not go so well for MacroGenics (NASDAQ:MGNX). Following a planned interim update on its pivotal phase 3 clinical trial, the stock lost 20% of its value. To add insult to injury, dozens of class-action law firms are lining up to get investors to sue the company based on the results.

The Sophia trial, as it's dubbed, plans to have full results in 2020. The data release this month included a preplanned interim analysis to determine the survival benefit between the treatment arms. Patients receiving margetuximab showed a 1.8-month benefit, increasing survival to 21.6 months compared to 19.8 months. The market's reaction indicates that investors clearly expected to see a greater improvement.

MacroGenics further highlighted that 85% of the patients in the trial had a specific genetic profile. Margetuximab's overall survival benefit in these patients increased to 4.3 months better than the comparator arm. MacroGenics also analyzed smaller subgroups with different genetic signatures. Detailed results from the Sophia trial will be presented during an oral session at the SABCS meeting.

Merus and Zymeworks: Additional treatments in the pipeline

Merus created MCLA-128, a bispecific antibody that binds to HER2 as well as HER3; this dual mechanism will allow MCLA-128 to overcome resistance to cancers that develop in response to other HER2 treatments. Merus is conducting a phase 2 clinical trial of MCLA-128 in patients with metastatic HER2-positive breast cancer, and a phase 1 clinical trial in patients with a specific protein fusion known to activate HER2.

Merus' stock jumped 13% Friday morning, on news that it would present data on MCLA-128 and another pipeline compound at the AACR-NCI-EORTC International Conference on Molecular Targets and Cancer Therapeutics, being held over the weekend in Boston. The presentations focus on the phase 1 trial and the ability to target cancers with the fusion protein.

Like Merus, Zymeworks seeks to fight HER2-positive cancers with a bispecific antibody named ZW25, which binds to two distinct areas on that receptor. The company believes this approach increases the drug's ability to enter and destroy the cancer cell. Currently ZW25 is in a phase 2 clinical trial in HER2-expressing cancers.

Zymeworks did not stop there. Piggybacking on ZW25 and its ability to enter cancer cells, Zymeworks created ZW49, which attaches highly potent anticancer warheads to the original ZW25. This antibody-drug conjugate can potentially kill HER2-positive cancer cells more effectively. ZW49 is in a phase 1 clinical trial, so it will take time before its cancer-fighting ability is known.

Zymeworks' stock has risen 20% since a data presentation on SW25 in late September at the European Society for Medical Oncology's annual meeting; year to date, shareholders have doubled their money. With half its shares in the hands of institutions, Zymeworks appears to be a consistent gainer, but it needs to show some meaningful midstage trial results.

Breast cancer patients with the aggressive HER2-positive form need better treatment options. It appears that Seattle Genetics' tucatinib will provide one next year, if approved; importantly, it appears to benefit patients with brain metastases.

As for MacroGenics, investors may want to hold off until margetuximab's full overall survival data are known in 2020. Finally, Merus and Zymeworks look interesting for those willing to take riskier, long-term bets.