Altria (NYSE:MO) saw 28% of its stock price go up in smoke from late March through early October of this year. Most of the drop can be attributed to regulatory and tax attacks on the vaping and electronic cigarette industry around the globe. Altria owns a 35% share of Juul, an e-cigarette company that makes a popular smoking-alternative product. But despite this major setback, Altria looks set to rise from the ashes by handling the U.S. rollout of a new smoking-alternative device from Philip Morris (NYSE:PM). Here's what investors and those looking to invest should know.

A refresher on where Altria is

Altria made a $12.8 billion investment in Juul in December 2018. What may have looked like a fruitful investment quickly turned sour as the vaping industry came under attack due to unexplained illnesses linked to its products.

A recent announcement from the Centers for Disease Control and Prevention (CDC) stated that as of Oct. 15, there had been almost 1,500 cases of lung injury associated with e-cigarettes or vaping and 33 confirmed deaths in the United States and one U.S. territory. I'll state the obvious: It's bad news when your product seems to be making people sick or killing them.

In response, many U.S. states and foreign countries began heavily taxing vaping products or outright banning them. The crushing developments could not have come at a more inopportune time, as Altria was looking to merge with Philip Morris. As is not surprising, Philip Morris pulled out of the merger talks in response. 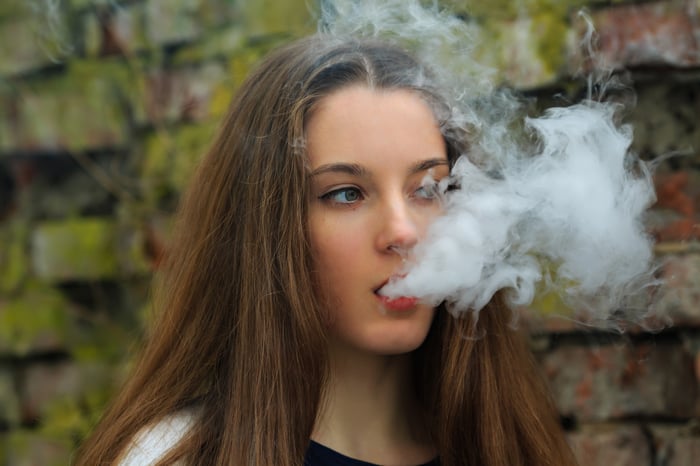 Philip Morris and Altria are still working together

While some failed mergers are like a bad breakup, with both parties going their separate ways, such is not the case here. Philip Morris chose to continue working with Altria by having the company handle the U.S. rollout of Philip Morris' new IQOS smoking-alternative device. Earlier this month, Altria launched the IQOS -- which heats tobacco -- in Atlanta through a licensing agreement with Philip Morris formed in late 2013. Under the agreement, Altria gets an exclusive license to sell certain cigarette-alternative products in the U.S. and will pay royalties to Philip Morris on sales of IQOS.

Altria will continue to open stores in Atlanta, as well as open pop-up kiosks and sell at partner locations. Users can also purchase the product online, but they will need to pick it up in stores.

The IQOS is different than vaping, but will that matter?

Let's take a look at what the IQOS is, how it is different from vaping, and what it could mean for both companies.

IQOS devices heat tobacco instead of burning it, which make them different from traditional cigarettes and vaping. Instead of heating nicotine-containing liquids to a vapor, the product heats tobacco and produces a nicotine-infused aerosol. The jury is still out on whether these products are safer than traditional smoking or vaping, or if they are a better alternative to aid in quitting cigarette use, but there are some positive studies.

A study in the Journal of the American Heart Association published earlier this year compared the effects of heat-not-burn devices, electronic vaping cigarettes, and traditional tobacco combustion cigarettes (TCs) on subjects. The study found that the acute effects of each of the devices differed on metrics including, "oxidative stress, antioxidant reserve, platelet function, cardiovascular, and satisfaction dimensions." According to these findings, traditional combustion cigarettes showed, "the most detrimental changes in clinically relevant features, thus suggesting that these modified risk products [heat-not-burn devices and electronic vaping cigarettes] may indeed prove as a useful tool to quit" traditional cigarettes. The FDA has not yet ruled on IQOS' application to be marketed as a "modified risk tobacco product."

However, back in April, the FDA gave the OK to marketing IQOS. According to the FDA's announcement, IQOS meets the definition of a cigarette outlined in federal law.  While some might interpret this to mean the IQOS device is in the clear from attacks on vaping, investors should be cautious. It's hard to predict how the regulators might react to this product in the future. Some potential insight could be drawn from how other countries and governments are reacting to the device. In late September, the government of India banned the sale of e-cigarettes in an emergency piece of legislation . Included in that ban were heat-not-burn devices like the IQOS.

However, if heat-not-burn devices are deemed safer than traditional cigarettes and vaping -- and they don't come under crushing regulation -- there could be huge upside for the companies selling them. Philip Morris would stand to gain the most as the creator of the IQOS, but Altria could ride its coattails and bum some profits through its U.S. licensing agreement. But if the product gets lumped in with vaping devices already under attack, the road ahead could be rocky.