The Dow mainstay took a dip this month, but it has everything in place to continue getting back on track.

American Express (AXP 0.12%) took a dive early in October, losing more than 5% of its price in one day and falling 27% from its August all-time high. But with forward-moving management in place, it's already on its way back up.

The downturn happened a few weeks before Amex reported its stellar third-quarter earnings. With net income of $1.8 billion up 6% from 2018, and earnings per share of $2.08, an 11% increase from the same quarter in 2018, the company is displaying its ability to aggressively expand its business in changing economies. So why did Amex fall -- and can its rebound continue?

There are several explanations for Amex's precipitous nosedive, some relevant to the company's practices and some related to outside forces. 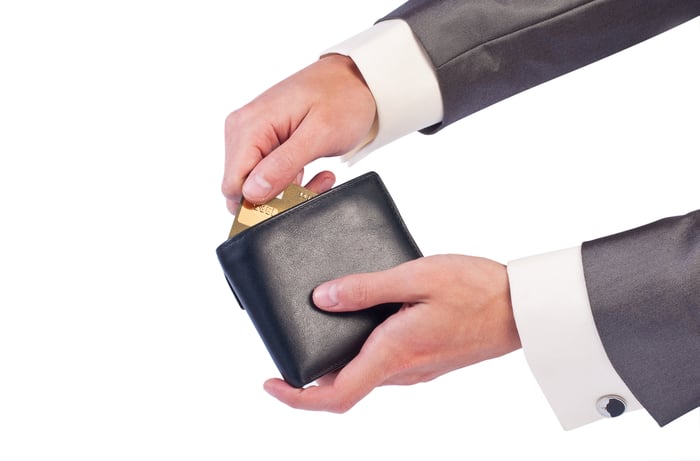 Amex is a component of the Dow Jones Industrial Average, the aggregate of blue-chip stocks that's tracked as a measure of how well the stock market is doing overall. The performance of the Dow on any particular day signifies what's going on in the market in general as opposed to what's happening with an individual stock, although an earth-shattering event in one of the companies can influence the whole.

When Amex dropped on Oct. 2, the whole Dow dropped 500 points, pushing back September gains and rattling the stock market. There were several dynamics that came together to create the downslide, including a manufacturing report that showed September to have been the worst month in 10 years for U.S. manufacturing. Then there are the overall international trade worries that are always hovering over investors, and there are also political dramas that continue to play out, with potential impeachment in the air and Brexit still waiting to make its mark.

The S&P 500 index also closed out at a low on Oct. 2 due to some of the same concerns. However, we can't blame the stock market for everything. As a leader in its field, American Express certainly has its share of competition and general industry growth that it must meet to stay at the head of the pack. Some investors may have been concerned about the financial services corporation's ability to stay relevant and innovative.

Amex has been facing new competitors that are targeting the millennial generation, a sector that it hasn't done a strong job of reaching out to in the past. Startups such as Brex and Stripe, both yet to be publicly traded, offer corporate cards for smaller start-ups, forcing Amex to reconsider this market. Corporate clients also want more bells and whistles, and with newer options available, they'll go elsewhere if they can find suppliers who meet their needs.

Just a few weeks after the Dow drop, American Express delivered its excellent third-quarter earnings report. Coming after two quarters of slowed growth, this was great news for the company and for investors.

After the report came out, Amex stock rose 2.5 percentage points, and it needs another 10 points to regain its August high.

The goods to keep going

Amex has always targeted a high-income population that spends more than the average American spender, especially on their credit cards. While this continues to drive its revenue, the company has been able to retain its hold on that market while extending its hand to lower spenders as well, bringing in newer customers bases and increasing its overall reach.

The company is now rolling out a new credit card geared toward smaller start-ups to meet competition as the industry changes. This is a market that it was neglecting but one that's continuing to gain in importance as an influential sector. Anna Mars, president of global commercial services, said to Bloomberg Media, "We acknowledge that for a younger company, with a younger set of founders, the traditional corporate program wasn't meeting their needs."

Amex is also working on several other growth strategies, including building its business to business presence and retooling its current cards to meet consumer needs. In its earnings statement, it touted a "redefinition of membership with new benefits, broader access to lifestyle experiences and more customized rewards," which helped increase fee-based products by 19% in this quarter and brought the company fees over $1 billion for the first time.

Continuing to monitor changes in the market and revamping as necessary, along with a direct niche strategy to gain customers, should keep pumping Amex along.