Please ensure Javascript is enabled for purposes of website accessibility
Log In Help Join The Motley Fool
Free Article Join Over 1 Million Premium Members And Get More In-Depth Stock Guidance and Research
By Keith Speights - Oct 27, 2019 at 8:00AM

Which stock wins in a matchup between these two giant drugmakers?

If you're looking for great dividend stocks, big pharma should be on your list. But some huge drugmakers can also provide plenty of growth over the long run, too.

Pfizer (PFE -0.68%) and Merck (MRK -0.01%) rank as two of the biggest of the big pharma stocks. Are these stocks only suited for dividend investors, or are they worthy of consideration by other investors as well? And which stock is the better pick? Here's what you need to know about how Pfizer and Merck compare on several key fronts. 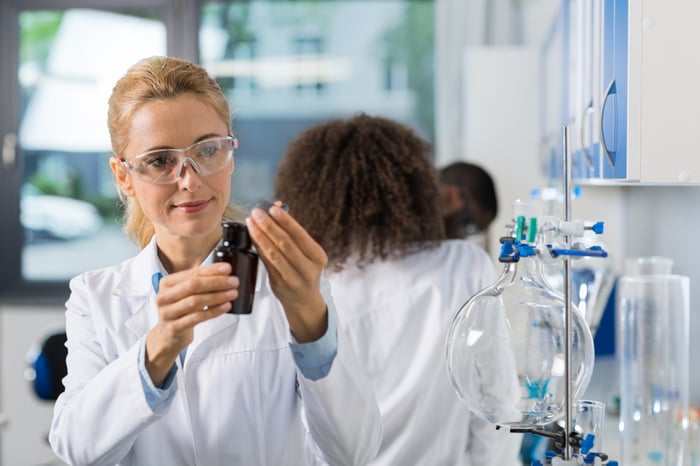 Pfizer claims at least eight drugs that are on track to be blockbusters this year. Its biggest winners include anticoagulant Eliquis, breast cancer drug Ibrance, and pneumococcal vaccine Prevnar 13. Pfizer also has rising stars with immunology drug Xeljanz and TTR amyloidosis drug Vyndaquel.Market researcher EvaluatePharma picked the latter drug as one of the biggest drug approvals in 2019.

The challenge for Pfizer is that quite a few of its biggest winners of the past are losing steam in the face of competition from generic and biosimilar versions. In particular, the loss of exclusivity for Lyrica is weighing on the company's overall revenue.

Merck, meanwhile, has seven drugs that should reach at least $1 billion in sales in 2019. The company's top-selling product by far is cancer immunotherapy Keytruda, which is projected to become the biggest-selling drug in the world within the next few years. Merck's other top drugs include its Gardasil human papillomavirus (HPV) vaccine and diabetes drug Januvia.

But Merck faces some headwinds of its own. Sales for immunology drugs Simponi and Remicade and antiviral drugs Isentress and Zepatier are falling. Cardiovascular drugs Zetia and Vytorin are also rapidly losing market share to generic rivals.

Overall, Merck has the edge over Pfizer in a comparison of the two companies' current product lineups. Pfizer's total revenue is slipping, primarily due to the negative impact of loss of exclusivity for Lyrica, while Merck's revenue continues to grow.

Pfizer's pipeline includes 101 clinical programs in development. Nine of these programs currently await regulatory approval in either the U.S. or Europe. Twenty-three of the programs are in late-stage development, with 24 programs in phase 2 clinical studies.

The company has too many pipeline candidates to discuss all of them. A couple of especially notable programs, though, are immunotherapy Bavencio, which is in late-stage testing targeting four types of cancer, and pain drug tanezumab.

The drugmaker's top current product, Keytruda, is also its top pipeline candidate. Keytruda is being evaluated in late-stage studies targeting at least a dozen additional indications. Merck also has a late-stage experimental pneumoconjugate vaccine, V114, which EvaluatePharma views as one of the most promising vaccines in development.

Pfizer probably deserves the nod in the pipeline category based on its sheer volume of programs and the diversification of its candidates across a broader range of therapeutic areas, both of which reduce the overall pipeline risk.

Comparing the dividends of these two drugmakers seems like an easy task. Pfizer's dividend yield of close to 4% is significantly higher than Merck's yield of 2.6%. With both companies in good positions to keep the dividends flowing, Pfizer seems like the slam-dunk winner.

There is one complicating factor, though: Pfizer plans to merge its Upjohn business with Mylan. This deal will reduce Pfizer's dividend. However, the resulting entity from the merger will pay a dividend. Pfizer shareholders should be in good shape, with the combined dividends of the two companies equaling Pfizer's current dividend.

Which stock appears to be more attractively valued? It depends on which valuation metric used.

Pfizer wins based on price-to-earnings multiples, both historical and forward-looking. It also beats Merck using valuation metrics based on enterprise value (EV), with a lower EV-to-EBITDA (earnings before interest, taxes, depreciation, and amortization) multiple and a lower EV-to-revenue ratio.

However, Merck claims a lower price-to-earnings-to-growth (PEG) ratio than Pfizer. This reflects Wall Street estimates that Merck will average annual earnings growth of close to 9% over the next five years, compared with 5.6% growth for Pfizer.

Merck could perform better over the next five years. But I think Pfizer is the better long-term pick, for three reasons.

First, Pfizer isn't nearly as dependent on one drug as Merck is. When Keytruda faces new and better competition, as it almost certainly will in the future, Merck could be in for a really rough time. Second, I like Pfizer's strategy to spin off its established pharmaceuticals business (Upjohn), leaving the company with newer products that should drive growth. Third, I really like Pfizer's dividend.

Pfizer probably won't be an appealing stock to growth investors, at least not in the near term. But income investors should absolutely love this stock.