A recession is coming. You know it. I know it. Wall Street knows it. But what none of us knows is exactly when the next recession will arrive.

Whenever the next economic downturn comes, though, I know the one stock that I'll for sure hold to ride out the recession: Dollar General (NYSE:DG). My view is that this discount retailer is about as recession-proof as they come. 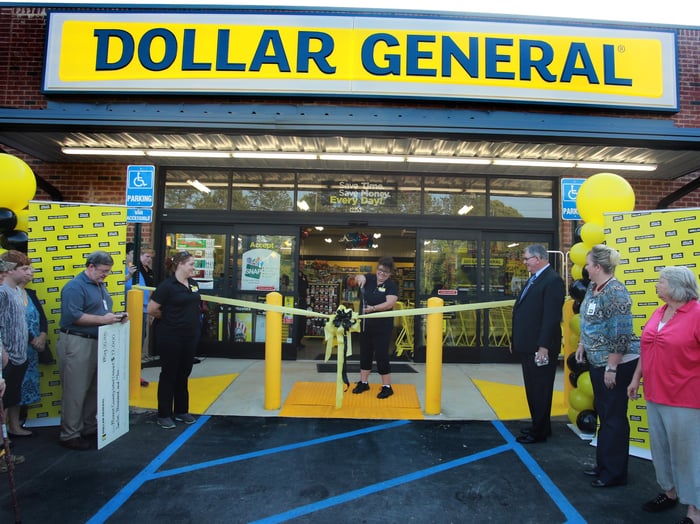 What makes a stock a great pick to own during a recession? The business needs to be one that can keep sales going and potentially even increase during a downturn. Successfully weathering previous recessions is also a big plus. Dollar General checks off both of these boxes.

The company's discount retail strategy largely insulates it during rough economic periods. During the recession of 2001, for example, Dollar General's revenue increased by a double-digit percentage. The company was taken private in 2007 and conducted another initial public offering in November 2009, however, so wasn't publicly traded during the Great Recession of 2008 and 2009.

When customers are worried about the economy, they tighten their spending. But many of the top products that Dollar General sells are consumables that customers need regardless of how well the economy is performing. And Dollar General offers discount prices that are even more attractive during tough times than during a booming economy.

Dollar General has definitely weathered several recessions. The company began operations in 1939 in Kentucky and grew steadily throughout the following decades that included plenty of ups and downs for the U.S. economy.

Not just a defensive stock

While I think that Dollar General is a solid stock to ride out a recession, it's not just a defensive stock. Actually, Dollar General has proven to be a nice growth stock. Over the last decade, shares have skyrocketed more than 600% -- over twice as much as the S&P 500 index return.

The main key to Dollar General's success has been expanding its retail footprint. In 2009, the company had 8,700 stores in 35 states. Dollar General recently opened its 16,000th store and has operations in 44 states with plans to add two more states next year.

What's especially impressive is that Dollar General has continued to open new stores faster than any other retailer. And it's doing so while some retailers are scaling back.

In addition to opening new stores, the company is refreshing existing stores to boost sales. It's also moving forward with strategic initiatives designed to increase earnings, such as DG Fresh, an effort to increase margins by shifting to self-distribution of frozen and refrigerated goods.

Dollar General delivered 8% year-over-year revenue growth in the second quarter along with 8.5% adjusted earnings-per-share growth. This beat management expectations and trounced the performances of its main dollar-store rival, Dollar Tree, and the 800-pound gorilla in the discount retail business, Walmart.

What about the threat from you-know-who?

Although Dollar General is cleaning the clocks of its primary discount retail competition, there's another company that could become a clear and present danger. In the past, Amazon.com (NASDAQ:AMZN) typically required a minimum purchase of $5 to qualify for free shipping. Now, however, the internet retail giant is waiving that requirement on many low-cost items.

Amazon has been a nightmare for many retailers, but dollar stores have flourished. The company's recent change to its free shipping program could potentially negatively impact Dollar General. I'm not worried, though.

Many of the products sold by Dollar General are consumables (like those frozen and refrigerated products with the DG Fresh program) that Amazon won't market. Also, even for products that Amazon does offer, consumers are still likely to make impulse buys at Dollar General stores in many cases rather than wait for Amazon delivery.

Regardless of what Amazon does, my view is that Dollar General will continue to deliver solid gains over the long run. Even if and when that long run includes the occasional recession.