Please ensure Javascript is enabled for purposes of website accessibility
Free Article Join Over 1 Million Premium Members And Get More In-Depth Stock Guidance and Research
By Daniel B. Kline - Oct 27, 2019 at 9:21AM

Nearly three-quarters of shoppers have made a purchase after their usual bedtime, a survey says.

Online shopping makes it not just possible, but also easy to make a purchase at any time for any reason. If you have an account with Amazon.com or any other major retailer, you may be only as far away as a search and a click from buying something.

That's great if you realize late at night that you're running low on toilet paper or need some other vital household product delivered quickly (anywhere from the next day to two days, depending upon the retailer). It's less valuable, however, when the tired, vulnerable, and maybe a little inebriated you decides that -- budget be damned -- you're getting that big-screen TV.

Examples don't have to be that extreme, but late at night is a time that shoppers are likely to make mistakes. And a lot of us are risking that mistake. In fact, 71.6% of consumers admit to buying something after their normal bedtime in the past year, and 60% said they have made an online purchase between midnight and 4 a.m., according to a survey conducted for EachNight.com, which describes itself as "an educational resource that aims to provide readers with research on a variety of sleep topics to help them sleep better." 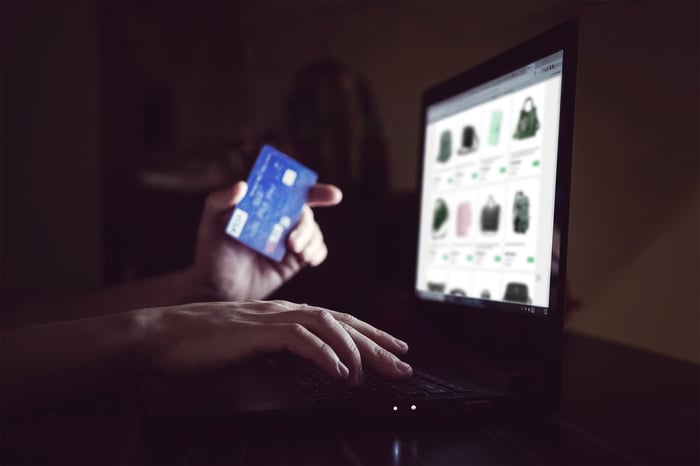 Shopping when you should be sleeping is probably a bad idea. Image source: Getty Images.

What are late-night shoppers buying?

It's possible that some people are waiting until the middle of the night to buy things they actually need. But that's generally not what's happening. The average late-night shopper is spending $165 a year on those purchases, and here's what the survey respondents said they are buying, by category:

It's unlikely that many of the people buying clothes or electronics late at night are making careful decisions. Still, only 23% of those surveyed admitted to buyer's remorse over a purchase made after their typical bedtime. That may be because 74.9% of those who bought something after they would have usually been in bed said they have tried to return a late-night purchase, with 93% saying they were successful.

Put down your phone

In some ways, shoppers could lean on the old saying, "Don't go shopping for groceries when you're hungry." If you do, you're likely to purchase more than you actually need (or think that Lucky Charms and Doritos are essentials on your shopping list).

It probably makes sense to avoid late-night purchases unless you're buying an essential. Parents, for example, who are up late with a sleepless baby may order diapers or other supplies because they notice they're running low. In most other cases, however, it's best to save the purchase until you have had a cup of coffee, given what you're buying more scrutiny, and considered whether it's within your budget.

Late night is a time of weakened inhibitions for many people, and lack of sleep can lead to bad judgment. That makes it best to put your phone away or train yourself to not visit retail websites when you're not fully clearheaded.