With the stock price drifting lower in recent months amid the trade war and macroeconomic concerns, PayPal (NASDAQ:PYPL) delivered exactly what investors were hoping for in its third-quarter report. In short, the digital payment provider continues to expand its platform of services to new users and is posting stellar growth rates for revenue and profits in the process. 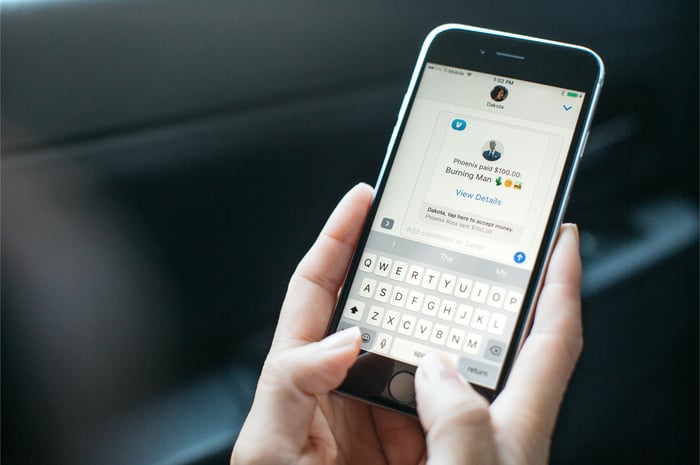 PayPal's consistency is one of its best qualities, and it's why the stock is deserving of a high valuation. The company continues to crank out double-digit growth where it counts. In the third quarter, revenue increased by 19% excluding currency changes.

On the surface, it doesn't appear adjusted earnings per share (EPS) performed very well, up only 5% year over year, coming in at $0.61 per share. However, earnings were negatively impacted by the unrealized losses of PayPal's strategic investment portfolio, which includes stakes in MercadoLibre and Uber Technologies. Excluding those losses, PayPal's adjusted EPS increased 31% year over year, reflecting the real momentum in the company's operations.

During the third-quarter conference call, CEO Dan Schulman spoke to the heart of what's driving PayPal's tremendous momentum: "Engagement continues to consistently increase, growing by 9% to almost 40 transactions per active account." On top of that, PayPal added 9.8 million net new active accounts, bringing the total to 295 million customer accounts, an increase of 16% year over year.

Users are flocking to PayPal's platform, given the brand's expanding ubiquity, now with 23 million merchants accepting PayPal. The company posted large gains in merchant services and mobile payment volume, driven by users' rapid adoption of PayPal's One Touch feature. Overall, total payment volume was up 27% year over year in the quarter, representing a slight acceleration over previous quarters.

Partnerships have been the key to PayPal's growth, and there were plenty more announcements made during the latest call. Management announced new deals with Travelers Companies, PepsiCo, Tencent's Epic Games, Citi Australia, and Lime, a global scooter rental service. These deals come as a result of PayPal's recent acquisition of Hyperwallet, which enhanced PayPal's payout capabilities for things like cash-back loyalty programs or making prize payouts for Fortnite players during competitive events.

Also, PayPal expanded its relationship with Walmart. Now, Paypal Checkout is the exclusive payment solution for Walmart's online grocery business in Mexico. PayPal also saddled up with the Japanese government in promoting cashless payments in that country.

One of the more significant developments was the approval by the People's Bank of China of PayPal's acquisition of a 70% equity interest in GoPay. This makes PayPal the first foreign payment provider to be licensed for online payment services in the Middle Kingdom. During the call, Schulman said, "This is a very significant development for us, and it has the potential to dramatically expand our total addressable market and our long-term growth prospects."

Indeed, China's online retail sales are expected to reach nearly $2 trillion this year, comprising more than half of global online retail. China has a growing middle class and more than 500 million online shoppers. PayPal can now tap into that enormous market by expanding its relationship with existing partners, including China Union Pay and Alibaba's AliExpress, as well as penetrate China's economy even more deeply via new partnerships with that nation's banks and technology companies.

PayPal is on pace to finish 2019 with revenue up 15% and adjusted EPS up between 26% and 27%, respectively. Those numbers have benefited marginally from the recent acquisitions of iZettle and Hyperwallet.

Management sees momentum carrying over to 2020, with revenue expected to improve approximately 17%, with adjusted EPS rising between 17% and 18% year over year.

These numbers clearly show why PayPal is one of the best stocks to own in the mobile payments space.