Gibraltar Industries (NASDAQ:ROCK) enjoyed a 14% jump in its stock price on Friday, Oct. 25, following the release of its third-quarter earnings report, as investors showed appreciation for a mid-single-digit advance in its top line and a double-digit pop in earnings. The small-cap manufacturer provides building products for the residential, industrial, and infrastructure industries, as well as products aimed at the renewable energy and conservation markets. Gibralter also shifted full-year earnings expectations to the top end of its previously released estimate range.

As we review results of the last three months below, note that all comparative numbers refer to those of the prior-year quarter. 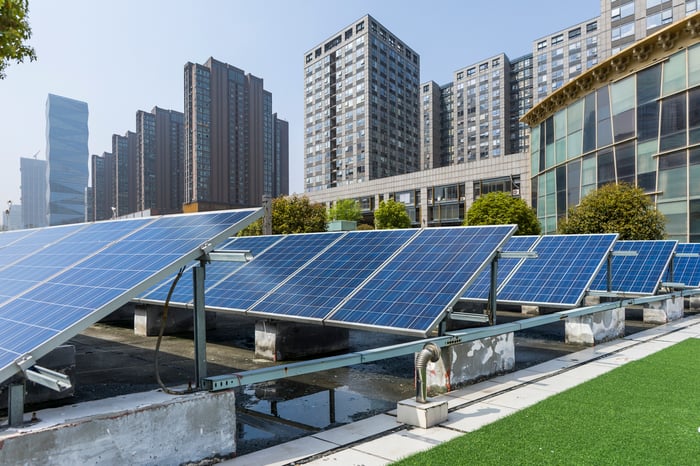 During Gibraltar's earnings conference call, executives discussed progress on a number of strategic initiatives, including the allocation of resources to the company's fast-growing renewables and conservation segment. CEO Bill Bosway observed that existing depth in the commercial greenhouses and cultivation market has been strengthened by Gibraltar's acquisition of Apeks Supercritical. Apeks is a leader in the development of technologies that utilize CO2 to provide a purer extraction of botanical oils versus existing methods.

Bosway also discussed the critical initiative of ramping up sales of new products based on the company's growing intellectual property base. In the following excerpt from the earnings call, the CEO discussed this push and how Gibraltar intends to communicate its results to shareholders:

During the quarter, our patented products represented 11.1% of our sales, that's up from 10.4% in 2018. And with the recent launch of our next generation [solar] tracker product line, [the] percent of patented product sales will reach higher levels as we move forward. As well in 2020, we're going to start measuring the percentage of sales related to new products and services, which will include our patented products. And we believe this metric will [better illustrate] the company's ability to successfully bring new solution sets to market and it also tends to correlate strongly with both growth and margin performance.

Positive changes to the earnings outlook

Gibraltar revised its 2019 earnings guidance on Friday. The company now anticipates full-year revenue to land between $1.04 billion and $1.05 billion, against a previously stated target of revenue "in excess of $1 billion." Management also lifted the bottom end of the projected net earnings range, outlining diluted earnings per share of $2.03-$2.10, versus the prior band of $1.95-$2.10. The company earned $1.96 in diluted EPS in 2018.

For the fourth quarter, Gibraltar is aiming for revenue between $251 million and $261 million, in comparison to a top line of $241 million in Q4 2018. Finally, management has pegged diluted earnings per share in the final quarter of the year at $0.48-$0.55, which will represent appreciable progress when lined up beside the $0.40 Gibraltar booked in Q4 2018.