Netflix added fewer subscribers than expected in the second quarter. That's where market makers started a 25% share price drop. However, we're talking about a forgivable slight, arguably repaired by a solid performance in the third-quarter report. Investors remained largely unimpressed, leaving Netflix shares in the bargain bin. The stock should bounce back in a hurry if and when Netflix can prove that the upcoming launches of several new and/or improved streaming video rivals aren't the end of the world.

That should be easy because it's true. A few more streaming video options will hardly kill a company that also competes against every form of other entertainment such as board games, Fortnite, a brisk stroll on the beach, or sharing a bottle of wine with your significant other.

If anything, the addition of new competitors backed by household-grade brand names only proves that Netflix is onto something with the whole video-streaming idea. By flocking to the cause, the erstwhile Netflix killers simply validate the market.

I thought Netflix was a solid buy when it was setting 52-week highs in July at more than $380 per share. The stock is trading 25% lower now, but the company hasn't done much to deserve that sharp discount. In other words, HBO is facing a tough battle here because it'll take a lot to beat Netflix's shareholder value in my eyes.

So Netflix sure looks like a great buy right now. 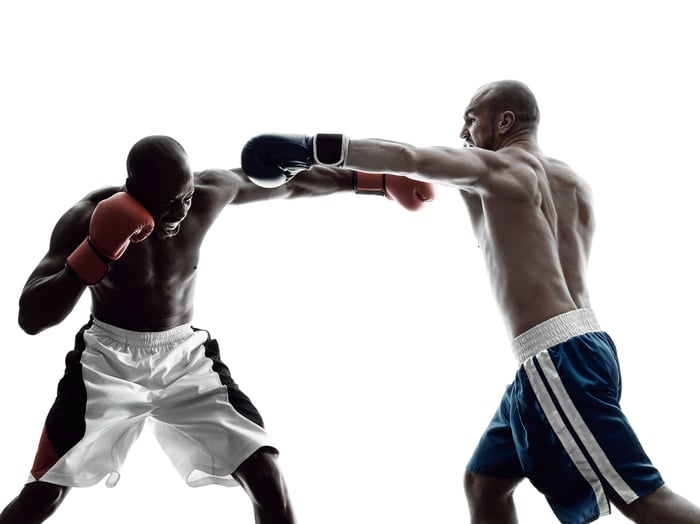 HBO has never been a stock in its own right. Started as the premium cable division of Time Warner, Home Box Office also followed the rest of Time Warner in a merger with telecom giant AT&T. That makes HBO one component of a larger media empire, which is tucked under the wing of an even more massive communications conglomerate. To muddy the waters even further, AT&T also owns satellite TV broadcaster DIRECTV.

So there's no way to actually buy HBO shares in any meaningful way, but the premium cable network does contribute to AT&T's financial results in measurable, significant, and publicly reported ways.

In this week's third-quarter report, you could see HBO revenues rising 10.6% year over year while the full WarnerMedia segment saw 4.9% lower revenues and AT&T's total sales fell by 2.4%. HBO is a standout performer in AT&T's otherwise struggling portfolio of diverse operations, hidden inside another mediocre business formerly known as Time Warner.

The HBO portion of AT&T's WarnerMedia division posted $1.82 billion of third-quarter revenues at the aforementioned 11% pace of year-over-year growth. The imminent launch of streaming media platform HBO Max should boost HBO's growth prowess in the long haul but at the cost of reducing AT&T's bottom-line earnings by roughly 5% in 2020. It's not cheap to roll out a brand-new entertainment service.

If you could break out HBO as a stand-alone ticker, it might be a respectable investment. It's hard to tell because there's no market-vetted valuation to speak of, but fast-growing media stocks with a serious online bent tend to fare reasonably well in today's stock market.

As for the whole kit and caboodle we know as AT&T, that's a tougher idea. I would recommend AT&T's stock for income investors looking for powerful dividend yields and not much else. Even then, I could point you to some stronger dividend investments at the drop of a hat.

The upshot: Easy win for Netflix

At the end of the day, I find it easy to recommend buying Netflix stock at today's prices, but it's difficult to do the same for AT&T. HBO might have a shot at winning this trophy as a stand-alone stock, but that's not a real option today.

Come back again if AT&T spins out HBO as a stand-alone business. Until then, I recommend sticking with Netflix.