Shockwave Medical (NASDAQ:SWAV) is a young start-up with fantastic growth rates. The company is quadrupling revenues from this time last year, up 339%. It has almost no debt ($17 million) and plenty of cash ($125 million). Yes, it's unprofitable, with a startlingly bad profit margin of negative 173%. But that's OK. It's early in the story, and the company should be pursuing revenue growth.

It's a good idea to use a Rule of 40 analysis to keep from getting too excited about how fast a company is growing. To apply the Rule of 40, you add revenue growth to the profit margin. Any result over 40 is great. The venture capitalists who invented this rule apply it to software as a service (SaaS) start-ups. But you can apply it to any fast-growing company because the underlying issues are the same.

Adding the positive revenue growth to the negative profit margin, Shockwave Medical has a Rule of 40 number of 166, which is an outstanding number, four times higher than the ordinary standard for excellence. So what does this company do? 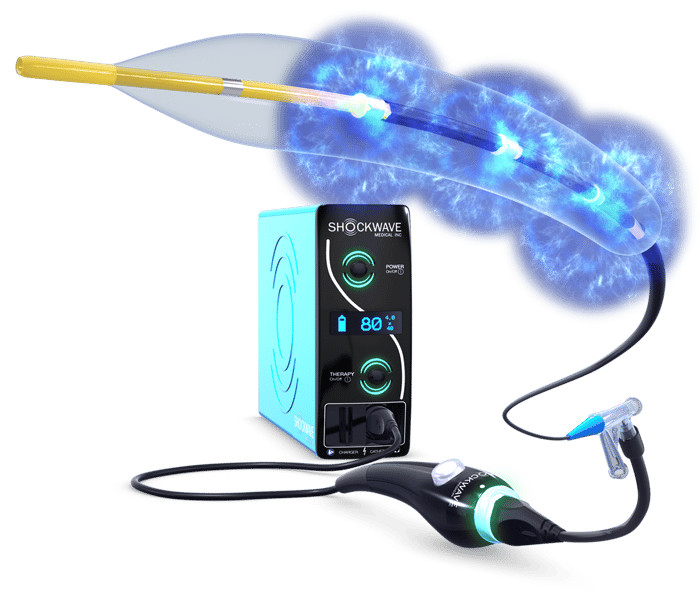 Shockwave Medical has discovered a new and safer way to destroy calcium deposits in your arteries. For years, doctors have used a surgery known as angioplasty to clear your arteries of blockages. However, this procedure is quite difficult when the blockage has calcified, or hardened. Attempts to cut through the blockage can damage surrounding tissue, and can send the calcified deposits into the patient's bloodstream, which has an array of potential bad outcomes for the patient.

What if doctors use sound waves instead? Medical science has been using this method for years to destroy kidney stones. Shockwave Medical had the brilliant idea to use this technique as a part of heart surgery. It figured out a way to miniaturize the device so that it would fit inside an artery. Using this Shockwave Intravascular Lithotripsy (IVL) technique, doctors can blow up the calcium deposits, without any damage to surrounding tissue.

Why should investors stay on the sidelines?

Those are tiny revenues for a company valued at almost $1 billion in market cap ($933 million, to be exact). The market is giving the company a very high multiple. And the stock is actually at a discount to where it was priced earlier this year. Shockwave had its IPO in March, at $24 a share. The price almost tripled in three months, to $68 a share. And then the stock crashed, losing 50% of its value.

What caused the slide? There was no actual bad news driving the stock price down. It appears to be a case of Mr. Market shrinking the multiple it wants to pay for high-priced growth stocks. And while the stock is a lot cheaper now than it was back in June, it still has an extremely high price-to-sales ratio of 36.

While high multiples and wild price swings are quite common in growth stocks, what's more alarming is that the company's total addressable market (TAM) is not very big. Shockwave Medical hopes to compete in three markets: peripheral artery disease (PAD), coronary artery disease (CAD), and aortic stenosis. The U.S. Food Drug Administration has only cleared the device for the first indication, PAD, which is a $1.7 billion market worldwide.

A market cap of almost $1 billion suggests that the market believes that Shockwave Medical will dominate the PAD market. Indeed, the market has priced in a lot of this growth already. How then will Shockwave Medical exceed expectations? What are the surprises to the upside?

So that's ultimately a $7 billion market opportunity Shockwave is chasing. While that number seems quite large, it's actually on the small side. Contrast Intuitive Surgical (NASDAQ:ISRG), for instance. The upside for Intuitive Surgical is essentially unlimited. It's entirely possible that most surgeries will be done by robots in the future because robots are more precise than human surgeons. It's one of the reasons why Intuitive Surgical has returned 7,490% since its IPO. Or consider Amgen (NASDAQ:AMGN). When you invest in Amgen, you're not only investing in specific drugs on the market, but all the future drugs that Amgen will discover down the road. Amgen has returned 19,409% to its investors since the IPO.

Shockwave Medical simply does not have an unlimited upside. The company uses sonic waves to destroy calcium in the body. That's a narrow market opportunity, not a vast one. While the possibilities of short-term growth seem quite robust, the long-term story is not nearly as impressive. Investors should avoid these shares unless they get a lot cheaper.