Please ensure Javascript is enabled for purposes of website accessibility
Log In Help Join The Motley Fool
Free Article Join Over 1 Million Premium Members And Get More In-Depth Stock Guidance and Research
By Daniel B. Kline - Oct 30, 2019 at 8:35AM

The company is basically giving the smart speaker away, but there's a catch.

About half of all sales in the fast-growing category come from the entry-level Amazon Echo Dot, which generally sells for $49.99, and the Google Home Mini, which retails at $49. Amazon, it's important to remember, regularly discounts its devices, and there have been lower-priced deals on Dots and other Alexa-enabled devices frequently.

Now, however, Amazon is upping the stakes. It's giving consumers a Dot for $0.99 if they sign up for a recurring $7.99-per-month Amazon Music subscription for Prime members, or $9.99 for non-members. The only major caveat is that the offer only applies to new members of the music streaming service.

Amazon has not been specific about whether lapsed subscribers are technically eligible for the offer. In addition, the limited product page for the deal does not name a minimum period consumers must keep the music service, so in theory you could take this deal and cancel after the first month. 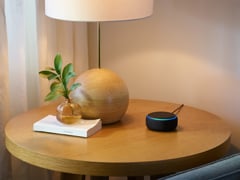 Is this a game-changer?

Amazon has been very aggressive when it comes to pricing the Dot. It has offered the device for $25 on a number of occasions, and it's likely to do so, or go even lower, for the holiday season.

The $0.99 offer will likely appeal to consumers who are already thinking of buying a smart speaker but unsure which music service to subscribe to. This deal may push those customers to Amazon, which could be a blow to Apple Music and Spotify. But it's hard to imagine that there are millions of people holding back from buying a smart speaker at all because they don't want to shell out $25, or even the $49.99 full price.

This deal, however, is smart, because it comes just before the holiday season. Parents who are considering a smart speaker/music service combination for the family may jump on this offer, and that puts more Alexa devices into people's homes at a critical time.

Amazon has a long-term plan

Shopping via smart speakers/digital assistants hasn't really taken off yet. Amazon, however, clearly believes that it someday will, making it more important to have a large base of users than it is to make money selling devices.

That has largely been the retailer's hardware strategy. It has a few higher-end tablets and Echo devices, but it mostly sells high-value, lower-cost alternatives. This has worked for Echo/Alexa devices, giving the company its big lead over Google and relegating Apple to more or less also-ran status.

Offering a basically free Echo should drive some subscribers to Amazon Music, and that might keep customers in the company's ecosystem. Playlists are generally not portable, and every music service is a little different. It's reasonable to think that once a person or family gets comfortable with one service, it's harder for rivals to win that business.

This isn't a game-changer, but it is Amazon putting more pressure on Google to lower its prices (which it has done during the holiday season in past years). These lower-end devices may become throw-ins as part of subscriptions simply because they're cheap to make in the first place, and the value brought in by the new customers should prove to be worth more than a one-time device sale.

Amazon has shown that it always puts the future first. This move will help maintain or grow smart speaker share and set the company up to leverage that audience at some point in the future.