Please ensure Javascript is enabled for purposes of website accessibility
Log In Help Join The Motley Fool
Free Article Join Over 1 Million Premium Members And Get More In-Depth Stock Guidance and Research
By Aditya Raghunath - Oct 31, 2019 at 7:10AM

Here's why investors should be paying attention to Broadcom as we head into the final months of 2019.

Value investing was made popular by financial moguls Benjamin Graham and Warren Buffett. So what exactly is value investing, and why is this trading strategy so successful?

Any stock that is trading below its intrinsic value or book value is considered a value stock. But beyond this general principle, investors must also consider the company's fundamentals, market opportunity, growth strategy, and other factors before making an investment decision.

Here, we look at one such stock that has substantial upside potential. It also has an attractive dividend yield to buck a volatile market, making it a strong pick for value investors. 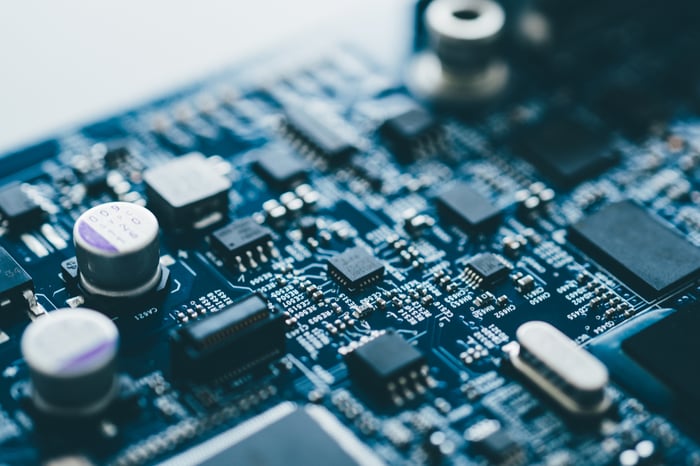 In the fiscal third quarter of 2019 (ended in August), Broadcom's networking vertical performed well due to strong demand from the switching and routing platforms. However, it's the wireless business that's expected to be a key revenue driver in the upcoming quarters, thanks to strong demand for Apple's new iPhones.

Broadcom's wireless segment provides chips for several smartphone manufacturers, including Apple and Samsung. That said, less than impressive iPhone sales have also hurt wireless revenue in the last few quarters, but Apple will also be launching a highly anticipated, 5G-enabled iPhone next year, so Broadcom can be bullish on two solid years of sales in the wireless business.

Though primarily a semiconductor heavyweight, Broadcom is now targeting high-margin software businesses for growth. It acquired CA Technologies last year for $18.9 billion, and in August 2019, it announced the acquisition of Symantec's Enterprise Security business for $10.7 billion.

During the last earnings call, Broadcom management confirmed that the integration with CA is close to completion, and the firm should start to benefit from cost synergies.

Meanwhile, the Symantec deal has helped Broadcom expand its total addressable market by $160 billion. It will also gain access to a portfolio of mission-critical security solutions for enterprises which means that the switching costs for clients will be considerably high.

Broadcom will be able to cross-sell several solutions once these acquisitions are completely integrated. These businesses will not only drive up profit margins but also help generate a stable base of recurring revenue.

In infrastructure software, Broadcom expects the renewal rate to rise by 20% for fiscal 2019 which will help the company fight an industrywide down cycle..

Are rising debt levels a concern?

Broadcom has completed seven acquisitions (Symantec acquisition is still in progress) since 2013, according to Crunchbase. These acquisitions have put a strain on the company's financials with debt now standing at a sky-high $37.6 billion.

It will likely raise more debt to fund the Symantec acquisition. However, the company has a cash balance of $5.5 billion and operating cash flow of close to $10 billion for the trailing 12-month period. In the past year, Broadcom's interest payments amounted to just under $1 billion, and the company has principal payments of $4.9 billion due by the end of 2020, which suggests its cash balance and operating cash flow are sufficient to repay interest and debt.

Broadcom's current net debt-to-EBITDA ratio stands at 3.1 times. Though high, analysts expect the company to reduce its debt load and reduce that ratio to 2.5 by the end of fiscal 2019 before falling further to 2.0 times the following year. Management will leverage high-margin segments to increase cash flows and reduce debt on the balance sheet.

Is Broadcom stock a buy?

Driven by acquisitions, the company has managed to move further away from the semiconductor industry and the volatility that accompanies the industry's cycles.

Though shares of Broadcom have outperformed the broad market year to date, the stock is trading at a relatively low forward price-to-earnings multiple of 13. Paired with annual growth estimates of 16% for the next five years, Broadcom has a price-to-earnings-growth ratio below one, which further supports its potential as a value play. The company also pays an annualized dividend of $10.60 per share, good for an attractive yield of 3.7%.

With a more diversified revenue base, low valuation, and encouraging growth metrics, Broadcom is a solid buy, not just for 2020 but for the long haul.