Bank of Hawaii (NYSE:BOH) filed its third-quarter 2019 financial scorecard on Monday, Oct. 28, and provided investors with generally stable results, which included acceleration in non-interest income versus the prior year, and a slight drag on overall profitability from increased overhead expenses. Below we'll review the quarter's highlights, and focus in on management's views on the current strength of the Hawaiian economy.

Note that all comparative numbers below are presented against those of the prior-year quarter:

Bank of Hawaii: Results at a glance 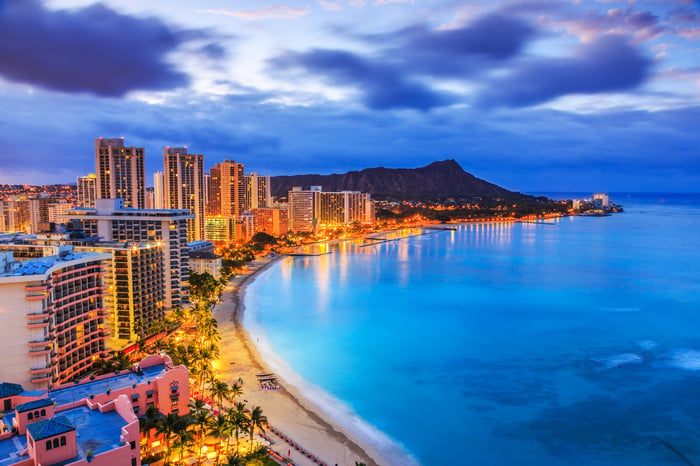 Management's thoughts on the Hawaiian economy

Investors in Hawaiian bank stocks pay particularly close attention to the condition of the state's economy, as the island is isolated from the mainland and relies so heavily on tourism and commercial real estate to fuel growth. By some estimates, tourism accounts for one-fifth of Hawaii's economy.

During the company's earnings conference call on the 28th, CEO Peter Ho observed that the local economy is fairly stable, exhibiting an unemployment rate of 2.7% in September versus the national average of 3.5%. Ho also noted that visitor arrivals have grown by 5.2% in the first eight months of 2019 versus 2018, although daily tourist spend during that period has dipped by 0.5%.

Below are Ho's comments on the island's commercial and residential real estate markets, which provide important color for investors, since commercial mortgages, residential mortgages, and home equity loans currently make up 73% of the bank's $10.9 billion loan portfolio:

Our real estate market also continued to remain active. We had particularly strong growth in single-family home sales during the third quarter, which increased by 8.7% over the same period in 2018. Year-to-date sales of single-family homes are now at comparable levels with 2018, and median sales prices remained stable.

Condominium sales however continued to soften through the third quarter. Year-to-date sales of condominiums declined 6.7% compared with the same period in 2018, and median sales prices are down 1%. Months of inventory at the end of the quarter were 3.5 months for single-family homes and 3.9 months for condominiums. The year-to-date median number of days on market was 23 days for a single-family home and 26 days for a condominium.

Despite the relative strength of the Hawaiian economy, executives relayed their impression during the earnings call that it may be late innings in the island's economic cycle. This is partly reflected in the bank's higher provision for credit losses and slightly slower pace of commercial loan growth versus past quarters. The barometer of condominium sales discussed above may also provide support for this reasoning.

However, management believes that the bank is well-positioned overall for 2020, given its high loan quality and a growing customer deposit base. Considering risk factors, shareholders also seem confident in the organization's prospects. Shares have appreciated nearly 34% year-to-date on a total return basis.