General Electric (NYSE:GE) stock has experienced extreme volatility over the past year, as investors have struggled to understand the company's chances of turning itself around. On one hand, new CEO Larry Culp has provided a steady hand and motivated his subordinates to deliver better execution. On the other hand, many parts of GE's power and renewables segments are struggling, the company continues to carry a heavy debt load, and some investors are worried about the potential for significant additional losses at GE Capital.

In recent months, the bears have been winning the debate, as GE stock has slipped far below its 52-week high of around $11. However, General Electric made solid progress on its turnaround last quarter. This caused the stock to jump 11% on Wednesday, surpassing the $10 mark for the first time in nearly three months. Even after this big gain, GE stock has plenty of upside, as long as the company doesn't face any major setbacks in 2020. 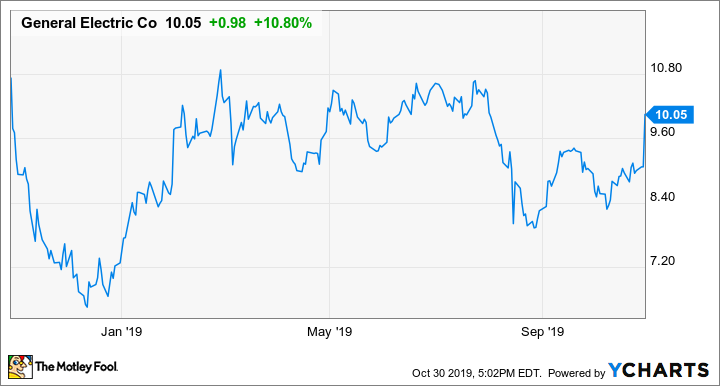 As usual, there were a lot of moving parts in General Electric's earnings report last quarter, because the company is in the midst of a major restructuring. Revenue was roughly flat year over year at $23.4 billion. Revenue for the company's industrial businesses rose 7% on an organic basis, though. Meanwhile, GE posted a loss from continuing operations of $0.15 per share but an adjusted profit of $0.15 per share. That beat the average analyst estimate of $0.11.

The $0.30 difference between earnings per share from continuing operations and adjusted EPS was driven primarily by a goodwill impairment charge, an insurance charge related to lower interest rates, and other smaller one-time items.

GE's adjusted industrial operating margin improved to 10% from 8.5% a year earlier, because of big charges recorded by the struggling power segment in Q3 2018. (GE Power reduced its operating loss by 79% year over year.) The highly profitable aviation and health segments also posted modest earnings growth last quarter, but the renewables business swung to a small loss from a small profit in the prior-year period. For the full year, General Electric is maintaining its guidance for adjusted EPS to come in between $0.55 and $0.65, despite a $0.05 headwind from giving up its majority stake in Baker Hughes in September. In addition, for the second straight quarter, GE raised its full-year free cash flow guidance by $1 billion. It now expects to produce $0 to $2 billion of industrial free cash flow in 2019.

There was a lot of news at GE last quarter. In August, serial whistleblower Harry Markopolos accused it of accounting fraud, particularly with respect to its insurance business. GE stock plunged by 11% immediately following the accusations, but experts quickly dismissed Markopolos' analysis. Indeed, on Wednesday, GE reported that the company's annual test of its insurance reserves found that the new actuarial assumptions it adopted two years ago remain valid. While the company took a $1 billion pre-tax charge related to its insurance business, that was driven by changes to the discount rate used to estimate future investment returns.

GE also continued to address its weak balance sheet during the third quarter. Most notably, it sold the rest of its shares in Wabtec and sold another substantial portion of its stake in Baker Hughes. This enabled it to reduce its gross borrowings to $93.2 billion as of the end of last quarter, down from $105.8 billion a quarter earlier.

Finally, General Electric announced several changes to its pension and other retirement programs in early October. Most notably, it will freeze the pension benefits of 20,000 current salaried employees at the end of 2020. Those employees will keep the benefits they have already earned but will receive 401(k) plan contributions rather than accruing additional pension benefits in the future. This move and several other adjustments will largely offset the impact of this year's decline in interest rates, which would have caused GE's pension deficit to spike higher.

Plenty of room for improvement

General Electric has made a lot of progress in fixing its problems over the past year. It has also lined up several major asset sales, which will enable it to significantly reduce its debt again in 2020, reducing the inherent risk of GE stock.

Nevertheless, Culp and his leadership team recognize that the company still has a lot of work ahead of it. While Culp expects results to improve next year, GE will still be working through restructuring costs and various legacy issues. It will take until at least 2021 for GE to really hit its stride.

However, if GE can get its weaker business units back to sustainable profitability by then (or soon thereafter), it would be great news for shareholders. The company's largest and most profitable business, GE Aviation, has ample room for revenue and profit growth in the years ahead, driven by a growing military business and rising services revenue from its expanding installed base of commercial jet engines. Without the rest of the company holding it back, the aviation segment's strong growth should drive big gains for GE stock.