Please ensure Javascript is enabled for purposes of website accessibility
Log In Help Join The Motley Fool
Free Article Join Over 1 Million Premium Members And Get More In-Depth Stock Guidance and Research
By Billy Duberstein - Oct 31, 2019 at 6:46AM

Elon Musk and company continue to work their magic.

The automobile business is a very high fixed-cost business, which means that much of an auto manufacturer's costs come from its plant and equipment, which have to be maintained and updated. There are also high-wage technical personnel, who are often under union contracts. Therefore, when an auto company has high sales, much of that excess revenue falls straight to the bottom line. Yet when sales decrease, the opposite is true, and margins compress.

Tesla (TSLA 0.05%), however, managed to defy this automotive law of nature last quarter. In its recently reported third-quarter results, Tesla somehow managed to increase margins significantly, even as automotive and total revenue decreased. It's one of many mini-miracles the company has pulled off since Tesla, in 2003, became the first new U.S. automaker since 1956. Here's how the company did it. 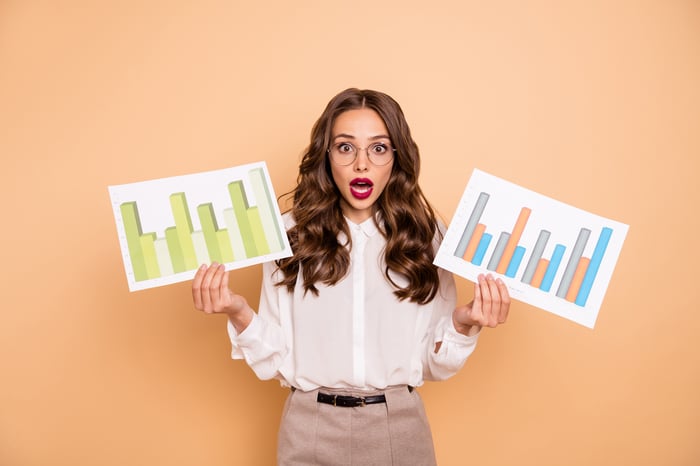 Here are Tesla's results at both the automotive and company level, as it moved from the second to the third quarter:

As you can see, though Tesla's revenue went down, margins increased... by a lot. The magnitude of the margin increase is the result of great management on not one but several fronts.

First and perhaps most importantly, while Tesla sold fewer cars in Q3, it sold more Model 3 vehicles, its most important product. The Model 3 is a mass-production vehicle, so it benefits from higher volumes on top of its fixed-cost base. In Q3, Tesla sold 79,703 Model 3s, compared with 77,634 in the prior quarter.

Although Tesla actually lowered Model 3 prices, it pushed customers into more-expensive models since it lowered the price of the higher-priced longer-range vehicles even more than the lower-end standard range. This enabled the average selling price (ASP) of the Model 3 to remain flat in North America -- though ASPs for the Model 3 were lower in the Asia and EMEA (Europe, Middle East, and Africa) regions. Still, a higher volume -- along with Tesla's ability to lower input costs through higher-volume ordering -- allowed a very impressive margin expansion, even for the low-end Model 3.

Though the company sold 239 fewer Model S and Model X vehicles in Q3, it did so at a higher ASP. In the second quarter, Tesla took various pricing actions on these vehicles, including heavy discounts for models produced before a new drivetrain and suspension were added in April. That had the effect of greatly decreasing ASPs in the prior quarter. Tesla also did away with Model S and X standard versions and lowered the price of more expensive, longer-range versions, which also had a positive effect on the overall S and X mix.

Though some investors maybe have been spooked when Tesla cut prices earlier this year, the strategy appears to have worked, by stoking demand and pushing customers into higher-end, longer-range models. The mix shift enabled by the pricing actions last quarter, along with Tesla's overall increased focus on cost-cutting and efficiency, allowed automotive gross margins to expand almost 4 percentage points.

In addition to the above production efficiencies, Tesla was also able to benefit from the introduction of its Smart Summon feature that it released during the quarter. Smart Summon allows owners to "summon" their Tesla to self-drive in a parking lot at low speed to pick them up.

Tesla has done a rather ingenious thing in the recent past -- offering various self-driving features to buyers before they were introduced, with the promise that these features will get more expensive over time. As such, Tesla has racked up about $500 million of deferred revenue that it has yet to recognize -- but it will as self-driving features are introduced through software updates. In the third quarter, Tesla was able to recognize $30 million that it had previously collected as cash as it introduced Smart Summon.

On top of these two important items, Tesla was also able to squeeze even more expenses out of its business. In its solar business, management noted increased efficiency as it can now install residential solar in a single visit, whereas it took about three total visits prior. Tesla was also able to cut costs around its service vehicles, as well as overall selling, general, and administrative expenses.

This general cost-cutting mindset allowed Tesla to not just lower operating expenses relative to sales, but even in total dollars, as operating expenses fell from $1.09 billion to just $930 million in the quarter. Though $117 million of the $188 million decrease was due to a non-recurrence of restructuring expenses taken in the second quarter, overall sales and marketing expense still declined by $51 million outside of this.

Finally, Tesla also got a slight benefit from foreign exchange, which sometimes works against it, but sometimes for it, as it did in this quarter. Tesla doesn't hedge its foreign-exchange exposure.

Blowing up the bears

The main argument for Tesla bears and short-sellers was that the company would never make money selling cars, and the company appeared to defy that thesis this quarter. Tesla has said that 2019 would be a year in which the company focused on cost-cutting, in preparation for its next stage of growth, fueled by the Model Y launch next year.

Even bears should be impressed -- and likely surprised -- by how much fat Elon Musk and his team have cut out of Tesla's operating structure. In the outlook in its Q3 report, Tesla said it expects, "Positive GAAP [generally accepted accounting principles] net income going forward, with possible temporary exceptions, particularly around the launch and ramp [up] of new products."

There's still a valuation argument to be made against Tesla, but if the company can sustain GAAP profitability every quarter going forward, then a lot of reasons to short the stock are out the window. As such, it's no surprise to see Tesla's stock skyrocket on this news -- even if it did bring in slightly lower revenue.