There was a lot of good news nestled into Hanesbrands' (NYSE:HBI) third-quarter report: Revenue beat expectations, Champion sales soared, and the full-year guidance was raised. But there was a significant piece of bad news as well: The core innerwear business struggled, hit by a soft back-to-school retail environment.

When the market opened on Thursday, the stock was down around 10% as investors focused on what went wrong.

Even with the innerwear business facing headwinds, Hanesbrands managed to grow its revenue and earnings in the third quarter.

The international segment, which contains both innerwear and activewear sold in international markets, was the only major segment to post growth. International sales rose 10.9% to $663.5 million, enough to offset weakness in the other two segments.

Domestic innerwear sales were down 3.5% to $578.5 million, while segment operating income was down 8%. Sales were below the company's own expectations, with innerwear replenishment negatively affected by a weak back-to-school retail environment and previous retailer bankruptcies. Within the innerwear segment, sales of intimates met the company's expectations, driven by shapewear sales rising for the fifth consecutive quarter. 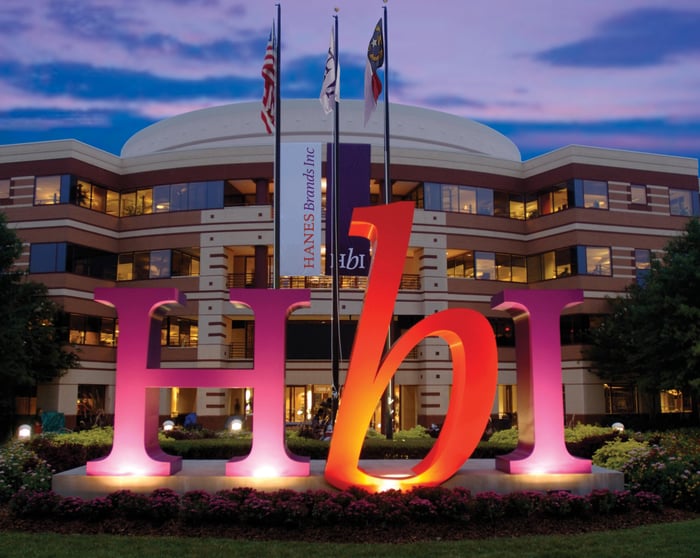 The domestic activewear segment also suffered a sales decline, with revenue down 1% year over year. This segment includes the Champion brand as well as other activewear products. Global Champion sales were up 26% in the third quarter, with strong growth in both the U.S. and international markets. The activewear sales decline was driven by the company's shift away from commodity products in the mass channel, as well as weaker demand in the printwear channel.

While Hanesbrands' gross margin was down slightly in the third quarter, a decrease in operating costs and interest expense drove the bottom line higher. The company's net debt was reduced by $470 million year over year.

Guidance gets a boost

Despite the innerwear struggles, Hanesbrands raised the low end of its guidance ranges for 2019:

One thing the company doesn't have to worry about is the trade war between the U.S. and China. From Hanesbrands' FAQ:

Unlike the vast majority of the apparel industry, our exposure to China is minimal. We do not own any manufacturing operations in China. Of our third‐party sourced units for the U.S. market, China represents less than 3% of our U.S. costs.

Hanesbrands will face one significant headwind in 2020: the end of its contract with Target for its C9 activewear products. The company expects C9 to generate $355 million of revenue in 2019, a meaningful portion of its total revenue for the year. The good news is that Hanesbrands expects the Champion brand to continue to produce double-digit growth in the years ahead, eventually offsetting the loss of the C9 business.

While Hanesbrands is certainly facing some challenges, the third-quarter report doesn't change the long-term story for investors.