Please ensure Javascript is enabled for purposes of website accessibility
Log In Help Join The Motley Fool
Free Article Join Over 1 Million Premium Members And Get More In-Depth Stock Guidance and Research
By Asit Sharma - Updated Nov 1, 2019 at 9:45AM

In the staid and low-key world of community bank stocks, earnings-related sell-offs tend to be understated. Thus, New York Community Bancorp's (NYCB 0.39%) 13.5% share price haircut on Wednesday was notable for the intensity of investors' reaction to the bank's third-quarter results.

First, total loans declined to $40.8 billion against $40 billion at the end of the third quarter of 2018. This modest shrinkage isn't a concern in and of itself. However, in the company's earnings press release, management stated that "[A] number of multifamily loans refinanced away from the Bank because other alternative lenders were willing to provide more credit than we were, which was inconsistent with our rigorous underwriting standards."

Second, the company noted that during the third quarter, several of its competitors reentered the deposits market with a willingness to pay "irrational interest rates" on the deposit products held by large institutions. The bank decided not to compete with these entrants, and allowed its deposit relationships with some large institutions to expire, in favor of growing its smaller-customer, retail deposit base, which represents a cheaper funding source for its loans. 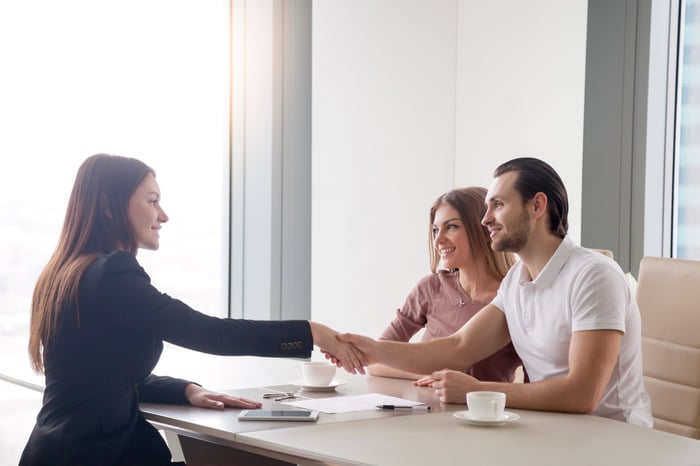 Be wary of loan portfolio vulnerability

While the color provided by management on its loans and deposits spooked investors palpably just a day before Halloween, the deposits issue really shouldn't be of great concern.

As management pointed out, New York Community Bancorp's interest-bearing checking and money market accounts declined by $1.6 billion against the prior-year quarter due to its refusal to compete for business via unsustainable interest rates. Yet total deposits have increased year over year by $1.3 billion, to $31.6 billion. A subset of this asset group, certificates of deposits, has seen 25% year-over-year expansion to $14 billion, more than compensating for the loss of the institutional deposits.

The bank's competition for multifamily loans is more worrisome, however. While New York Community Bancorp is the holding company of a community bank with nearly 240 branches spread across New York, New Jersey, Ohio, Florida, and Arizona, its primary source of loan income derives from multifamily loans in New York City, which are focused on the rent-controlled building market.

In fact, of the bank's nearly $41 billion loan tally, 76% of lending resides in multifamily commercial mortgage loans. This concentration is a bit atypical of most community banks' loan portfolios, which normally sport more diversity, including significant representation in residential mortgage loans and home equity lines of credit.

Thus, investors are likely correct to fret over possible erosion in the bank's biggest bet, its multifamily loan base. New York Community Bancorp already operates with suboptimal profitability. The company's net interest margin (NIM) of approximately 2% is below the 3% baseline that's considered a normal profitability level for banking entities. And its NIM is well below that of some fellow New York State-based community banks, such as the 3.73% mark that Community Bank System just posted in its own earnings report last week.

A further decline in New York Community Bancorp's multifamily loan portfolio due to alternative, non-bank funding competition will pressure its NIM and, as a consequence, weaken net income. And while it's tempting to step in and purchase shares today, since the company's already handsome dividend yield of 5% has ratcheted up to a near-6% yield after the stock's sell-off, bank investors should probably exercise some patience.

Waiting a quarter or two to see if competition from alternative lenders is an anomaly or a trend could mean the difference between picking up shares at a discount or getting stuck with further share losses. New York Community Bancorp's profit concentration in multifamily loans has proved a strength in the past, but for the present, it represents a tangible near-term risk for shareholders.