Halloween wasn't so frightening for investors in a struggling food giant and in a media company with a strong position on its market.

Boo! This Halloween had its scary aspects for investors, with many top stocks swooning on Thursday as if they were decaying zombies. There were, as ever, exceptions; we had a host of companies floating above the fray.

Two of these were businesses that make their shareholders happy by treating them to good news. Let's ring the doorbell and see what kind of candy they handed out. 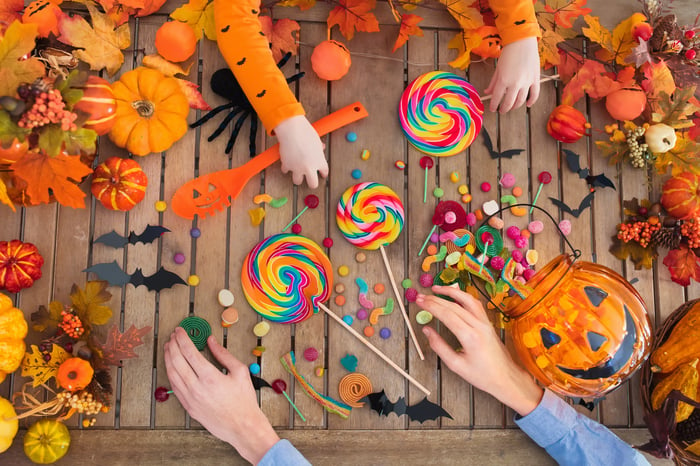 Like a vampire rudely awakened from a 100-year nap, the stock of troubled condiments purveyor Kraft Heinz ( KHC 1.87% ) rose sharply and swiftly on Thursday.

The company's Q3 of fiscal 2019 results weren't all that much to write home about, frankly, but at least profitability was better than expected. Net sales fell by almost 5% on a year-over-year basis to $6.08 billion, not quite hitting the $6.12 billion mark estimated by analysts.

Under GAAP standards, net profit saw a hefty 45% rise to $899 million. The asterisk next to this number is that one-off items, mainly a sale of Kraft's Canadian natural cheese business, pumped it up. On a non-GAAP (adjusted) per-share basis, Kraft Heinz said, its net earnings actually fell 9% to $0.69 -- still, this is well above the average analyst estimate of $0.53.

Kraft Heinz investors are hungry for any scrap of good news from the company, and a convincing earnings beat is a nice, sweet morsel. But we're working from a low base here -- with several bad quarters in Kraft's recent past, the company's share price had lost one-third of its value year to date before the Q3 figures shot it 13% higher on Thursday.

Although Kraft Heinz is behind some of the most popular and durable food and condiment brands in your local supermarket, its lineup feels tired. Other companies are successfully attacking trends, like the long-tail consumer shift toward healthy eating or the imitation-meat fad headed by the likes of Impossible Foods and Beyond Meat.

As ubiquitous as its products might be, Kraft Heinz is clearly not inspiring the consumer -- that slipping revenue figure is very revealing. Although the stock is cheap due to its long-running disfavor with the market, I think it's a bargain for a reason, and I wouldn't be a buyer.

Also reporting its latest figures on Spooky Day was satellite radio king Sirius XM Holdings ( SIRI 1.77% ). These were good enough to provide a nearly 4% lift to the stock on the day.

The very good news is that the company posted convincing growth in its Q3 of fiscal 2019, even when certain mitigating factors are removed. Revenue was up by 7% over the same period last year, hitting $2.01 billion.

This was on the back of a roughly 302,000 rise in the count for self-pay subscribers (defined as those not utilizing a subsidized promotion), to a total of 29.6 million. This is a key operating metric for a company that depends heavily on paid subscriptions. Splashy 2018 acquisition Pandora also saw a rise in same, by around 33,000 to land at almost 6.3 million.

So the company performed more or less around expectations. What probably gave investors more of a sugar rush was the raised guidance. For full-year 2019, Sirius XM now expects revenue of $7.85 billion, with adjusted EBITDA of $2.4 billion (2018 result: $2.24 billion). It also reiterated its forecast for self-pay net subscriber "adds" of 1 million.

SiriusXM has been around for many years, and it occupies an enviable niche as the satellite radio company on the market. Dominance has its privileges, but even considering this, the company is doing a good job hustling for new subscribers. An appealing range of programming and creative forays into events and limited-time specials help support this.

In other words, the company leverages its very strong position well, and isn't lazy about making money. I'm a subscriber myself, and I feel that I more than get my dollar's worth. All in all, then, I think this stock is still a winner even after that earnings-fueled price bump.