Plant-based meat company Beyond Meat (BYND -3.96%) reported its first profitable quarter as sales soared by triple digits once again. Although its gains were driven by expanding restaurant partnerships, the results show the company is also increasingly getting its patties into retail outlets, too.

As restaurant and food service segment growth moderates -- and it's difficult to qualify sales that quadrupled in size as "moderating" -- it's the retail segment that is beginning to pull away and may become the more important component of Beyond Meat's business. 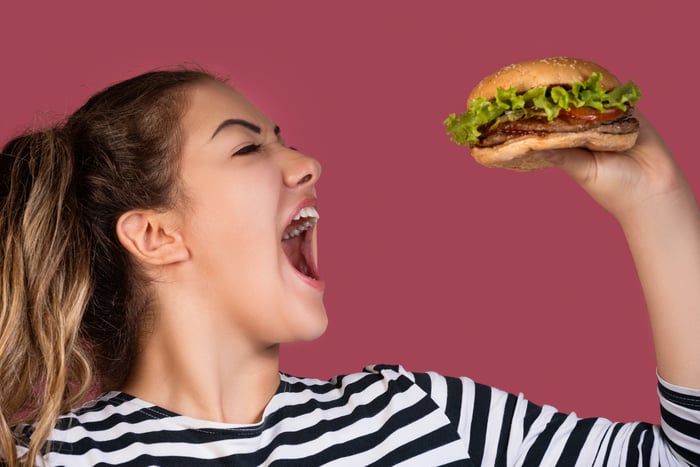 Getting Beyond Meat's patties into Dunkin' Brands donut shops or having its burgers tested in McDonald's generates a lot of headlines, and sales to those establishments surged 312% from the year-ago period to $41.5 million. That, however, was a good notch below the 483% gain the segment saw just one quarter ago, hence the "moderating" adjective, even though it's obviously still a huge expansion.

Retail sales have always accounted for a greater portion of revenue than restaurants, last year representing 58% of the total. But that figure has fallen to 52% in 2019 so far as retail sales rose 212% to $50.5 million last quarter. That was the strongest quarter of growth this year but still not enough to keep up with restaurants. The gap between the two channels may be shrinking, but as you can see below, their growth rates are moving in opposite directions as well, meaning restaurant sales are likely to remain the smaller segment long term.

That suggests that as important as the restaurant deals are to Beyond Meat today, serving as a gateway for consumers to test what a plant-based burger tastes like for the first time, it's increased availability overall that will be most important to the company's future. The supermarket and grocery store channel will continue to play an outsized role in making this business sustainable.

A wave of rivals about to crash onshore

The biggest problem is the amount of competition coming onto the market and the high quality of those competing products. Beyond Meat and its peer, Impossible Foods, still enjoy first-mover status at the moment. But with protein processors like Tyson Foods entering the fray and Nestle offering a complete faux bacon cheeseburger, along with retailers such as Walmart selling its own private-label versions, we may see something similar to what happened to the meal kit business.

There, Blue Apron had a clear first-mover status as the leading home delivery meal kit company, but because there were low barriers to entry, the market soon became crowded. When the likes of Walmart began carrying its own Great Value branded meal kits, the product had become largely commoditized. It was impossible for Blue Apron to charge a premium for its product, and the business has spiraled down ever since.

Beyond Meat potentially faces a similar fate. Its burgers carry a premium now, which helped it report adjusted EBITDA of $11.0 million compared to a $5.7 million loss a year ago, but the great influx of competition will blunt its ability to continue doing so.

The leader in plant-based meat alternatives had a strong third quarter, but the company will have to overcome quite a few challenges in the years ahead, requiring investors to check their expectations given the stock's jaw-dropping run in just a few months on the market.