When I initially looked at the third-quarter results Carter's (NYSE:CRI) announced late last week, I raised my eyebrows at the combination of modest revenue growth and a steep decline in profitability. That is, until I realized the GAAP results  for the kid's clothing retailer included the impact of an impairment charge triggered by the relative underperformance of its once-promising Skip Hop subsidiary.

Even so, the strength of Carter's namesake brand helped prop up the company as a whole, leading investors to drive shares around 3% higher in the wake of the earnings release. 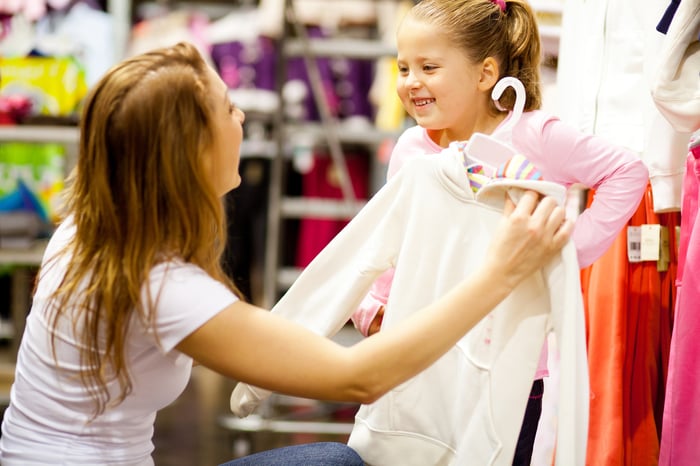 Now that the dust has settled, let's take a closer look at what Carter's accomplished as it kicked off the second half.

As I noted above, those earnings figures include a non-cash, after-tax charge of $23.7 million, or $0.53 per share related to Carter's writedown of the Skip Hop tradename. Adjusted for one-time items, Carter's non-GAAP net income increased 11.5% year over year to $83.9 million, and -- with the help of stock repurchases over the past year -- rose 16.2% on a per-share basis to $1.87.

For perspective, the guidance Carter's provided in July called for more modest 1% revenue growth, and a 3% to 4% increase in adjusted earnings per share. As such, most analysts were modeling lower adjusted earnings of $1.69 per share on revenue closer to $936 million.

Since acquiring Skip Hop in 2017, we have grown its annual sales by over 50%. It's a terrific brand providing essential core products, serving the needs of families with young children. We're glad we bought it, it's supported by a wonderfully talented, creative and innovative team. The profit contribution from Skip Hop has not met our expectations. We expected by its second full year, it would be earning about $15 million a year, but earned less than $5 million this year. Last year, Skip Hop lost its largest customer when Toys "R" Us closed.

International demand for the brand is lower than we had expected, and its product costs increased due to new China-related tariffs. We also invested significantly in Skip Hop's talent, technology and distribution capabilities needed to grow the business. The lack of progress improving Skip Hop's profitability triggered the impairment charge.

Still, Casey insisted that Carter's anticipates Skip Hop's sales and profitability will keep growing in the coming years -- albeit at a slower pace relative to management's initial expectations at the time of its acquisition.

But Carter's can count on its core business in the meantime. Wholesale segment sales grew 3.9% year over year to $352.3 million, helped by strong demand for exclusive Carter's brands. And U.S. retail sales climbed 1.1% to $464.1 million, as new locations more than offset a modest 0.6% decline in comparable-store sales. Meanwhile, international segment sales rose a slight 0.9% to $127 million, as growth in most regions was partly offset by the transition of Carter's business model in China to a licensing arrangement with a China-based children's apparel retailer and wholesaler.

Excluding the impairment charge, we exceeded our sales and earnings growth objectives in the third quarter. Our growth was driven by our wholesale and retail businesses, and reflects good demand for our fall and holiday product offerings. With fall-like weather arriving in more parts of the United States, we believe we are on track to achieve our 31st consecutive year of sales growth.

To that end, Carter's sees net sales and adjusted earnings per share growing roughly 1% year over year in the fourth quarter. So, for all of fiscal 2019, Carter's narrowed its outlook to call for net sales growth of 1.5% (right at the midpoint of its previous 1% to 2% guidance range), while adjusted earnings are now expected to climb 4% (near the bottom of its prior 4% to 6% targeted range) from $6.29 per share last fiscal year.

The market has a history of forgiving Carter's for its typically conservative forward guidance -- likely a consequence of its steady habit of beating expectations each quarter.

With shares trading roughly on par with where they were a year ago -- but also up more than 30% from its 52-week low set last December -- that could explain why Carter's stock appears to have resumed its long-term upward path. If Carter's is able to effectively re-accelerate growth and effectively reset expectations for its Skip Hop acquisition, I suspect the stock will only continue climbing from here.