Nordstrom (NYSE:JWN) stock has declined over 40% in the past year, as investors turned away from weak sales and headwinds across the department store sector. Revenue in the first half of the retailer's fiscal 2019 decreased 4.1% year over year to $7.3 billion. The bulk of that shortfall came from Nordstrom's full-price sales, which fell 5.9% in the same period.

After three straight quarters of declining revenue, investors are hoping to see improvements in the near future, potentially driven by management's marketing efforts and smart product assortments. On Oct. 24, Nordstrom opened its largest flagship store in New York City, a key piece of its new strategy to drive traffic and attract customers. Will these fresh efforts be enough to reverse the stock's slide? 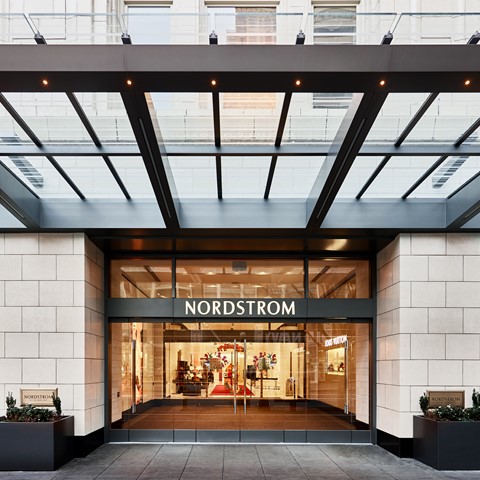 The new store occupies a massive footprint of 320,000 square feet, and this seven-level retail space is the single largest investment in Nordstrom's history. With this grand opening, Nordstrom plans to capture over $700 million in sales in the New York market over time and boost slowing growth in its full-line business, which includes Nordstrom locations and the Nordstrom.com e-commerce business.

Nordstrom's New York flagship is differentiated with its extensive amenities, pop-ups, and exclusive collaborations. Visitors can choose from seven different places to eat and drink, plus a wide selection of service offerings, including a beauty area that offers facials, massages, and botox treatments. Appealing to the growing popularity of niche retail, the store features pop-ups for brands like Everlane and exclusive collaborations with designers such as Christian Louboutin.

The company is also strategically pairing flagship stores with its smaller Nordstrom Local stores in the same area. The latter locations offer convenience and accessibility with services that include tailors, stylists, dry cleaning, and order pick-up. This two-prong store strategy is rolling out to Nordstrom's top 10 markets by the end of next year.

The Local "service stations" are an important part of the company's omnichannel strategy, boosting sales from buy online, pick up in store orders. Online sales made up 30% of Nordstrom's top line in the most recent quarter and enjoyed an 18% jump during the last holiday season. In Los Angeles, where the local market strategy was first rolled out, management is already seeing "higher engagement and spend" at Nordstrom Local stores with customers spending 2.5 times more on average .

Will the plan work to drive a turnaround in sales?

Nordstrom has a solid track record as an innovator among department stores with its early move into off-price and online channels. Management is betting that its local market strategy and focus on its top 10 markets, which account for 60% of sales, will succeed in driving growth going forward. Results have been promising thus far, but investors will need to show some patience before seeing major changes as there are only five Nordstrom Local stores at the moment.

The Seattle-headquartered retailer will also need solid execution in its product assortment. In the first half of fiscal 2019, sales decreased 4.3%, hurt by challenges with merchandise assortment. While management is working to address this issue and expects some positive momentum during the third and fourth quarter, there are risks that the rebalancing act may take longer than planned.

Analysts are also concerned about Nordstrom's fundamentals, citing an expected challenging holiday shopping season, tariffs, and continued e-commerce disruption, not to mention a weak economy and the effect that could have on the company's efforts. Nordstrom stock currently trades at just 11 times forward earnings, far below its historical levels and the broad market average. Though the current valuation presents a bargain, investors may want to wait for signs that management's merchandising efforts and new local market strategy are indeed fueling a turnaround, especially during the holiday season, before buying into the company.