Please ensure Javascript is enabled for purposes of website accessibility
Free Article Join Over 1 Million Premium Members And Get More In-Depth Stock Guidance and Research
By Rich Duprey - Nov 1, 2019 at 10:30AM

Sales of its signature sneaker brand are still growing, but not nearly at the rate they have been.

In its first full quarter free from the Wrangler and Lee denim business spinoff, VF Corp ( VFC 0.59% ) stumbled as sales from its Vans sneaker business decelerated in the quarter. Although the brand still posted double-digit currency adjusted growth of 16% over the year-ago period, it was markedly lower from the 27% gains reported a year ago and even the 23% increase of last quarter.

Coupled with VF coming in short of Wall Street's revenue and earnings estimates, the market tripped up VF's stock, sending it 7% lower. Let's see whether that's an opportunity for investors. 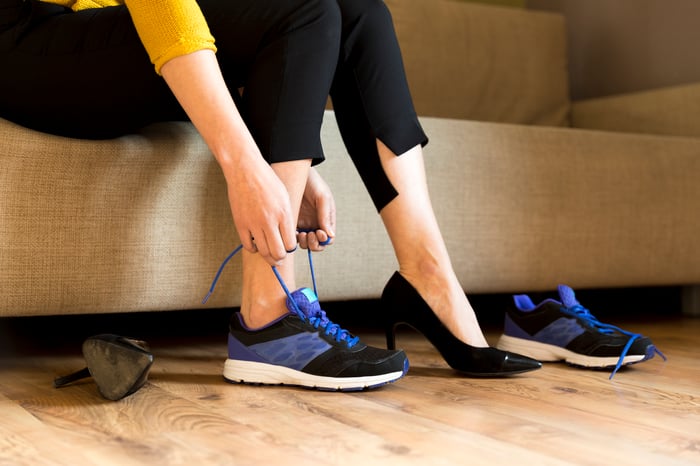 VF missed analyst sales projections of $3.42 billion by coming in light with revenue of $3.39 billion, although that was still up 7% from last year after adjusting for the divestiture of the jeans business in May, the acquisitions of the Icebreaker and Altra brands, currency fluctuations, tax law changes in Switzerland, and relocation of the company's headquarters to Denver.

There's obviously still a lot going on with VF that makes looking at it not so neat and tidy, but adjusted earnings of $1.26 per share also missed expectations of $1.30 per share and were flat with the year-ago period.

Vans, as one of VF's most important brands, was hurt by some major product launches from the competition. Nike ( NKE 0.14% ), for example, launched the Zoom Freak 1, the signature sneaker of NBA MVP Giannis Antetokounmpo, which was Nike's largest initial launch for its basketball business and it quickly sold out. Nike also rolled out its latest sneaker tech, Joyride, an innovative cushioning system that has each sneaker filled with thousands of beads to make it like running on sand.

While the U.S. remains VF's biggest market, international growth is important for the future, particularly in China, which saw sales jump 25% year over year. However, it also got sucked into the protests that are occurring in Hong Kong.

VF was holding a global sneaker design competition, and one of the entries paid homage to the people protesting China's autocratic rule. VF pulled the entry, which had been one of the leading designs, because it said it's never taken a political stance on issues, but Vans sales took a big hit there regardless.

From a business perspective, VF is fortunate Hong Kong sales aren't enough to materially affect the total. Executive VP and CFO Scott Roe told analysts on the conference call, "The city of Hong Kong is relatively small as a part of our total China business and we see really strong elements elsewhere in China, but Hong Kong specifically is definitely impacted. It's just not large enough to have a huge impact on overall VF."

VF has expanded its relationship with Alibaba's Tmall Innovation Center to now help grow Vans, The North Face, and Timberland in China by giving the e-commerce site exclusive rights to sell the gear in exchange for insights into hundreds of millions of Chinese consumer shopping habits, so there's a good chance mainland sales will continue expanding.

There are drivers for growth, though, for both Vans and The North Face. Skateboarding has now become an Olympic sport, as has climbing, and VF will be having a prominent marketing position for both of its big brands at the 2020 Olympic Games in Tokyo.

VF has raised its guidance for both Vans and The North Face for the full year, with the former expected to rise 13% to 14% and the latter 9% to 10%. Such growth rates being well below recent rates of growth apparently has some investors worried.

Despite the growth opportunities for VF Corp's business, its stock doesn't offer investors a discount. Even after the pullback, it trades at over 21 times next year's estimated earnings and goes for over 2 times its sales. VF's enterprise value also offers some nosebleed valuations of over 100 times the free cash flow it produces.

It's still a solid business, but a slowing manufacturing sector here at home, which led to a decline in work segment sales, could signal consumers may become cautious about making discretionary expenditures.

Yet the fact VF raised guidance for both Vans and The North Face shows these aren't damaged brands and still have plenty of room for expansion, though at slightly slower rates than what investors were accustomed to. Investors should exercise caution about buying in at these slightly lower levels because there may be more chances in the near future to by VF stock at even better prices.