Amazon (NASDAQ:AMZN) bought Whole Foods for just under $14 billion in 2017 to boost its grocery sales, and now it's offering free two-hour delivery of these groceries to Prime members. The move is part of Amazon's effort to compete with Kroger (NYSE:KR) and other supermarket chains.

Previously, Amazon charged the $14.99 monthly fee for unlimited grocery delivery in addition to its $119 annual Prime membership. But now, Prime members can get free delivery on Amazon Fresh (available in 19 cities) or from Whole Foods. Amazon has more than 100 million Prime members in the U.S. 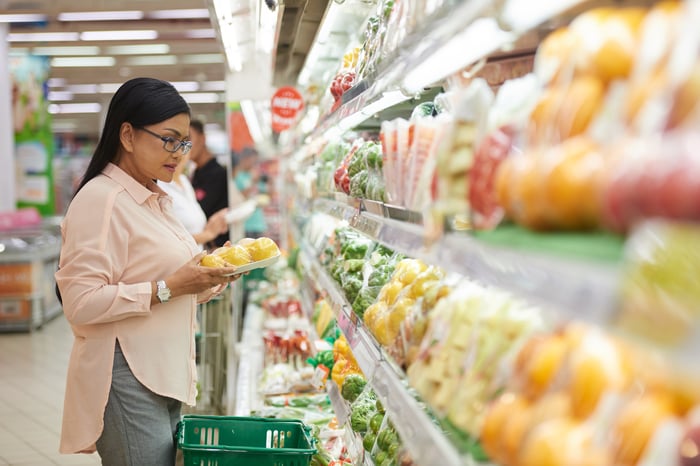 The grocer also launched its Kroger Rush delivery service for "need-it-now" items to be delivered in 30 minutes, which costs $5.95 per delivery.

And Kroger is pursuing alternative profit streams, including Kroger Personal Finance, Kroger Media, and its 84.51° data analytics unit. Kroger expects those ventures to contribute an estimated incremental $100 million in operating profit for 2019, compared with 2018. Kroger sees its personal finance offerings as a way to increase traffic and customer loyalty, while Its 84.51° unit is a key competitive weapon helping it compete against data powerhouse Amazon. The in-house analytics firm recently deployed Kroger Precision Marketing, which uses customer purchase data from the grocer's 60 million shopper households to launch marketing programs across a digital spectrum. And Kroger partnered recently with Microsoft (NASDAQ:MSFT) to pilot two data-driven connected stores, which guide shoppers through the aisles to products they want to buy.

Kroger is investing money and resources on the backend through its partnership with U.K. online grocer Ocado. In September, Kroger identified Dallas as its fifth location to build an automated warehouse to fulfill online grocery orders. The automated warehouses, called customer fulfillment centers (CFC), use digital and robotic technology to fill grocery orders. When Kroger and Ocado announced its partnership in May 2018, the companies said they plan to open 20 CFCs in the U.S. over the next three years.

While Kroger is devoting resources to the online business, Amazon is putting more money into brick and mortar. Amazon aims to compete with Kroger and other grocers with its own chain of stores across the U.S. Earlier this month, it announced plans to open dozens of stores, starting with Los Angeles, Chicago, and Philadelphia. The stores will operate separately from Whole Foods, which focuses on organic items, and are likely to feature prepared foods as well as grocery items.

Not to be outdone, Kroger is offering consumers more reasons to visit their stores (and, of course, spend money while they're there.) Business Insider reported that Kroger is working with United Parcel Service (NYSE:UPS), the U.S. Postal Service, and FedEx (NYSE:FDX) to bring package-delivery services to its stores. With Kroger Package Services, select Kroger stores will accept packages, including those that require signatures, and store them in a secure area until customers can pick them up. KPS also will allow Kroger shoppers to drop off pre-labeled packages or bring in unboxed items for shipping.

Amazon may be the retail behemoth that casts a huge shadow on traditional grocery stores, but Kroger is a giant in its own right. It's the largest supermarket chain by revenue in the U.S. and the nation's second-largest general retailer, boasting 2,800 stores in 35 states.

Kroger price/earnings ratio of 12.48 is significantly lower than the market average P/E of 20.1 for companies in the consumer retailing industry. This probably indicates market pessimism because of its relatively modest earning per share growth (it's been around 6.8% a year for the past five years). But it also means that it could be undervalued; it's now at a pretty low price because of the Amazon news, which may mean it's time to put some of its shares in your cart.