Restaurant Brands International (NYSE:QSR) recently released its third-quarter results, which continued to highlight one area of concern: Tim Hortons. Not only were same-store sales down this quarter, but the popular Canadian-based coffee shop also saw its total systemwide sales, which includes all corporate and franchised restaurants, decline by 0.1%. It's a big problem for Restaurant Brands, especially given how well its other brands have been doing.

Last quarter, both Restaurant Brands' Burger King and Popeyes brands saw double-digit sales growth at 10.7% and 15.6%, respectively. Same-store sales growth, which only looks at locations that were operating a year ago, told a similar story: Burger King rose by 4.8% and Popeyes had the strongest growth of all at 9.7%. Meanwhile, Tim Hortons' same-store sales were down 1.4%. 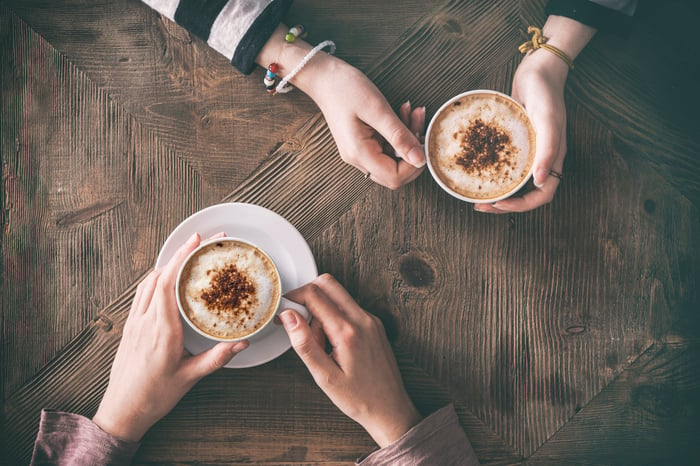 Why growing Tim Hortons should be a priority for the company

Despite the disappointing sales numbers for Tim Hortons, it continues to be one of the bright spots when it comes to earnings. Its adjusted EBITDA of $301 million was 18.5% higher than the $254 million Burger King generated, and more than six times the $47 million earned by Popeyes. And that's actually down from a year ago, when Tim Hortons' profits were nearly 30% higher than Burger King's and seven times more than Popeyes.

The strong margins generated by Tim Hortons highlight why it's very important for Restaurant Brands to be able to find a way to generate growth for the coffee shop chain. While it's very popular in Canada, that market has been saturated, and in order for Tim Hortons to grow, it will need to replicate some of that success in other markets as well.

International expansion is an area of focus

Moving into other parts of the world is one way Tim Hortons hopes to find new growth opportunities. While it hasn't been able to make significant progress in the U.S. market, the coffee shop chain has expanded into Spain, and it also opened its first restaurant in China earlier this year.

Not only will expanding internationally give Tim Hortons a boost in its systemwide sales, but it could allow the restaurant to benefit from growth in other parts of the world and not be dependent on one key market. Despite producing strong profit for Restaurant Brands, Tim Hortons has significantly fewer locations than Burger King. Its 4,887 up-and-running shops are a little more than a quarter of the number of Burger King restaurants operating around the world (18,232).

There's definitely a lot more room for Tim Hortons to grow in foreign markets, but it won't happen quickly.

The good news for investors is that this isn't a new development for the company, and these problems are already well-documented. While it's disappointing things haven't improved for Tim Hortons, it's more or less the status quo, and that's why although the growth numbers were underwhelming, the stock declined a modest 5% in the days following the results.

However, for a growth stock that's trading at more than 26 times earnings, investors should be expecting a lot more growth from the company. Revenue growth of 6% for the entire company is not going to cut it for long, and Restaurant Brands is going to have to find a way to jump-start Tim Hortons -- and soon.