Please ensure Javascript is enabled for purposes of website accessibility
Log In Help Join The Motley Fool
Free Article Join Over 1 Million Premium Members And Get More In-Depth Stock Guidance and Research
By Donna Fuscaldo - Nov 2, 2019 at 7:45AM

Apple's stock is surging as it boasts a market cap of more than $1 trillion, but that isn't fazing bulls who are willing to pay up for the stock.

Apple's (AAPL 2.58%) stock has been on a tear in recent weeks as the iPhone maker benefits from progress in trade negotiations between China and the U.S., demand for the iPhone 11, and talk that it could be rolling out a lower-priced iPhone at the start of the new year. Add a services business that is growing to the mix, and it's not surprising investors are paying a premium for the iconic tech company.

Year-to-date shares of the Cupertino, California technology powerhouse are up 72%. That compares very favorably to the S&P 500, which is trading 19% higher. Alphabet's Google is only up 18%, while Facebook is trading 35% higher and Microsoft shares have appreciated 40% so far in 2019.

It wasn't always the case for Apple. Earlier in the year, the company was dealt a blow when billionaire investor Warren Buffett said he wouldn't purchase more shares of the stock because he thought it was too pricey. That was in February and came after a six-month period in which Apple's stock had declined 20%. Since then, shares have surged and Apple's market capitalization has remained above $1 trillion. Just a couple of weeks ago its stock reached a new all-time high of $236.21, surpassing the previous all-time high of $233.47 set in October 2018. The jump in Apple's stock has a lot to do with progress being made on the protracted trade war between China and the U.S.

An end to the trade war would be welcome news

Resolving the trade war would be welcomed by investors and Wall Street because it would mean Apple wouldn't have to increase prices or shoulder the tariffs on $250 billion worth of goods. Talks between the U.S. and China are still ongoing, with both sides saying they are making progress on the first phase of a deal they are aiming to sign in November. If that happens, it may lift Apple's stock even higher. Apple loses big in the trade war since many of the iPhone's parts come from China and the country is also a big market for the company's phones, apps, and services.

Outside of progress on the trade front, Apple is benefiting from the launch of its iPhone 11, iPhone 11 Pro, and iPhone 11 Pro Max models. In this latest product update cycle, Apple priced the iPhone 11 at $699, which appears to be resonating with consumers, with reports surfacing that Apple is increasing production on the devices by as much as 10% to meet demand that is tracking better than anticipated. That jells with comments Apple CEO Tim Cook made in an interview with a German newspaper earlier in October. Cook said the iPhone 11 is seeing a "very strong start." 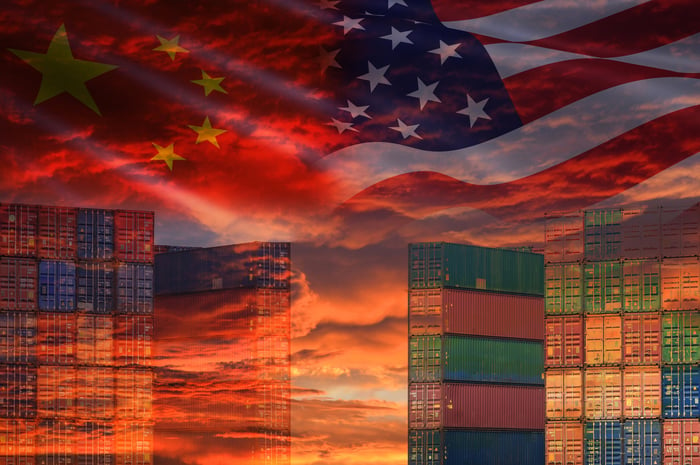 A cheaper iPhone could open a new market for Apple

On top of better-than-expected demand for the iPhone 11, there are rumors that Apple will roll out a lower-priced iPhone similar to the iPhone 8 that will run on its newest A13 processor. That means users will get all the power needed to run Apple's apps and subscriptions, but in a smaller form factor with a cheaper price point. Observers are calling the device the iPhone SE2. It's expected to have a 4.7-inch screen and a price tag that may be around $350. Apple analyst Ming-Chi Kuo of TF International Securities predicts shipments could reach 30 million to 40 million units in 2020.

For its fourth quarter, which Apple reported earlier this week, the company credited its growth to services, wearables, and iPads. Subscriptions grew 40% during the quarter ending in September with the number of paid subscribers now at 450 million.

While Apple wasn't able to provide much insight into how the new iPhones were doing, and while it did report iPhone sales that were 9% lower than last year's fourth quarter, investors are still smitten. They've turned their sights to the upcoming holiday selling season and have taken the company's revenue guidance of between $85.5 billion and $89.5 billion for the first quarter -- which tops Wall Street views -- as a reason to be upbeat. It doesn't hurt that Apple ended the quarter with $205.9 billion in cash. If Apple does indeed enjoy a strong holiday quarter, the stock may increase even more.