Please ensure Javascript is enabled for purposes of website accessibility
Free Article Join Over 1 Million Premium Members And Get More In-Depth Stock Guidance and Research
By Jeremy Bowman - Nov 3, 2019 at 11:27AM

Bargains are hard to find in today's market. Here are a few picks to jump-start your search.

With the stock market near all-time highs, value stocks have been mostly overlooked over the last decade. But lately, we've seen signs that investors may be coming back to value stocks. High-priced cloud computing stocks have mostly pulled back in recent months, while low-priced sectors like retail and energy have gotten a second look from investors. 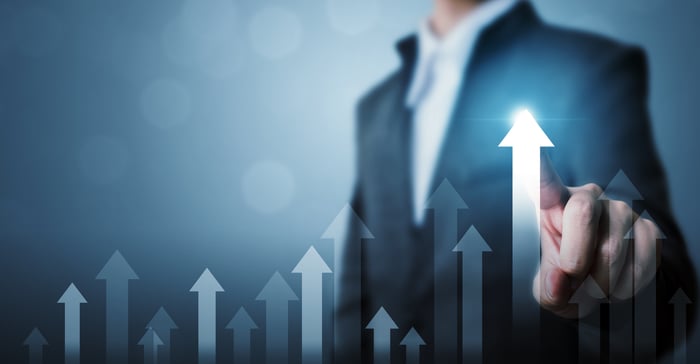 It may seem odd to see Facebook's name on a list of value stocks -- after all, the tech giant is still young and growing fast. But Facebook has a number of attributes that should make it appealing to investors who know that value is more than a low price.

Facebook's generally accepted accounting principles (GAAP) earnings have been repressed through the first half of the year by fines from the Federal Trade Commission over privacy violations and an appeals court decision, but the company's earnings potential shined in its third-quarter earnings report as earnings per share jumped 20% to $2.12, ahead of estimates at $1.91.  Backing out the one-time events including the fines, Facebook has earned $8.38 per share over the last year, giving it a P/E ratio of 23, essentially even with the S&P 500's P/E at 22.6.

Accounting for the $52.3 billion in cash and investments Facebook has on it balance sheet, Facebook's P/E is 21, and that's for a company  growing much faster than the average firm in the S&P 500. Through the first three quarters of the year, Facebook's revenue has grown 27.5%, and the company has a huge economic moat thanks to the network effects and switching costs inherent in a social network of more than 2 billion people. Its high margins should also give value investors some security that its business model is defensible and enduring. Headline risk may be an occasional thorn in the company's side, and lingering criticism of the company may be the reason that the company isn't priced higher -- but considering its growth rate, the stock looks cheap.

Capitalize on an out-of-fashion retailer

Macy's has been the worst-performing stock in the S&P 500 this year, falling 48% as the company has trimmed its earnings guidance, and worries have mounted that it could follow the path of Sears and J.C. Penney into oblivion. However, Macy's stock has now gotten too cheap to ignore, and there are a number of reasons why the company doesn't deserve to be lumped in with its ailing peers.

First, Macy's is solidly profitable, and is on track to generate nearly $1 billion in profits this year. Second, comparable sales continue to move in the right direction. They have edged up 0.4% this year, though margin compression has been a concern -- gross margin has fallen from 38.5% to 39.7%, which is part of the reason the company was forced to cut its guidance. Finally, Macy's has a trove of valuable real estate that it's slowly spinning off and unlocking the value of. For instance, the company recently said it would sell its Downtown Seattle store at the end of the holiday season, and it's planning to build an 800-foot tall office tower over its flagship store in New York's Herald Square. This year, the company expects to have $100 million in asset sale gains, and its real estate was valued at around $16 billion by the investment firm Cowen in 2016. By comparison, the company's market cap is just $4.8 billion.

To further entice value seekers, the stock also offers a well-funded dividend yielding 9.7%. To be fair, Macy's is risky considering the upheaval in retail, but the stock is now trading at a P/E of less than 6 based on this year's expected earnings per share, and its real estate should put a floor on the stock.

Investors have been talking about cord-cutting for years, but the decline of cable has actually been much slower than you might think. AMC Networks, the home of hit shows like The Walking Dead and Killing Eve, continues to grow revenue with the help of international markets, and its earnings per share also rose 8% through the first half of the year to $4.73 with the help of share buybacks.

Though AMC is best-known as a cable provider with networks, including its namesake, BBC America, We TV, Sundance, and IFC, the company has planted its flag in the streaming channel with a number of growing services, including Acorn TV, UMC, Shudder, and Sundance Now. AMC has also been aggressively buying back its stock, taking advantage of the low price of its shares, which now trade at a P/E of just 5.

However, the biggest reason for value investors to consider AMC Networks is its appeal as an acquisition target. The company's back catalog includes several popular shows like Mad Men, Breaking Bad, and Portlandia, and with a number of new streaming services set to launch, demand for content has never been greater. Mergers and acquisitions have been common in the cable industry lately as a wave of consolidation has hit and networks have looked to partner up to leverage content and other assets for prospective streaming platforms. CBS recently merged with Viacom, and Discovery acquired Scripps Networks, playing a significant premium.

Considering its valuable library of content and track record of producing hits, AMC should be a valuable prize in the streaming wars -- and even without a buyout, it can still deliver a steady stream of cash flows that offer a good value at today's price.

Facebook Plans to Hire 10,000 New Workers. Time to Invest in the Metaverse?

These 2 User Metrics From Facebook's Third Quarter Should Bug Shareholders

The Silver Lining for Facebook in Apple's iOS Changes

Is Facebook's Focus on the Metaverse Good or Bad News for Roblox?