The meal kit delivery specialist is proving its business is not a sustainable one.

Blue Apron (APRN -4.66%) is quickly becoming a footnote in the industry it helped popularize. The meal kit delivery specialist reported third-quarter earnings that show sales to a dwindling list of customers continue to fall, even though those that remain are buying more meals through their subscription.

The fact that all of this is by design indicates Blue Apron is properly targeting the small niche of consumers it can service, but at the same time, this is not a business that can scale, making it a poor investment. 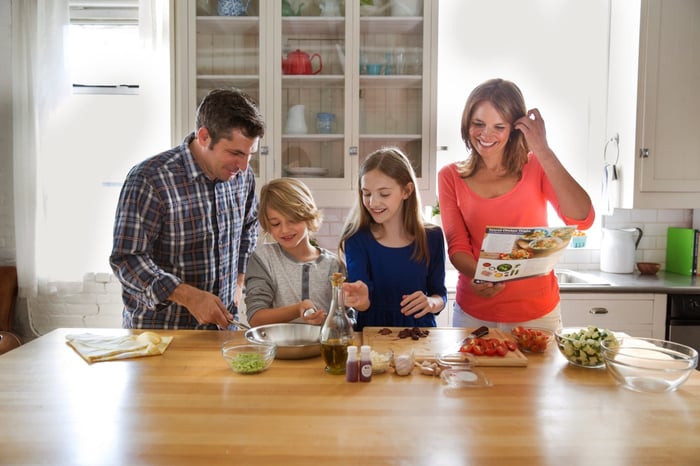 A universe collapsing in on itself

But Blue Apron is still shedding active customers, which have now fallen to 386,000, a 40% drop from last year and also 14% fewer than it had on its rolls just three months ago. That's led to a commensurate decline in the number of orders placed and the frequency at which customers place them, even though each customer now buys a little more, making each of those customers worth more to the company.

Yet last quarter may have been the peak for Blue Apron, for lack of a better word, because although the average order value and the average revenue per customer are higher year over year, both metrics are down sequentially.

Still searching for customers who need this service

But Blue Apron sees this as a positive development. CEO Linda Findley Kozlowski said in a statement, "We're pleased to see the continued strengthening of our customer base, with year-over-year improvements in certain key customer metrics in the third quarter."

That's an acknowledgement the meal kit delivery company is getting down to its core, dedicated customers, ones that it hopes to continue to profitably service, but the results indicate it hasn't fully gotten there yet and it still has a long way to go.

Customer defections are still large, and though the rate of hemorrhaging seems to be slowing somewhat, Blue Apron has not reached the bottom. A year ago, I had suggested that level could be as few as 200,000 customers based on the comments of then-CEO Brad Dickerson and how Blue Apron had realigned its target demographic. It increasingly looks like that could be close to reality.

The company spent $12.1 million on marketing in the third quarter, a 34% increase from the previous quarter though about half of what it spent last year -- and it still shed customers. There may be nothing Blue Apron can do other than to get down to that core mass who don't think meal kits are an expensive, choice-limiting option they're willing to pay for. And when they can find numerous competing meal kit selections in their local grocery store, a place they're shopping anyway, then an online service, regardless of whether it ties you to a subscription, becomes superfluous.

Blue Apron's third-quarter earnings indicate there is more pain to come, so despite being a cheap stock, it's not a good value, and investors may find the landing harder than they'd imagined.