Management is investing in growth initiatives to improve the company's long-term growth prospects, but these investments put a dent in the bottom line last quarter.

Sometimes, growth stocks move sharply on earnings news, especially if the report is surprisingly above or below expectations. Etsy ( ETSY -7.31% ) stock, for example, traded down about 16% after releasing its third-quarter earnings report on Oct. 30. The company posted stellar revenue growth, but investments in growth initiatives hurt the bottom line.

The stock could be pulling back because of valuation concerns, but there doesn't appear to be anything in the results to suggest Etsy is underperforming. To the contrary, it appears well positioned for continued growth heading into 2020. 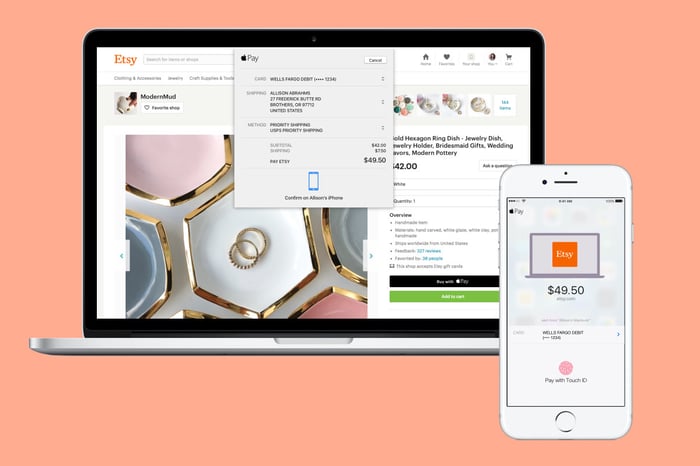 Overall, Etsy reported a strong quarter with revenue up 31.6% year over year. Revenue got a small bump from the recent acquisition of Reverb, which contributed $6 million to the top line. Excluding the acquisition, revenue would have increased by a still solid 27.6% year over year in the third quarter.

What may have investors spooked is the 25.6% year-over-year decline in net income. However, the drop was driven primarily by three investments aimed at building the foundation for long-term growth. One of those investments was the $271 million cash transaction for Reverb, which closed in the third quarter. That business is currently operating at a loss, which cut into Etsy's profitability. Management expects Reverb to reach a break-even point based on EBITDA (earnings before interest, taxes, depreciation, and amortization) by the end of 2020.

Reverb is a leading online marketplace for new, used, and collectible music gear, such as vintage instruments, meaning the deal basically serves as a category expansion for Etsy. For the third quarter, Etsy reported gross merchandise sales (GMS) of $1.2 billion, a 30% year-over-year increase -- and Reverb contributed $77 million to that total.

In addition to the losses at Reverb, Etsy's gross margin came under pressure from higher expenses related to payments processing, as well as costs associated with the investment in Alphabet's Google Cloud and Google Shopping. Etsy has been making significant changes to its search algorithms to make discovery on its marketplace more efficient and personalized for the buyer, and doing so involves migrating data over to Google Cloud. That process is expected to be completed by the beginning of 2020.

The company also launched Etsy Ads, which brings sellers who previously used the promoted listings service and Google Shopping over to one single platform. This move is intended to make it easier for sellers to manage their ad budgets across different platforms.

It will take over a year to fully communicate the benefits of the new ad platform to sellers. Management believes that many sellers are already earning good returns on their ads but that their budgets are too low. That situation sets the company up to potentially improve the return on investment for its marketing expenses, as improved ad metrics at the seller level will allow management to shift its marketing dollars to promoting the Etsy brand and raise consumer awareness.

Management believes the investments in search and Etsy Ads should improve the long-term growth in GMS, as CEO Josh Silverman expressed during the third-quarter conference call.

"Q3 was another eventful quarter," Silverman said, noting "improving underlying fundamentals, coupled with transformative updates to the business, which we believe laid the foundation for strong growth into the future."

Etsy has had a good year. Revenue and adjusted EBTIDA are up 36% and 49%, respectively, through the first three quarters of 2019. Etsy is also seeing positive results in its efforts to improve buyer frequency, as the number of habitual buyers grew faster (24% year over year) than the broad active buyer base (19%) in the recent quarter.

For the full year, management raised guidance, calling for revenue to increase 34% to 35% over 2018, with adjusted EBITDA margin expected to be relatively stable at 22% to 23%.

The short-term-focused momentum crowd may not like last quarter's earnings decline, but Etsy still looks like a good investment.

Here's Why Etsy Stock Is Soaring on Thursday