2019 has been a surprisingly good year for cable stocks. While the cord-cutting trend isn't slowing down anytime soon, companies that sell both high-speed broadband along with linear television have still been able to generate growth through a mix of higher-speed broadband services and new mobile phone plans. Falling interest rates are also helping, as these stocks tend to use lots of debt in their capital structure.

Broadband is now a must-have service, akin to water and power, and most consumers have only two choices for broadband in their given area. Therefore, these companies are garnering a reputation for being relatively recession-resistant.

Charter Communications (NASDAQ:CHTR) has ridden these trends to new all-time highs in 2019, boosted by both the general cable trends mentioned above, as well as a number of good things happening at the company level. But after its recent surge, is the stock a buy? 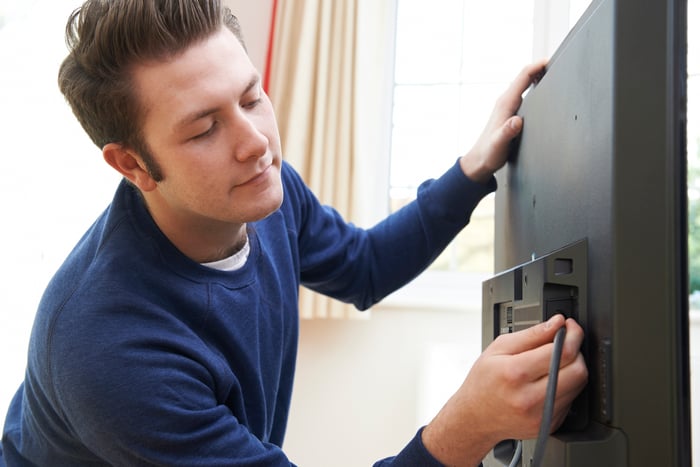 2019 has marked an inflection point for Charter, as it finished integrating two large acquisitions: Time Warner Cable and Bright House Networks, which it acquired in 2016. Not only did Charter purchase two very large companies -- Time Warner Cable was the second-largest cable company at that time, behind only Comcast -- but Charter also then set about integrating the three companies and upgrading their services.

This included "in-sourcing" customer service representatives and paying them a higher salary in an effort to boost Charter's customer service and reduce churn. It also included bringing all three systems onto all-digital DOCSIS 3.1 technology, which offers higher speeds and enables two-way communication. Finally, Charter also had to cobble together many different back-office systems into one unified platform, and bring all three footprints onto a single pricing and packaging platform.

Charter is now reaping the benefits of these large, multiyear projects, and it's showing up in the company's results. In the past quarter, Charter's residential segment showed accelerating internet customer growth of 351,000 net additions, up from 266,000 from the year-ago quarter. While the company lost 213,000 landline phones, that was more than offset by 275,000 mobile additions, which itself showed an acceleration over the 208,000 net mobile adds in the previous quarter. While Charter did lose more video subscribers, it was relatively tame by comparison, at 77,000 video losses, up a bit over the 66,000 losses in the year-ago quarter.

All of this led to a relatively solid 5.1% revenue growth and 3.4% adjusted EBITDA (earnings before interest, taxes, depreciation, and amortization) growth, though it's a better-looking 5% EBITDA growth when excluding expenses for the new mobile initiative. However, the big story is the company's free cash flow, which, due to lower capital expenditures, more than doubled, from $532 million to $1.27 billion. Excluding the spending on the new mobile initiative, the "cable-only" free cash flow would have been $1.53 billion.

One other factor in Charter's stock is that it doesn't pay a dividend, choosing instead to plow all of its free cash flow into share repurchases. In the quarter, Charter spent a whopping $3.1 billion on repurchases, purchasing 2.5% of its shares outstanding, and has repurchased 23.4% of shares since September 2016, or about 8% per year.

Charter posts little in the way of earnings, so it is more appropriate to value the company based on either a price-to-free-cash flow, or even an enterprise value-to-EBITDA basis. Over the last 12 months, the company made around $16.5 billion in EBITDA, and has spent just $7.4 billion in capital expenditures -- though again, management forecasts this number to decrease to less than $7 billion by the end of this year.

Charter is also heavily leveraged, and will also incur about $3.9 billion in interest expense on its $74.2 billion in debt, on top of its diluted market cap of roughly $113 billion. Charter has a big tax shield due to past years' losses, and likely won't pay cash taxes for the next two years.

This adds up to a price-to-cash-flow ratio of around 20, and an EV-to-EBITDA ratio of 11.3. That's not exactly cheap, but it's not super-expensive, either, for a predictable, growing business in a world of low interest rates.

I've personally trimmed some of my Charter stake on this big run-up, but continue to hold some shares for now. The huge gains seen in 2019 may be a thing of the past, but the stock can still move higher from these levels. While it doesn't pay the dividend some investors crave, Charter has been a master capital allocator, and with a recession-resistant business, investors could do far worse in these fearful times.