The stock is simply too expensive.

Skeptics of Chipotle Mexican Grill ( CMG -1.20% ) must admit that the company has posted a solid comeback under new CEO Brian Niccol, who took the reins from founder Steve Ells in early 2018. By focusing on digital ordering, a new loyalty program, and menu innovation, Niccol has rejuvenated Chipotle's same-store sales, which had plunged after several food safety scandals beginning in late 2015, and hadn't staged much of a comeback until Niccol's arrival.

In its recent third-quarter earnings release, this trend continued, with comparable sales accelerating to 11%, leading to healthy beats on both the top and bottom lines versus analyst expectations.

Yet as of this writing, Chipotle's stock is down nearly 10% from its levels before the recent earnings report. So why is the market giving the stock such short shrift? 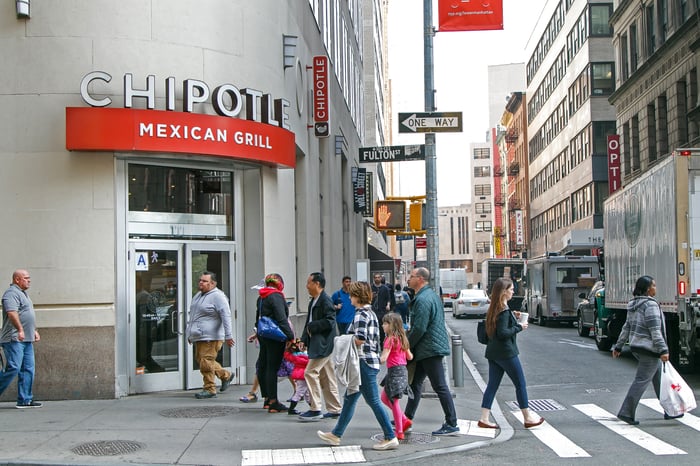 It's fair to say that Chipotle's stock rise over the past few years has already factored in a lot of the good news we're currently hearing. With its trailing P/E ratio of 70 and a forward P/E ratio a still-stratospheric 56 times 2020 earnings estimates, investors are clearly factoring in lots of growth into the future. These multiples are far, far higher than those of Chipotle's large-cap restaurant peers. 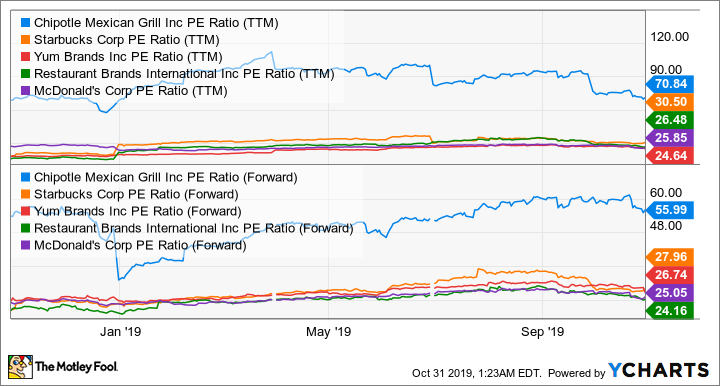 And while Chipotle's 11% comps, 14.6% revenue growth, and 87.9% digital sales growth are no doubt impressive, that type of growth needs to continue well into the future for Chipotle to justify this high of a multiple.

With such strong growth numbers for Chipotle, you might think it has fully recovered from its food safety scandals, which began in the fourth quarter of 2015. However, if you look at the company's comparable-store sales since that time, you'll see that store-level sales are actually still below the levels of 2015, immediately before the E. coli and norovirus scandals at the end of that year.

These same-store-sales figures are a bit of an imperfect measure, since they apply to restaurants open for at least a year, and Chipotle has been opening new restaurants since that time. Yet the restaurant count has grown by only about 28% since then. If anything, these numbers may overrate comparable sales growth, since newer restaurants are likely to see higher comparable sales in their early years as they ramp up.

Chipotle has also increased prices during this time, both in 2017 and throughout 2018, of around 5%-7% in total. It's not clear if Chipotle can or will do that again in the near term, which means it may have to earn its growth almost entirely through traffic gains.

In addition, Chipotle will need to grow just to keep up its current margins, as labor wage inflation has increased over this time as well. On the conference call with analysts, CFO Jack Hartung said labor costs continue to increase in the 4%-5% range consistently.  That means sales will probably have to well exceed the old levels to get back to restaurant-level operation margins in the high-20s, where they were before the crisis, up from last quarter's levels of 20.8%.

Many of us regret not owning Chipotle on its recent two-year surge, but that doesn't mean you should chase the stock at these levels. When a company reports strong earnings and the stock goes down, that could be a sign that investors are becoming skeptical of its valuation. Niccol deserves a ton of credit for getting Chipotle in the strong shape it's in, but the stock seems to have gotten a bit ahead of itself at the moment.