Alphabet (NASDAQ:GOOG) (NASDAQ:GOOGL) subsidiary Google and Facebook dominate the U.S. digital advertising market. Google could claim 36.2% of that market this year, according to eMarketer, as Facebook grabs 19.2%. 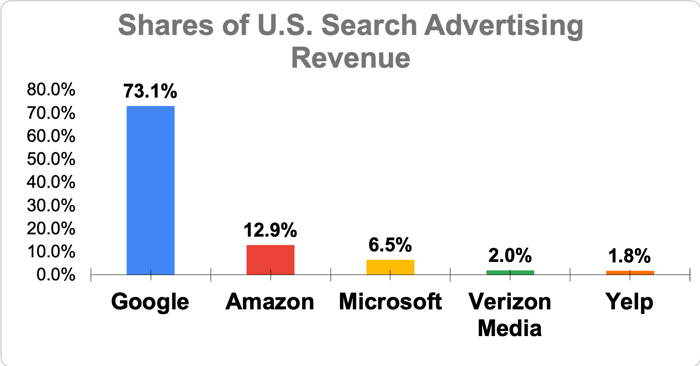 eMarketer also expects Amazon's search business to grow nearly 30% this year and boost its search revenue to $7.09 billion, or 2.5% of its total estimated revenue. Amazon already surpassed Microsoft as the third-largest digital ad platform in the U.S. last year.

Amazon's advertising business is growing because most U.S. internet users start their product searches on Amazon instead of Google. The Seattle-based tech giant leverages that lead, along with its e-commerce muscle, to sell more ads.

Advertisers are drawn to Amazon because they can craft better-targeted ads with its shopper data while dealing with fewer privacy concerns than Google and Facebook. In short, Amazon's advertising segment could soon become a core growth engine alongside its e-commerce and cloud businesses.

A Foolish Take: Amazon Is Catching Up to Google in Search-Based Ads @themotleyfool #stocks $GOOGL $AMZN $GOOG Next Article
Current