Investors will be looking at these angles when the company reports.

TripAdvisor ( TRIP -0.23% ) reports its third-quarter results Wednesday after the market closes and will host a conference call with analysts Thursday morning. Investors have a lot of questions about both the legacy hotel business and the faster-growing experiences and dining businesses. Analysts expect $460 million of total revenue and $157 million of adjusted EBITDA. Whether TripAdvisor beats or misses these short-term expectations matters less than the following bigger picture topics. Here are three questions I have for TripAdvisor CEO Steve Kaufer.

When will site visits stabilize?

Management began dialing back the company's hotel-related online marketing spending in late 2017 and has seen significant cost savings as a result. For example, direct selling and marketing expense dropped by $86 million last year and was down another $59 million during the first half of this year. These cost savings have driven segment margins up to an impressive 43% last quarter. 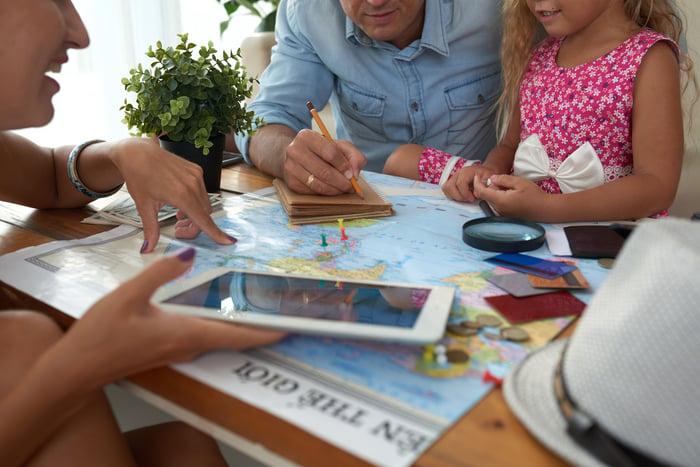 While higher profitability is great, the consequence of cutting online marketing spending is that the company has been acquiring less traffic from search engines. While management has said this traffic was mostly unprofitable anyway, it still creates uncertainty because it is difficult to have great confidence in a web property with declining traffic levels. In the second quarter of 2018, TripAdvisor reported it had 456 million average monthly unique visitors. In the second quarter of 2019, it reported 417 million.

However, these traffic declines should be mostly temporary. The company finished reducing its online marketing spending earlier this year and it should remain at a stable level going forward. That means the company should fully lap those cutbacks by early next year, which management believes will allow traffic to stabilize. If that's the case, it would give investors much more confidence in the company's long-term future. TripAdvisor could even return to online marketing channels and grow its traffic again if the economics make sense.

When will the company's media and advertising initiatives show results?

Last quarter, management announced its plans to focus more on maximizing the company's advertising business. To frame the opportunity, management included an exhibit in  prepared remarks that shows the paltry amount of advertising revenue the company makes relative to other web properties, ranging from Twitter at $2.6 billion to Yelp at $907 million to TripAdvisor at $153 million.

Management has indicated the HMP segment should return to revenue growth in the fourth quarter, which should be largely on the back of accelerating advertising revenue driven by higher ad pricing due to more effective ad targeting, more video advertising, as well as new advertising products, including content sponsorship opportunities for hotels, tourism organizations, and restaurants.

The company noted: " ... in recent years, advertisers have increasingly sought brand-safe, non-competitive platforms with specific domain expertise and influence in attractive areas, such as retail, technology, music or travel. TripAdvisor can give advertisers access to a high-intent, global travel audience, enabling them to target and optimize campaigns and improve ad performance."

There are certainly reasons to be optimistic about the company's advertising efforts given there are still more than 400 million unique visitors coming to the site every month. Plus, TripAdvisor is not breaking new ground with enhanced ad targeting and sponsored content. Many other companies have been doing this successfully for a long time, which gives me confidence that management should be able to execute and achieve its goal of at least doubling its advertising revenue over the next three to five years. Additionally, advertising tends to be high-margin revenue, which should allow for substantial earnings growth.

When will the heavy investment spending in the experiences & dining segment pay off?

The faster-growing experiences & dining segment has reported decelerating revenue growth so far this year and management expects that to continue in the year's second half. The recently declining site traffic levels are undoubtedly playing a role in that, which emphasizes how important it is for site traffic to stabilize. At the same time, management is stepping up its growth investments in this segment. Specifically, management is investing more in growing the number of experiences (tours, attractions, activities) that are bookable on TripAdvisor while also spending more to drive bookings. These investments are reducing profit margins in the near term but should help maximize the value of the business in the long term.

Investors will be looking for answers to these questions and more when the company reports earnings.