The oil and gas driller is biting the bullet by slashing spending.

The continued volatility in the oil and gas markets is hurting Chesapeake Energy (CHKA.Q). That was abundantly clear during the third quarter, as the energy company posted a deeper-than-expected loss. Because industry conditions are worsening, the company now plans to slash spending in 2020. That's an abrupt shift for a company that put out a growth-focused plan just last quarter.

Chesapeake Energy reported an adjusted loss in the third quarter of $188 million, or $0.11 per share, which came in $0.02 per share below the analysts' consensus estimate. Driving that weaker-than-expected result was a combination of lower production and natural gas prices. Overall, the company's output fell 11% year over year to 478,000 barrels of oil equivalent per day (BOE/D), though it did rise 3% after adjusting for asset sales and purchases. Meanwhile, its oil production averaged 115,000 barrels per day during the quarter, which, as expected, was down from the record 122,000 BPD it produced during the second quarter due to its timing in completing new oil wells. 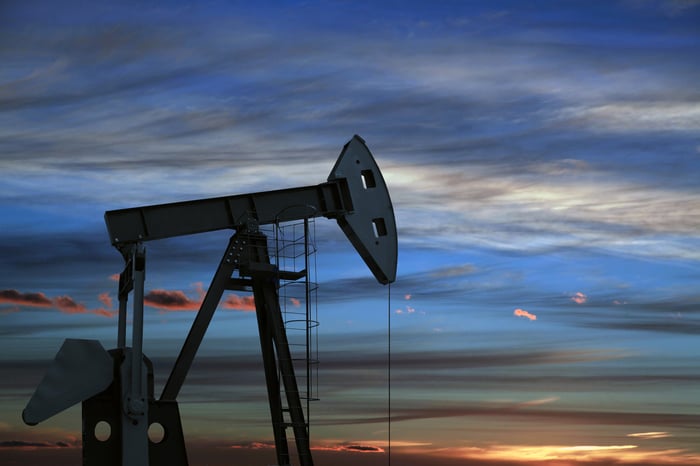 Production in the company's newly acquired Brazos Valley business unit continued to grow, rising from 49,000 BOE/D in the second quarter to 53,000 BOE/D during the third. Meanwhile, oil output hit a record 40,000 BPD in October as the company brought more wells online. Chesapeake also continued to make progress on reducing costs, including pushing down completed well costs by 21% over the past year.

That helped offset a slight sequential production decline in the company's Powder River Basin operations due to the timing of well completions. The company did drill its first well into the Niobrara formation since 2014 during the quarter, which delivered excellent results, so it plans to complete even more wells in that formation over the coming year.

A look at what's ahead for Chesapeake Energy

Last quarter, Chesapeake unveiled its preliminary spending plan for 2020. It expected to keep capital spending flat with 2019's projected range of $2.1 billion to $2.3 billion. But it would allocate most of that money toward drilling more oil wells, enabling it to grow its oil output at a double-digit rate next year while gas production declined by a double-digit percentage. That would allow it to make about the same amount of money so it would only slightly outspend cash flow, given where commodity prices are projected to be next year.

However, with oil and gas prices weakening over the past quarter, Chesapeake is adjusting that plan. It now intends on slashing spending down to a range of $1.3 billion to $1.6 billion, a roughly 30% reduction from this year's projected level. That would enable it to generate free cash flow, given the current projection for oil and gas prices. It would also provide the company with enough money to keep its oil production flat next year, though its gas output would still decline.

Chesapeake's revised plan for 2020 is a big step for the company, which has historically outspent cash flow to grow production. It's now shifting gears and joining most of its peers by aiming to live below its means. That will enable it to use some of the excess cash it produces to pay down more of its debt, which stood at $9.7 billion at the end of the third quarter. That's an enormous amount of borrowing for a company that has an enterprise value of less than $14.5 billion.

Chesapeake Energy had hoped that the acquisition of its Brazos Valley assets would fuel fast-paced oil growth through 2020. That would enable the company to quickly grow earnings, which would help push down its leverage ratio. Oil prices, however, aren't cooperating, which is forcing the company to shift its strategy again. The hope is that by spending less next year, it can start firming up its financial profile so it can better navigate through what remains a very tough energy market.