For some time now, Mattel (NASDAQ:MAT) has been a tough stock to hold. Shares of the toymaker peaked in 2013, as did revenue and earnings, but have been on a gradual slide ever since. The stock hit yet another new multiyear low in August, largely in response to accusations of accounting irregularities, although deteriorating prospects and the absence of Toys R Us made it an easy target. Never mind the fact that Amazon.com continues to make inroads into the toy market.

The company's recently reported third-quarter results, however, offer some suggestion that perhaps Mattel has turned the corner. Though the stock's initial surge last Tuesday in response to the Q3 earnings and revenue beat eventually leveled off, it looks as if the tide is finally turning bullish. 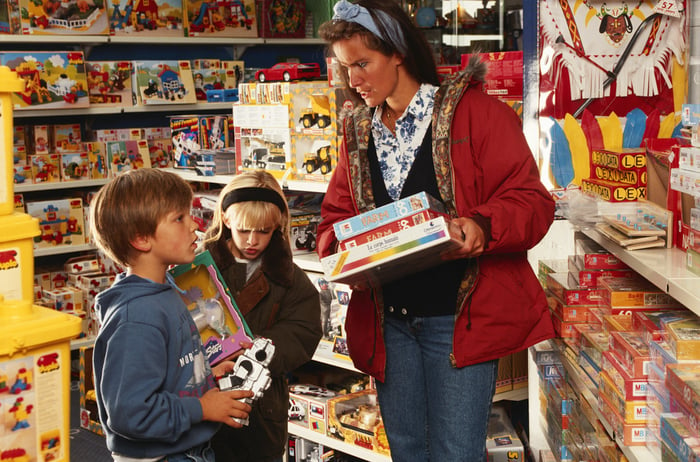 All businesses have challenges, but toymakers may face more than their fair share. Children's toy tastes and interests can stop and turn on a dime. Movie and television product tie-ins, meanwhile, are no longer guarantees of success.

That's largely where Mattel misfired, beginning in 2013, when video gaming consoles started to sell particularly well again along with surging sales of tablets -- handheld devices that many kids found more entertaining than traditional toys. Mattel's familiar brands, including Barbie, Hot Wheels, Monster High, and Fisher-Price, fell out of fashion, and though these brands had a presence in the digital market, they didn't have a commanding one.

Six years and four CEOs later, the company finally seems to have gotten some of its mojo back. Last quarter's sales of $1.48 billion topped estimates of $1.43 billion and came in 3% better than the year-ago figure. Operating profits of $0.26 a share were markedly better than the year-earlier comparison of $0.18, versus analyst estimates of $0.16 per share. Mattel's Barbie lineup was particularly strong during the quarter, overcoming the impact of the last of the Toys R Us chain's store closings in the middle of 2018.

The third-quarter report follows a pleasantly surprising second quarter, too, though perhaps most encouraging is that Mattel was able to do what chief rival Hasbro (NASDAQ:HAS) wasn't able to pull off. Hasbro, more adversely affected by tariffs on goods imported from China, saw earnings slide year over year while revenue fell short of expectations. Mattel CEO Ynon Kreiz commented, "At this stage, we are not seeing any impact from tariffs, and we don't expect anything this year."

Yet there's more to the turnaround effort than numbers. It's what's driving those numbers now, and probably in the future, that makes the toy name such a compelling investment prospect at the moment.

The projected top and bottom lines make clear that analysts believe 2019 is a pivotal year for the organization. But making those optimistic projections into reality involves leadership Kreiz has provided on the company's development, design, and marketing fronts. 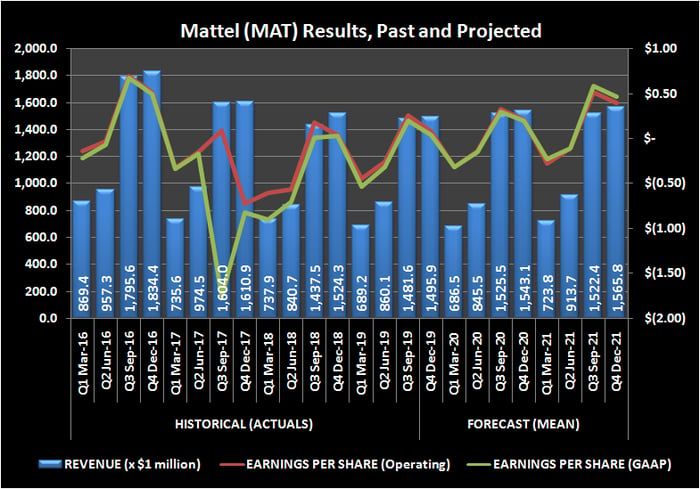 Kreiz is a former television and video executive, co-founding Fox Kids Europe and serving as president of Maker Studios, a digital video platform Disney acquired in 2014. For a time he also headed up Endemol Group, one of the world's biggest independent television production outfits.

Kreiz's time in the entertainment business has helped Mattel redefine what the toy company is, but more than that, he's helped redefine what it's going to be in the foreseeable future. A full-length live-action Barbie film meant for theatrical release is expected next year, with Barney and Hot Wheels films to follow. Movies are not only a profit center in and of themselves but also an opportunity to promote the company's toys. Hasbro did very well with the same model, releasing its first live-action Transformers movie in 2007 to reboot a nearly dead franchise. The six films in the series have prompted $5 billion worth of box office ticket revenue, and hundreds of millions of dollars' worth of toy sales seem to follow each film.

In the meantime, Kreiz's mission to make Mattel an entertainment company appears to be working without the benefit of the silver screen. Not only did its Barbie franchise see a 12% improvement in last quarter's sales, but sales of toy vehicles also grew 15%. For Hot Wheels, one of its simplest and lowest-tech lines, revenue was up 27%.

There's still work to be done. The Amazon threat always looms, and sales of its toddler and preschool toys suffered last quarter.

This has been an increasingly different Mattel since Kreiz took the helm in April of 2018, though. Making its toy lines the focal point of films and television series was a huge missing piece of the puzzle that he's found and put in place in a very short period of time. All told, eight movies have been announced, and at least one ongoing TV series, a re-launch of the Masters of the Universe franchise. More could be in the works, and each has the potential to drive fresh growth that may not yet be reflected in analyst outlooks.

It's tough to step into a stock that's been repeatedly beaten down, but the stage is set to build on last quarter's modestly better results.