Please ensure Javascript is enabled for purposes of website accessibility
Free Article Join Over 1 Million Premium Members And Get More In-Depth Stock Guidance and Research
By Matthew DiLallo - Nov 5, 2019 at 11:09AM

Occidental Petroleum's ( OXY -1.65% ) bold acquisition of Anadarko Petroleum didn't have the immediate impact Occidental had hoped, as it missed analysts' expectations by a wide margin during the third quarter. The energy company reported $93 million, or $0.11 per share, in adjusted net income, which was a disappointing $0.34 per share below the consensus estimate. That lackluster result came even though the company's production came in ahead of its expectations.

Occidental Petroleum closed its acquisition of Anadarko Petroleum in the third quarter. However, despite the addition of that company's oil and gas operations as well as its stake in MLP Western Midstream ( WES 1.02% ), Occidental posted weaker sequential results. That's due in part to lackluster performance in three of its four business units:

Occidental's oil and gas business produced 1.155 million barrels of oil equivalent per day (BOE/D) during the third quarter, including 377,000 BOE/D from Anadarko as well as 41,000 BOE/D from that company's legacy African operations that Occidental plans to sell to Total. That pushed the company's total output up 70% year over year.

The boost from Anadarko, however, masked some weakness in Occidental's legacy oil and gas operations. Overall, its production declined by 0.5% from the second quarter, though it still came in about 32,000 BOE/D above the midpoint of its guidance range. That weaker legacy output, when combined with lower oil prices, put pressure on Occidental's oil and gas earnings during the period.

The company's chemicals business also posted lower sequential earnings. That's due to margin pressure as a result of higher ethylene costs because of some industrywide downtime at plants that produce that key petrochemical. The company partially offset those higher costs with improved volumes across most of its product lines.

Occidental's marketing and other midstream segment, meanwhile, also posted weaker results. That's mainly due to a reduction in the difference in oil prices between the Permian Basin and the Gulf Coast as new oil pipelines came online. The company had been taking advantage of that wide difference by purchasing low-cost Permian oil and using its midstream infrastructure to get it to higher-priced Gulf Coast markets.

Finally, Western Midstream contributed some incremental earnings during the quarter, which helped offset some of the company's other issues.

Aside from closing its acquisition of Anadarko, Occidental made some noteworthy progress on the strategic front. It closed part of its sale of Anadarko's former African assets to French oil giant Total ( TTE -0.46% ) during the quarter, bringing in $3.9 billion in cash. It also sold its interests in Plains All American Pipeline and Plains GP Holding for $650 million. That gave it the money to repay $4.9 billion in debt during the quarter, including all its 2020 maturities. Occidental also returned $600 million in cash to investors via its 7.1%-yielding dividend. 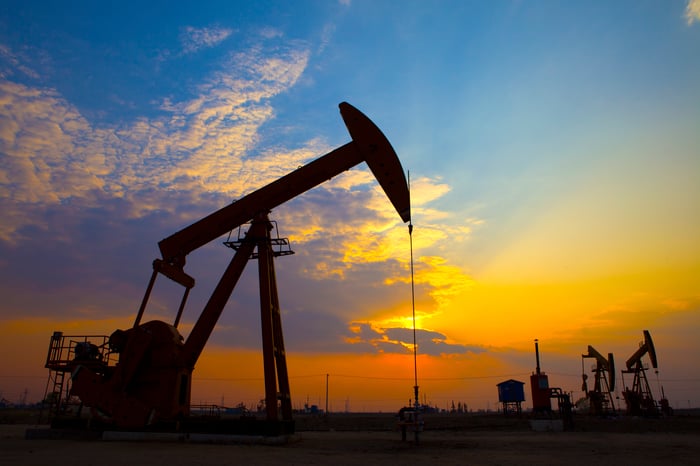 While Occidental Petroleum made good progress on shoring up its balance sheet following the Anadarko deal, it still has a long way to go. It has a stated goal of selling between $10 billion and $15 billion of assets to get its financial profile back on solid ground. A large chunk of that will come from completing the second phase of the sale of Anadarko's former African assets to Total. That deal should bring in another $4.9 billion for a total of $8.8 billion. Add that to the sale of its interests in Plains and a previous joint venture with Ecopetrol, and it will achieve the bottom end of that target range. The company had hoped to sell down its interest in Western Midstream to further reduce debt but has since shelved those plans due to the decline in the MLP's market value.

Occidental plans to take additional steps to pay down debt by cutting its capital spending in 2020. Occidental and Anadarko are on track to spend a combined $9 billion on capital projects this year. However, the merged company now intends to spend only about $5.4 billion next year, a roughly 40% reduction. That will enable it to generate more free cash flow to accelerate its debt reduction efforts while still allowing it to grow its output by about 2% year over year. While that's well below the 5% annual growth the company initially planned to produce after combining with Anadarko, lower oil prices and concerns about its balance sheet are forcing it to be much more conservative next year.

The proof will be in the execution

Occidental Petroleum aggressively pursued Anadarko because it believed that the combination would create more value for investors over the long run. Now the company must deliver. While it made some progress on its strategic plan during the third quarter, it still has a lot of work to do to prove that the deal was the right one for its investors.

Why Energy Stocks Are Down This Week

3 Oil Stocks to Buy as Crude Prices Barrel Toward $100

Why Energy Stocks Are Up Big This Week