The programmatic advertising company's nascent and lucrative CTV business is approaching half of its top line.

Telaria (TLRA), a company that helps premium video publishers optimize the yield of their digital advertising inventory, continued to make progress in the third quarter on its transformation to a programmatic advertising platform focused primarily on connected TV (CTV).

CTV revenue during the third quarter soared to 44% of revenue -- up from 25% of revenue in the year-ago quarter. 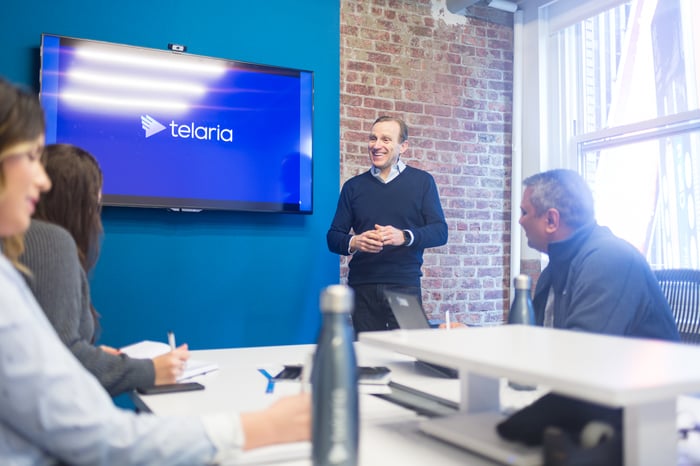 Total revenue rose 23% year over year to $16.6 million, coming in at the high end of management's guidance range for the period of $16 million to $17 million. Powering the quarter's results was a 115% year-over-year increase in CTV revenue.

"This was another strong quarter for Telaria reflecting the successful execution of our strategy as we continue to fortify our leadership position in the CTV space," CEO Mark Zagorski said in the company's third-quarter earnings release. "CTV is now approaching a majority of our revenue and continues to be our core strategic focus and biggest growth driver."

Telaria's growth in its lucrative CTV business is driving up its effective cost per mille (eCPM) -- or the amount an advertiser pays Telaria per thousand ad impressions. The company's eCPM rose to an all-time high of $15.68 in Q3. This translates to 27% year-over-year growth for the key metric.

In the company's earnings call, management said its CTV business has had a strong start so far in Q4 and should grow to represent an even larger portion of revenue during the period, boding well for the important holiday quarter. It expects CTV to represent more than half of revenue by sometime during the first half of next year. With the core CTV business operating at an 88% gross margin (higher than the company's consolidated gross profit margin), investors should want this business to grow as a percentage of revenue.

The company guided for full-year revenue in a range of $69 million to $71 million. The midpoint of this range implies 27% year-over-year growth for Telaria's top line in 2019.

While the software company's adjusted earnings before interest, taxes, depreciation, and amortization (EBITDA) in its third quarter was negative $300,000, down from breakeven in the year-ago quarter, it is still on track to swing from a negative to a positive number for this metric on a full-year basis. Telaria guided for full-year adjusted EBITDA ranging from $2 million to $4 million. This compares with adjusted EBITDA of negative $400,000 in 2018.

"As programmatic CTV continues to scale, we believe we are well positioned to take advantage of this growth," Zagorski said in the company's third-quarter update.