This company is the best way for investors to profit from the rise of streaming TV -- and it's not Netflix, Roku, or The Trade Desk.

As a new decade begins, it's a great time for investors to review the stocks in their portfolio. This is especially the case after a year of strong returns for the market. The S&P 500 climbed nearly 30% in 2019, which has left some stocks less attractive -- and others overvalued.

One stock that could help balance out a portfolio after such a bullish run is Telaria (TLRA) -- a high-quality company that has largely flown under the radar and is trading at a bargain valuation. The sub-$400 million digital advertising specialist has strong fundamentals and a massive addressable market.

Not only is Telaria my top stock pick for 2020, but I'm also putting my money where my mouth is: The stock is my largest holding by a wide margin. 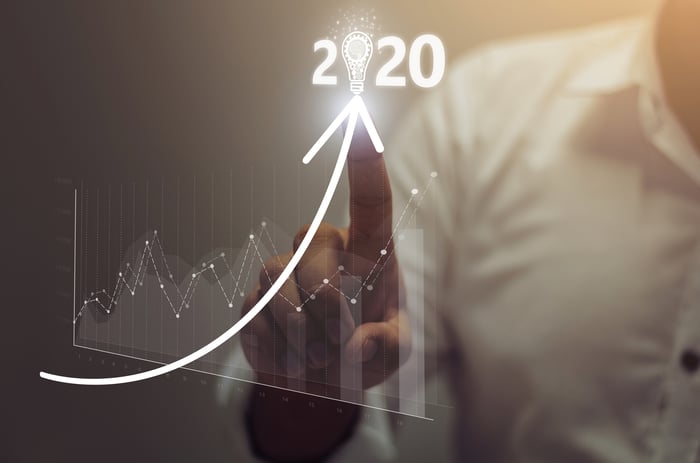 Following a multiyear transformation process that included hiring a new CEO, the sale of its buy-side ad technology platform so it could focus solely on the supply side, and a move to double down on connected TV (CTV), Telaria has morphed into a leader in one of the fastest-growing areas of advertising: CTV programmatic advertising.

Telaria's trailing-nine-month results reflect its impressive momentum. Revenue over this time frame is up 36% year over year; gross profits climbed 24%; and adjusted earnings before interest, taxes, depreciation, and amortization (EBITDA) narrowed from a loss of $4.4 million to a loss of $1.7 million. Yet even these figures don't fully appreciate how much Telaria's business has improved since they don't include the important holiday quarter -- a period when TV advertising spend ramps up significantly. Management expects full-year adjusted EBITDA to be between $2 million and $4 million, up from a loss of $400,000 in 2018.

A few other metrics highlight Telaria's sound financials, including its 82% trailing-12-month gross profit margin and its $15 million in free cash flow over that time frame. In addition, it has no debt on its balance sheet and boasts $66 million in cash and cash equivalents.

But even Telaria's rapid revenue growth and improving profitability understate the tech company's momentum. To more clearly understand why its prospects are so strong, investors should take a closer look at its CTV revenue.

CTV revenue soared 115% year over year in Q3, and now represents 44% of the top line. It accounted for 25% of revenue in Q3 2018 and 6% of revenue in Q3 2017. Just over three years ago, the company didn't have any CTV revenue. This growth reflects the leadership position the company has carved out for itself when it comes to helping premium video distributors like Sling, Hulu, Fox News, MLB.tv, and ABC News optimize yield on their programmatic digital video ad inventory.

Despite the rapid growth Telaria has seen already in its CTV business, there's far more upside ahead. Of the more than $70 billion expected to be spent on TV ads in 2019, only around $7 billion is forecast to be spent on CTV -- and likely less than half of this CTV ad spend will be transacted programmatically -- Telaria's bread and butter.

We can expect that linear TV advertising spend will continue to shift to CTV, reflecting content companies' growing investments in streaming services they attempt to compensate for the cord-cutting trend. Total ad spend in CTV is forecast to exceed $10 billion by 2021.

More importantly for Telaria, the portion of CTV ad spend that is programmatic will likely rise much more rapidly than the total. Ad buyers and sellers will increasingly look for the same measurability and optimization they have become familiar with on desktop and mobile platforms. Unsurprisingly, it's already clear that a major shift toward programmatic is happening in CTV advertising. As Telaria VP of Product Marketing Steve Kondonijakos said in a recent blog post on the company's website, "growth of programmatic CTV has already outpaced the growth of programmatic spend on desktop and mobile."

Strong fundamentals, a powerful catalyst, and an attractive addressable market are great. But investors can't make an informed decision about an investment without also considering valuation. Fortunately, this may be where Telaria shines the most, particularly when compared to The Trade Desk (TTD -2.79%) and Roku (ROKU -0.42%) -- two other companies benefiting from the tailwinds of soaring ad spend in connected TV.

Telaria trades at just 6 times sales while The Trade Desk and Roku have price-to-sales ratios of 19 and 16, respectively. Similarly, Telaria's price-to-gross profit ratio of 7 is far lower than The Trade Desk's 25 and Roku's 35.

Anyone considering investing in Telaria should also be aware that on Dec. 19, it announced a deal to merge with sell-side ad tech company Rubicon Project (MGNI -3.00%). The result will be the world's largest independent sell-side advertising platform.

The deal, which is subject to shareholder votes, regulatory approval, and other customary closing conditions, is expected to close during the first half of 2020. The agreement stipulates that each Telaria share will be exchanged for 1.082 Rubicon Project shares, giving former Telaria shareholders approximately 47.1% of the combined company.

For the trailing-12-month period ending Sept. 30, the combined company would have reported $217 million in revenue -- a figure that was up 32% year over year. Further, it would have had $150 million in cash and no debt.

By combining, the two companies believe they can accelerate Telaria's CTV business, benefit from $15 to $20 million in annual cost savings, and better serve customers with a single supply-side platform and improved tools for publishers. The merger would also make Rubicon an indispensable partner to buyers, giving platforms like The Trade Desk access to quality, scaled inventory across all channels.

As one analyst recently put it, the combined company can become "the Trade Desk of the buy side."

Of course, there's always a chance that things may not play out as expected. Further, shares could trade erratically in the short term, even if Telaria's revenue and profitability improve significantly in the coming years. As famed investor Benjamin Graham has said, "In the short run, the market is a voting machine but in the long run, it is a weighing machine."

But there are several business-specific risks Telaria investors should keep an eye on as well.

The first is the company's ability to manage its non-CTV revenue. Though it seems to be doing everything right when it comes to CTV, revenue from desktop and mobile video still represent over half of the top line. Because of headwinds in desktop, Telaria's non-CTV revenue fell from about $10 million in Q3 2018 to $9.3 million in Q3 2019. If the deterioration of this non-CTV business worsens, this could weigh meaningfully on the company's consolidated results.

Fortunately, Telaria's merger with Rubicon could address this problem, as Rubicon is thriving in the channels where Telaria isn't. But this brings us to a second risk: While unlikely, it's always possible that Telaria's merger with Rubicon won't go through. If it fails, Rubicon may begin investing heavily in CTV -- an area where it only has a nascent offering. If Rubicon succeeds in growing its CTV business, the company could take share from Telaria.

Notably, Telaria currently has a major competitive advantage when it comes to competition. Its two biggest sell-side CTV competitors are FreeWheel and SpotX, both of which have compromised value propositions to content publishers since they are owned by cable companies (a content publisher generally doesn't want to partner with a platform that is funding a competing content publisher). But investors will still want to keep an eye on the competitive environment; mergers, spin-offs, and acquisitions could change things quickly.

A bet on programmatic adverting and connected TV

Long story short, I believe Telaria is the market's best avenue for investing in the confluence of two undeniable trends we will see in the new decade: the rise of programmatic advertising and the growth of connected TV.

Investors have aggressively bought up The Trade Desk shares in recent years because they've recognized the compelling economics in buy-side ad tech. But the market hasn't quite figured out who will come out on top on the sell side. Therefore, there's still time to profit from buying Telaria stock before the masses realize the scale of this opportunity.