There are three essential themes in the company's upcoming quarterly filing.

Online used-car sales platform Carvana ( CVNA -1.62% ) reports fiscal third-quarter 2019 earnings on Wednesday, after the markets close for trading. The rampantly growing auto intermediary has chalked up a share-price return of 78% over the last twelve months.

Below, let's key in on three themes which will largely determine whether Carvana's shares maintain their positive trend.

The stock has appreciated 550% since its initial public offering in April 2017, and Carvana's rapid revenue growth is the foremost catalyst behind that. In the second quarter of 2019, Carvana's top line increased 108% to $986 million, and the car seller recorded its 22nd consecutive quarter of double-digit year-over-year revenue expansion.

In the first two quarters of 2019, Carvana has booked $1.74 billion in total revenue, which also marks an advance of 108% over the comparable period. The company doesn't issue quarterly guidance, but expects full-year revenue to land between $3.6 billion and $3.7 billion, for an increase of 84% to 89% over 2018's top line.

Thus, both the third and fourth quarters are slated to exhibit a deceleration in growth rate versus the first two quarters of the year. To meet the midpoint of full-year guidance, revenue in the back half of 2019 will need to hit a growth rate of at least 87%.

Since Carvana's fourth quarters tend to be stronger than its third quarters, it's reasonable to assume that investors will be satisfied with third-quarter expansion of between 80% and 90% against the $535 million posted in Q3 2018 -- give or take a few percentage points on each end. 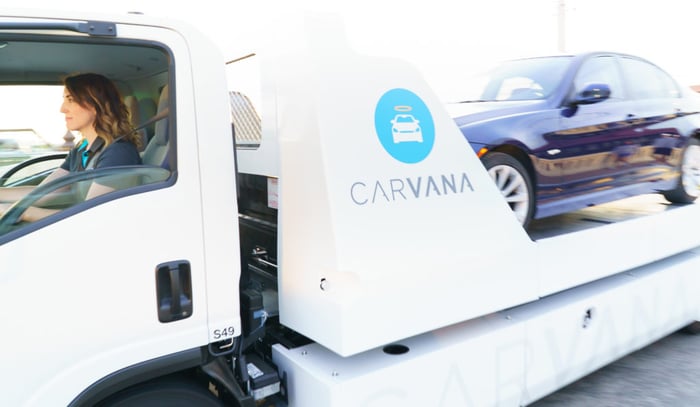 Carvana exhibited considerable progress last quarter on meeting a multiyear goal of pushing vehicle-level gross profit past the $3,000 level. Excluding the effects of a milestone compensation gift to employees in the third quarter of 2018 ("ex-gift"), gross profit per unit (GPU) hit $3,175 in the second quarter of 2019. This represents a leap of 46% over the comparable quarter's GPU.

GPU is climbing in fiscal 2019 due to two overriding factors. First, the company is seeing a sharp rise in the cars it acquires from customers, as it's ramped up both marketing and investment in its online platform to facilitate such purchases. Acquiring inventory from customers results in higher-margin sales than purchasing cars from wholesalers and other third parties.

The second factor juicing gross profit is Carvana's increasing monetization of its customer receivables, in which the company essentially securitizes (that is, bundles and sells) the auto purchase loans it provides to customers. At $1,532, finance GPU, which includes auto loan securitization, accounted for just under half of total ex-gift GPU in the second quarter.

Carvana has averaged ex-gift GPU of $2,836 through the first two quarters of 2019, and its outlook calls for full-year gross profit per unit ex-gift of between $2,650 and $2,850. Thus, for the third and fourth quarters, gross profit is likely to decline from the second-quarter peak of $3,175.

Management pointed out last quarter that finance GPU enjoyed a favorable impact of $100 to $150 from a decline in benchmark interest rates, which isn't likely to repeat in the back half of the year. Incorporating this information and accounting for the momentum in both retail and finance GPU, both the third and fourth quarters may see ex-gift GPU near the top of the full-year projected range of $2,850.

A trend of declining losses

Carvana isn't yet a profitable operation, but it's making appreciable strides in this direction. The key metric that management focuses on in this regard is EBITDA (earnings before interest, taxes, depreciation and amortization) margin, divided by sales.

In 2018, Carvana posted an EBITDA margin, ex-gift, of negative 10%. EBITDA margin improved to negative 7.4% and negative 3.3% in the first and second quarters of 2019, respectively. The positive trend is a function of rising retail unit sales and the company's wider GPU margins.

Carvana is forecasting full-year EBITDA margin, ex-gift, to fall between negative 5.5% and negative 3.5%. Given the sales and profit trends discussed above, look for the third-quarter result to be closer to the second quarter's negative 3.3% mark.

While profitability under generally accepted accounting principles (GAAP) is likely several quarters away, a steady march toward positive EBITDA is another factor supporting this consumer discretionary dynamo's recent rise in share price.

Why Carvana Stock Put the Pedal to the Metal Today

Why Carvana Shares Are Up 4% Today