Please ensure Javascript is enabled for purposes of website accessibility
Free Article Join Over 1 Million Premium Members And Get More In-Depth Stock Guidance and Research
By Billy Duberstein - Nov 5, 2019 at 12:05AM

Shares of Advanced Micro Devices ( AMD -4.43% ) climbed 17% in October, according to data from S&P Global Market Intelligence. The rising chipmaker benefited from the easing of tensions between the United States and China, as well as a solid third-quarter earnings report and bullish guidance for the current quarter.

The first bit of good news for AMD happened on Oct. 11, when the Trump administration announced the broad outlines of a "trade truce" with China and suspended a tariff increase that had been scheduled for Oct. 15.

That helped AMD's stock, because semiconductors have been front and center in the U.S.-China trade war, since China is a big buyer of chips and much of the world's technology supply chain runs through the country. As such, any good news on the trade front is generally a big plus for semiconductor stocks. 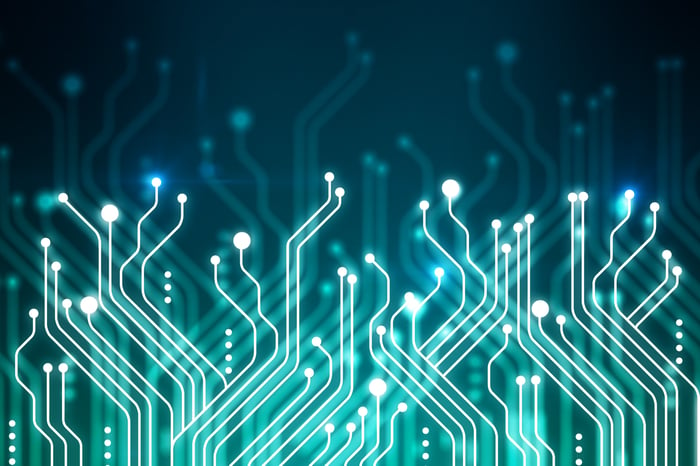 Then AMD reported third-quarter earnings on Oct. 29. Though AMD's revenue missed expectations and profit was only in line with analyst expectations, AMD still delivered strong sequential growth, confirming that the semiconductor cycle had hit bottom and that the company's recently released 7nm chips were taking hold in the marketplace. The company also guided to strong 48% year-over-year and 17% sequential growth for the upcoming fourth quarter, adding fuel to the fire for AMD's current win streak. AMD guided to 44% gross margin as well, which is at the high end of its forecast.

AMD is seeing success with the release of its recent 7nm chips, where it has beaten Intel ( INTC -0.51% ) to become the first chipmaker at this leading-edge node. Specifically, AMD noted a 50% increase in OEM laptops using its 7nm Ryzen CPUs, as well as a 50% sequential increase in shipments of its second-generation EPYC chip for the data center. The company also noted that EPYC had won new business from basically all of the major cloud computing vendors.

In all, AMD's renaissance appears to be on track, as its first-to-market 7nm chips are catching on, and an easing of U.S.-China trade tensions is adding fuel to the fire.